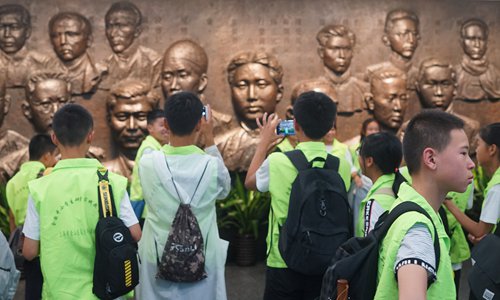 Students visit the museum of the First National Congress of the Communist Party of China on Thursday. (Photo: Global Times)

Chinese post-millennials are passionate about Party stories and visiting the birthplace of the Communist Party of China (CPC) in Shanghai during their summer holiday.

Located in a brick-and-wood building on Xingye Road in Shanghai, the site of the First National Congress of the Communist Party of China is packed with young visitors during summer holiday, the Global Times found on Thursday.

Visitors need to line up for at least 30 minutes. As of Thursday, the site has received 47,380 students since January, Shen Wei, deputy director of the site's publicity and education department, told the Global Times.

Teachers and students reached by the Global Times at the site showed great passion for Party history and stories. A teacher from Xiangtan, Central China's Hunan Province surnamed Zhou, told the Global Times that visiting the site helps students learn what they cannot get from textbooks.

The teacher said students are born in a prosperous era and need to understand the contributions of former generations.

Zhou Hong, another teacher form Southwest China's Guizhou Province who took 45 students to the site on Thursday, told the Global Times that students are very passionate about the red tourism site. The visit will encourage them to contribute to society, Zhou said.

"We benefit a lot from visiting the site. We understand that it is not easy for our country to make such a development, so as teenagers, we shall make efforts for and contributions to the country," said Wang Juanjuan, a middle-school student from Guizhou.

After hearing stories of soldiers who sacrificed their lives for the country, a 9-year-old boy surnamed Xu told the Global Times, "I was touched by the story. I will learn the patriotic spirit from them."

To attract visitors born after 2000, the site initiated a project - listening to post-2000s tell stories of Party building - in 2019. It has attracted more than 15,400 students to the site so far.

About 50 teachers and experts were selected to give lectures to students in batches while they visit the site. As part of the program, after visiting, students will be organized to write a composition, said Shen, who is also the program leader.

Shen said that inviting young students to the site will better help them understand history and nurture in them the communist ideal and correct values.

In 1921, delegates representing about 50 CPC members nationwide convened the first national congress in the building. The historic building has been open to the public as a museum since 1952.

Xi said the aim of the tour was to revisit the Party's past - especially the history of its founding - to learn from the predecessors of revolutionary times and their noble spirit.

"Only by remaining true to our original aspiration, keeping our mission firmly in mind, and keeping on striving, could the Party stay young and live," said Xi.

During the past two years, the site in Shanghai has been a popular place for Chinese Party members and for red tourism.