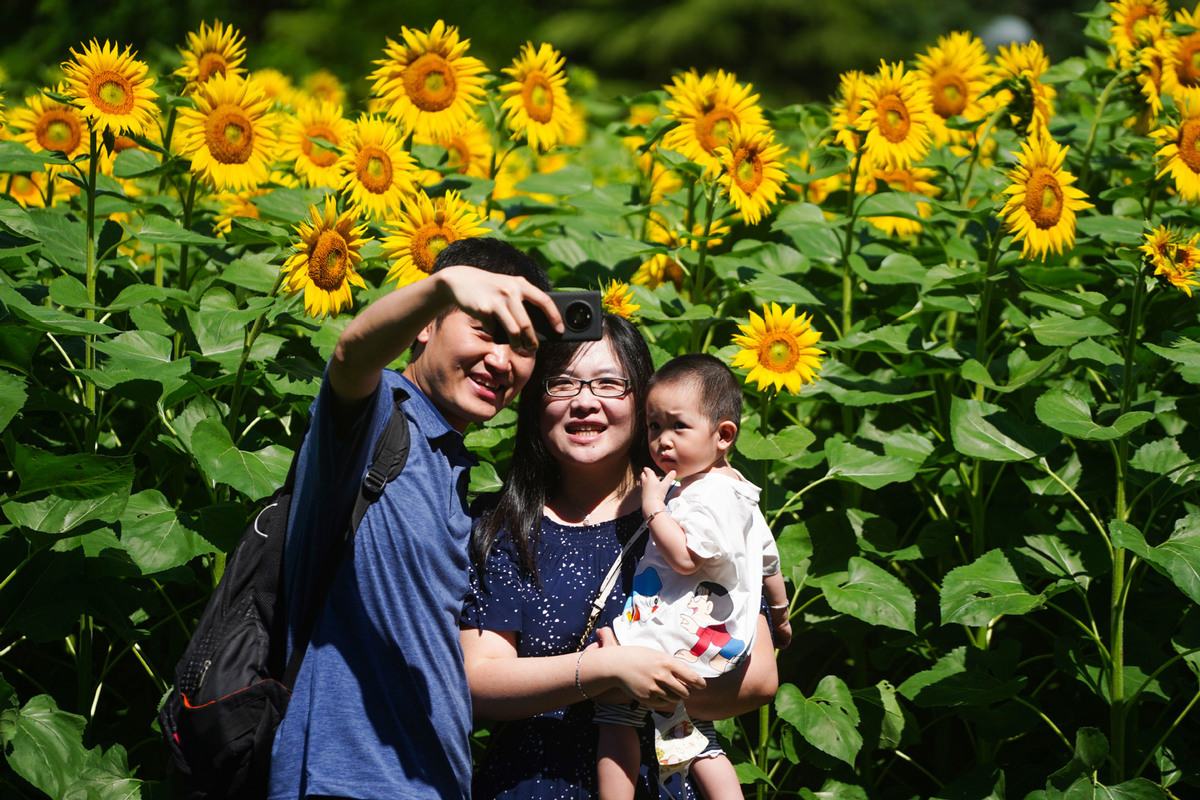 A family takes photos against a backdrop of blooming sunflowers at the Olympic Forest Park in Beijing, on July 4, 2021. (Photo: Xinhua)

The Communist Party of China has ended domestic poverty and significantly bolstered human rights in the world's most populous country, ranging from the implementation of social safety nets to ensuring women's rights and offering welfare to migrant workers, a white paper said on Thursday.

The five-chapter paper was released by the State Council Information Office to mark the Party's success in turning China, with a population of 1.4 billion population, into a "moderately prosperous society in all respects" this year, a watershed effort in the nation's modernization process.

It said that the anti-poverty campaign that ended in success earlier this year helped pull almost 100 million rural residents out of absolute poverty and ensured their access to food, clean water, education and healthcare, which are crucial human rights.

Further, the central authorities have worked for decades to create a sturdier insurance safety net in the nation, the report added.

It said by the end of last year, China's healthcare plans had covered 1.36 billion residents, and maternity insurance, which compensates costs related to childbirth, had covered 235 million people. For religious personnel, healthcare and pension fund coverage had reached 96.5 percent and 89.6 percent, respectively.

By June, 467 million urbanites and 547 million rural residents had been covered by the pension fund system. Also by that month, 273 million people had been protected by work injury insurance, a crucial part of the nation's job security package that provides compensation for workplace injuries or death, given the rise of informal employment and the booming gig economy.

As China moves to vitalize its rural regions in the coming decades, more migrants are returning home to work closer to their families. In addition, the government also launched campaigns to make it easier for migrants to educate children in the cities they work. The vitalization effort coupled with those campaigns helped slashed the number of so-called left-behind children from 9.02 million to 6.43 million between 2016 and last year.

Moreover, migrant workers have seen their monthly pay almost double over the past eight years to 4,072 yuan, and many have enjoyed more spacious dormitories equipped with bathrooms.

Meanwhile, eying improved gender equality, the CPC has managed to curb illiteracy among women and has bolstered their economic standing and presence in politics.

The report said the illiteracy rate among women aged 15 and above was 7.3 percent in 2017, down from 20.5 percent in 1979, a year after China started to adopt market-oriented reforms. Further, the percentage of women studying in higher education institutions reached 51.7 percent, up from 24.1 percent in 1978.