CPC increases its presence in business sector, including foreign-funded enterprises 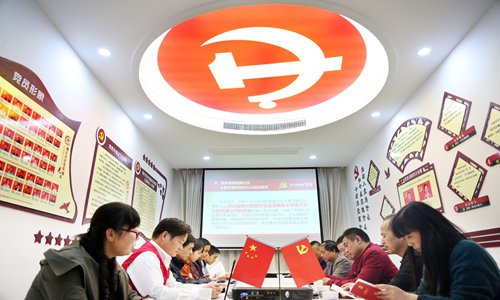 "How can a Communist organization coexist with a German enterprise? Will it affect our business?" Those and other thoughts were the concern of German-Chinese Yang Zhiming, the manager of the Nanchang subsidiary of the medical supply company Fresenius Kabi, when members of the Communist Party of China (CPC) proposed setting up a branch there. "The Chinese and Germans have different cultures, different customs and different ways of thinking. We were afraid that the Party might interfere with our business," explained Yang. So, what changed their minds? One reason was the behavior of CPC members at the subsidiary in responding to a labor shortage problem, where they got the entire staff to pitch in on a recruitment drive. They also used this effort to help iron out any other disputes within the company. More responsible The German managers found the CPC members to be more disciplined and willing to take on challenging tasks and, they would take on more responsibilities and show an interest in the business. A Party branch was then set up at the subsidiary in 2016, with the approval of the German head office. Zheng Changzhong, a Party development specialist at Shanghai's Fudan University, said, "CPC membership is not just a matter of political identity, but a symbol of excellence, where moral integrity and competence in one's work are both criteria. That's what makes the CPC different." A similar transition took place at a shopping mall in the city of Nanchang, capital of Jiangxi Province, owned by the German retailer Metro Group, where the management's attitude about Party members underwent a change. "Once we had a big order to fill and our forklift broke down," said Chen Siying, head of the company's Party branch, "and some CPC members worked nonstop for more than 10 hours, loading the freight with their bare hands." Now, as a result, CPC membership is a preferred qualification for any new staff.  The CPC Constitution calls for a member to be in the vanguard in the fight for the working class and, they should serve the people wholeheartedly and be ready to make any personal sacrifice.  Increasing presenceIt's not surprising that the CPC has increased its presence in the business sector in the past few years, with foreign-funded enterprises and joint ventures being a key part of the expansion. The CPC Constitution states that the Party exercises overall leadership over all areas and every part of the country and this was reaffirmed at the recent 19th CPC National Congress. Now, there is a major campaign to keep up the spirit of the congress that involves all Party members. For those at the Sedrin Brewery Co., Ltd., the Nanchang subsidiary of the Belgian brewer AB InBev, the spirit of the congress can be felt. The Party branch at Sedrin has 18 members and a clear organizational structure and set of internal regulations.  "To give people a better life, we need both technology and craftsmanship and to improve the quality of our products. That is how we'll implement the congress spirit," commented Zheng Wenqing, head of the company's CPC branch during a class in Party theory. On October 18, CPC members at the company watched the opening session of the 19th CPC National Congress on television and discussed the revised CPC Constitution. In Nanchang, CPC branches at foreign enterprises have organized more activities since the congress and some Party members have been given more time for study and discussions. China has more than 100,000 foreign-funded enterprises, 70 percent of which had Party organizations at the end of 2016, said Qi Yu, deputy head of the CPC Central Committee Organization Department.