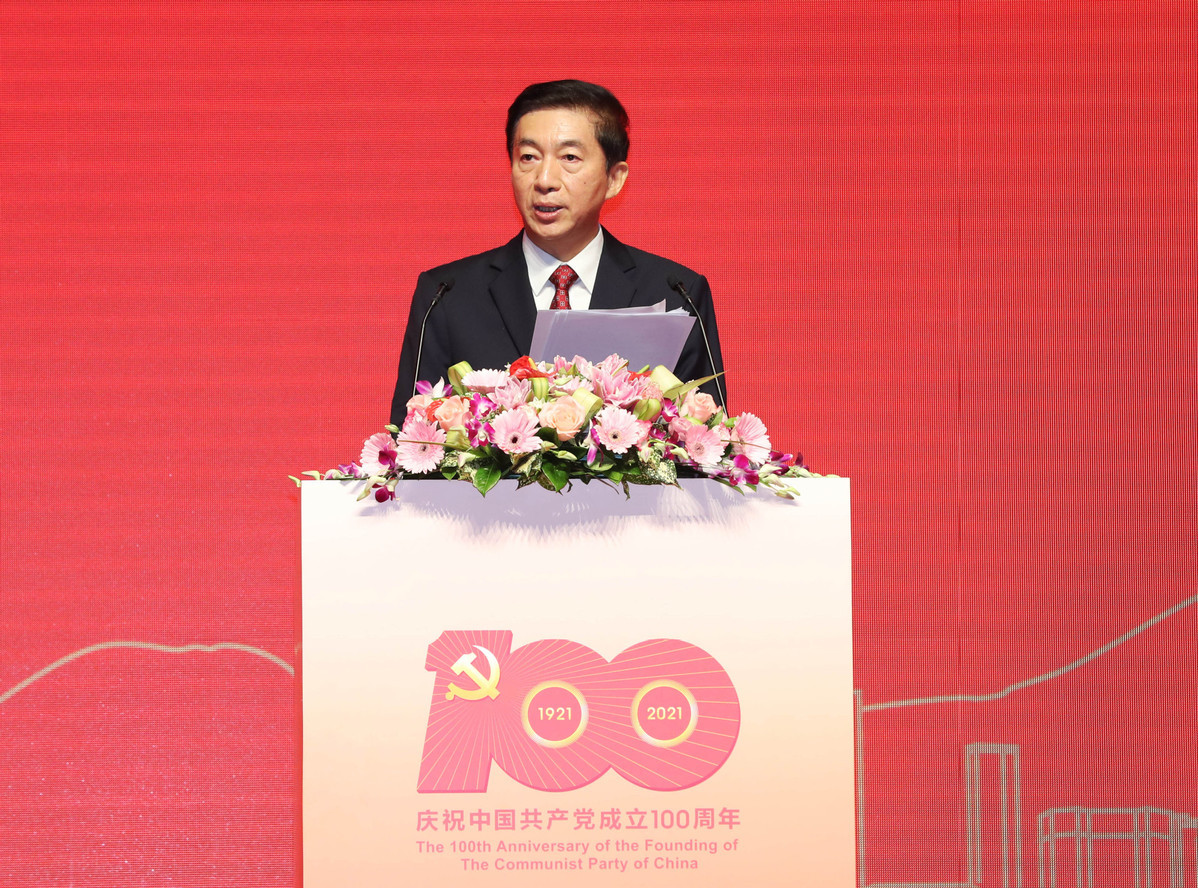 Luo Huining, director of the Liaison Office of the Central People's Government in the HKSAR delivers a keynote address at a high-level seminar on the relationship between the Communist Part of China and the "one country, two systems" at the Hong Kong Convention and Exhibition Centre on June 12, 2021. (Photo: Xinhua)

It is imperative to uphold the leadership of the Communist Party of China in advancing the cause of "one country, two systems", Beijing's top liaison officer in the Hong Kong Special Administrative Region said at a seminar in the city on Saturday.

The high-level seminar, attended by Luo Huining, director of the Liaison Office of the Central People's Government in the HKSAR, and other high-ranking national and local officials, was held to celebrate the 100th anniversary of the Party, which falls on July 1.

In his keynote speech at the seminar, Luo said it is a historical fact that without the leadership of the CPC, there would be no smooth handover of Hong Kong, nor the prosperity and stability after its return.

He cited the "timely and decisive" efforts made by the CPC Central Committee to put "one country, two systems" on the correct path and to transform Hong Kong from chaos to order after the turbulence over the extradition bill in 2019. Those efforts included promulgating the Law of the People's Republic of China on Safeguarding National Security in the Hong Kong Special Administrative Region and improving the SAR's electoral systems.

"No one better appreciates the value of 'one country, two systems' or is more committed to the original aspirations of this policy than the CPC.

The liaison chief also noted that the destiny of Hong Kong has always been intertwined with that of the motherland. The country remains the strongest source of support for the betterment of Hong Kong.

Addressing the forum, Hong Kong Chief Executive Carrie Lam Cheng Yuet-ngor said Hong Kong's smooth return to the motherland is a significant part of the Party's achievements made during the past century.

The Party and the central government designed the "one country, two systems" framework to enable Hong Kong people to retain as much as possible their familiar institutional setting and way of life, she said.

Leung Chun-ying, vice-chairman of the National Committee of the Chinese People's Political Consultative Conference, said that with the "one country, two systems" principle, the Party has set the precedent of peacefully resolving territorial and sovereignty issues left over by history.

The seminar also featured a panel discussion moderated by Wang Songmiao, who assumed the office of secretary-general at the liaison office in February, and it was attended by some of the city's political leaders.

Lau Siu-kai, vice-president of the Chinese Association of Hong Kong and Macao Studies and one of the panel guests, said the vitality of "one country, two systems" lies in its forward-looking and self-correcting mechanism. Under the principle, the central government exercises overall jurisdiction over Hong Kong, which enjoys a high degree of autonomy. That makes it possible for Hong Kong to return to the right track without a complete overhaul of the institutional setting, he added.

The event, with around 650 participants, was co-organized by the HKSAR government and four central authorities' organizations in Hong Kong－the liaison office, the Office of the Commissioner of the Ministry of Foreign Affairs of China in the HKSAR, the Office for Safeguarding National Security of the Central People's Government in the HKSAR and the Hong Kong Garrison of the Chinese People's Liberation Army.