BEIJING, Aug. 26 (Xinhua) - The Publicity Department of the Communist Party of China (CPC) Central Committee on Thursday released a key publication on the Party's mission and contributions. 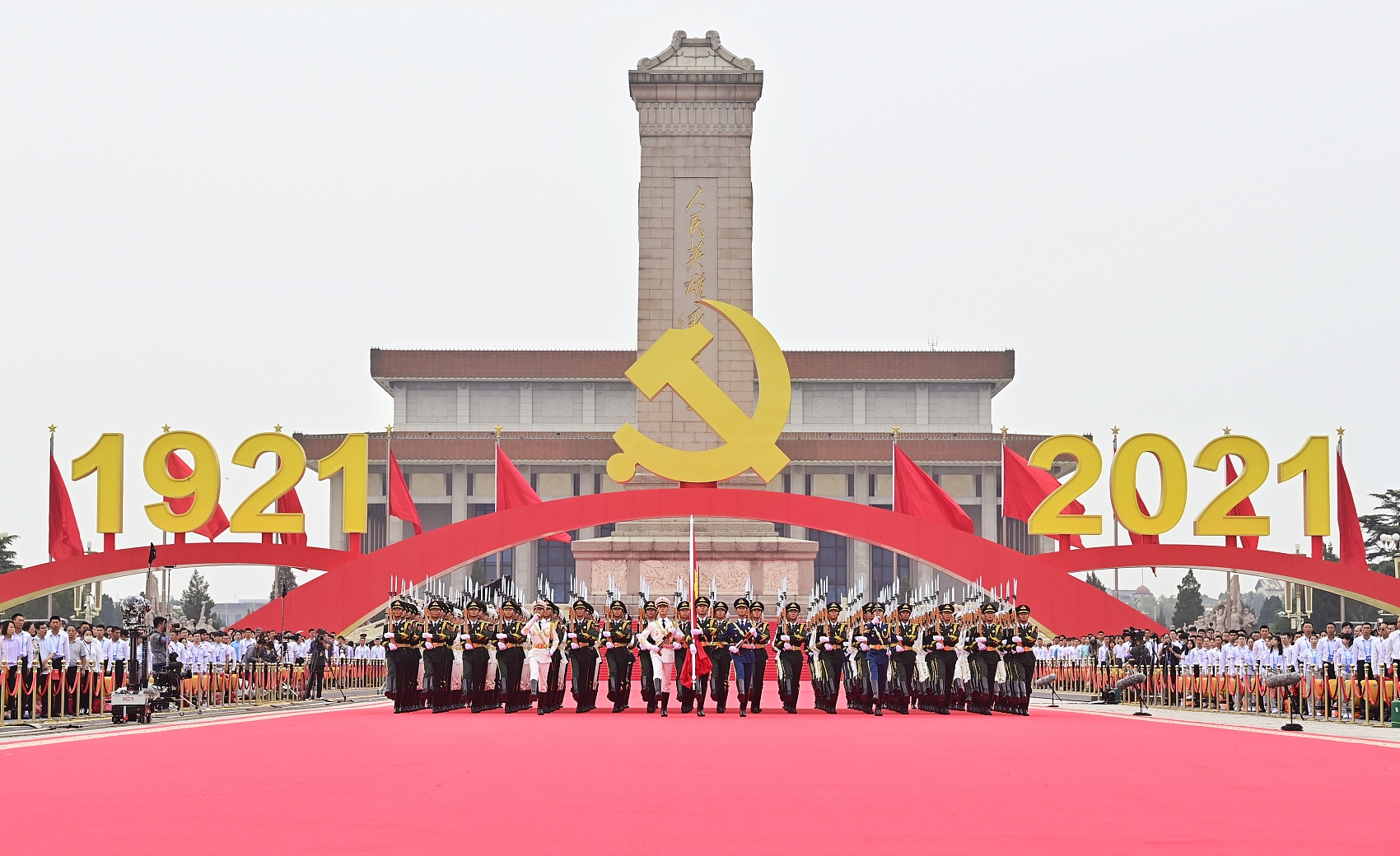 A flag-raising ceremony is held during a grand gathering celebrating the Communist Party of China (CPC) centenary at Tian'anmen Square in Beijing, capital of China, July 1, 2021. (Photo: Xinhua)

The document, titled "The CPC: Its Mission and Contributions," stressed that over the past hundred years, all the struggles, sacrifices and efforts made by the CPC and by the Chinese people under its leadership have been directed to one goal -- the rejuvenation of the Chinese nation.

It added that "achieving national rejuvenation is the historic mission of the CPC," and the Party "has made an unbreakable commitment to bring the people a happy life."

It also pointed out that the CPC is dedicated to the people and forever puts their interests first. It said the CPC follows the underlying trends of social development and respects the people's principal role in making history.

The CPC pursues the lofty goal of working for the wellbeing of the Chinese people, and it does everything in the interests of the people, the document said.

The document said that Marxism is the single guiding ideology, the very soul of the CPC, and the banner under which it strives.

According to the document, in order to achieve independence, development, and prosperity, the CPC must have robust and decisive leadership.

"It is the CPC's solidarity and unity, its firm leadership, and its strong governance capability that have rallied and united hundreds of millions of the Chinese people and overcome a multitude of difficulties and crises," it said.

Also, the document said the CPC has always been able to maintain vigor and vitality and stand at the forefront of the times despite the many hardships it has endured in the past hundred years.

This is because the Party has constantly engaged in significant self-reform while leading the people in a great social revolution. To maintain its health and vigor, the CPC exercises effective self-supervision, practices strict self-discipline in every respect, consistently pursues improvement, and advances with the times, the document said.

Moreover, it stressed that the CPC is a political party that seeks happiness for the people and progress for humanity. The CPC has always pursued the shared human values of peace, development, fairness, justice, democracy and freedom. It has championed internationalism, stood on the right side of history and the progressive side of humanity, and contributed to world peace and development.

Serving the people wholeheartedly is the abiding mission of the Communist Party of China (CPC), said the publication.

Stressing that the Party is the vanguard of China's working class, the Chinese people, and the Chinese nation, the document noted that "of the people, by the people, for the people" is what has guided the CPC from victory to victory over the past century.

It pointed out that over the past century, through all the changes in the domestic and international environment, whether in good times or bad, the CPC has always put the people first. It has never wavered in fulfilling this commitment.

After China was struck by COVID-19, the CPC and the Chinese government responded swiftly, putting people's lives before all else, organizing massive nucleic acid testing and inoculation, making every effort to identify every case of infection, and doing everything possible to save patients and protect the people's health, the document said.

"The Party and the people work together and share weal and woe, and there is an inseparable bond between them. No attempt to sever that bond will ever succeed, and any attempt to shake the people's faith in the Party's leadership is doomed to fail," said the document.

CPC striving for realization of ideals

The CPC has been working tirelessly to realize its ideals, according to the publication.

Since it was founded in 1921, the Party has never given up on the struggle, whatever hardships, existential trials, or bitter sacrifices it faced, said the document titled "The CPC: Its Mission and Contributions."

These hundred years have seen the CPC fight on, guided by Marxism, and buttressed by firm convictions, an enterprising spirit, and unyielding determination, it noted.

The CPC has upheld Marxism, stayed committed to its ideals and convictions, kept breaking new ground, and defused risks and overcome challenges, according to the document.

On its centennial journey, the CPC has tempered its character with the courage to vanquish formidable enemies, defuse risks, and overcome challenges, the document said, adding this has become the Party's defining quality.

All of its achievements are the results of the hard work of generations of Party members, and the base on which the cause will continue to prosper, the document said.

The success of the Party in the past equips it to face the future with full confidence, according to the document.

The CPC has firm leadership and strong governance capability, said the publication.

Upholding CPC Central Committee's authority and centralized leadership has led to smooth and steady progress in revolution, reconstruction and reform, and ensures the CPC's position as the governing party and the country's long-term stability, according to the publication.

Over the past hundred years, at every historic juncture, the CPC has been able to analyze the situation from an overall, objective and forward-looking perspective, and set forth practical goals, tasks, policies and roadmaps. It is the Party's sound guidelines that have enabled it to carry out its work in a well-organized and systematic manner, the publication said.

Over the past hundred years, the Party has been consistent in building its organization, tightening its discipline and strengthening the rule of law. It has united tens of millions of Party members and organized hundreds of millions of Chinese people, thereby ensuring that its decisions and plans are implemented in a timely, resolute and forceful manner, it said.

The CPC has always been able to maintain vigor and vitality, said the publication.

The CPC has faced up to its problems and mistakes and corrected them by upholding the truth, the publication said, noting that through trial and error, the CPC has grown stronger and better, and continues to lead the people forward.

The Party takes resolute measures against all phenomena that may undermine its integrity and progressive nature, it added.

The Party is committed to studying and reviewing, as well as to drawing on good experience from other countries to strengthen its own capability for revolution, reconstruction and reform, said the publication.

After 100 years of hard struggle, the CPC has the courage and ability to carry out self-reform and is able to meet any challenge and withstand any test, the publication said.

The CPC will never change or betray its nature and will always remain dynamic and grow stronger, it noted.

The CPC is strong because it has always placed the united front in an important position, combining all the forces that can be united, mobilizing all positive factors, and pooling as much strength as possible for collective endeavors, the publication said.

The CPC can realize its overall leadership over state affairs and in all sectors of society because a large number of high-caliber officials play their role to the best of their ability, stated the publication.

The CPC, always championing justice and peace in a complex world, has contributed to world peace and development, said the key publication.

The CPC is committed to pursuing development for both China and the world, and to bringing benefits to all, said the key publication.

"Peaceful development is an everlasting aspiration of the CPC and the salient feature of China's progress," the document said.

Over the past 100 years, pursuing and safeguarding peace, the CPC has led the Chinese people on a new path of national rejuvenation that leads to prosperity rather than hegemony, it said, adding that this path enables China to accelerate its own development and contribute to world peace and development.

The CPC has proposed building a global community of shared future, with the goal of creating an open, inclusive, clean and beautiful world that enjoys lasting peace, universal security, and common prosperity, the document said.