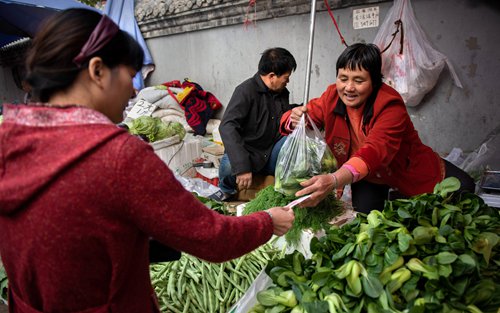 A customer (left) buys vegetables at a market in Beijing. (Photo: VCG)

China's September CPI indicates a "moderate inflation" trend that reflects China's "economic tenacity," experts told the Global Times on Tuesday. China's consumer price index (CPI), a main gauge of inflation, rose by 2.5 percent year-on-year in September, the highest growth in seven months, data from the National Bureau of Statistics (NBS) showed on Tuesday. Domestic CPI rose by 2.3 percent year-on-year in August. The September CPI was released as China's economic prospects were being questioned due to pressure from the ongoing trade disputes between China and the US. The IMF has recently marked down its forecast for Chinese economic growth in 2018 and 2019, citing the US-China trade disputes as a major reason. Resilient economy For three consecutive months, China's CPI growth has been higher than 2 percent."CPI growth between 2 percent and 3 percent is a most reasonable level," Liu Xuezhi, a senior macroeconomics expert at the Bank of Communications, told the Global Times on Tuesday.The government has set this year's CPI goal at around 3 percent.The CPI rise in September was a normal phenomenon, as typhoons in some areas drove up food prices, Liu said.According to Liu, if the Chinese economy really slumps in the future, it would lead to weaker consumer demand and, in turn, the possibility of deflation. But that trend has not emerged considering the CPI statistics released so far. Experts also noted that the CPI data showed that at least for now, China's consumption demand is stable. "The slowly climbing CPI data might be partly caused by rising prices of imported products, as well as the fact that capital is flowing to consumption from capital markets," said Cong Yi, an economics professor at the Tianjin University of Finance and Economics. But it shows the domestic economy is still resilient when facing external pressure, he noted.Statistics from the NBS on Tuesday showed that the CPI rise was driven by a continued climb in food prices. The price of fresh vegetables rose by 9.8 percent on a monthly basis in September, while that of eggs rose by 2.2 percent and the price of fresh fruit rose by 6.4 percent on a monthly basis.  Liu said that inflation pressure is still limited for China. "The price growth of vegetables and fruits is expected to stabilize in autumn. The pork price might rise in the future, but won't significantly push up commodity prices," he said. China's Producer Price Index rose by 3.6 percent in September, down from 4.1 percent in August, according to the NBS data. Continue reforms In terms of the potential economic challenges China is facing because of the trade disputes, experts say that China should insist on reforms to increase internal economic strength. "I don't think the trade disputes will be a real threat to China's economy as long as China continues to deepen reforms," Cong told the Global Times on Tuesday. The government has launched reform measures such as reducing taxes and improving people's livelihood this year, Cong said. But he pointed out that China should speed up institutional reforms. China has also mounted efforts to increase trade, both imports and exports, with other countries while trade with the US is under pressure.