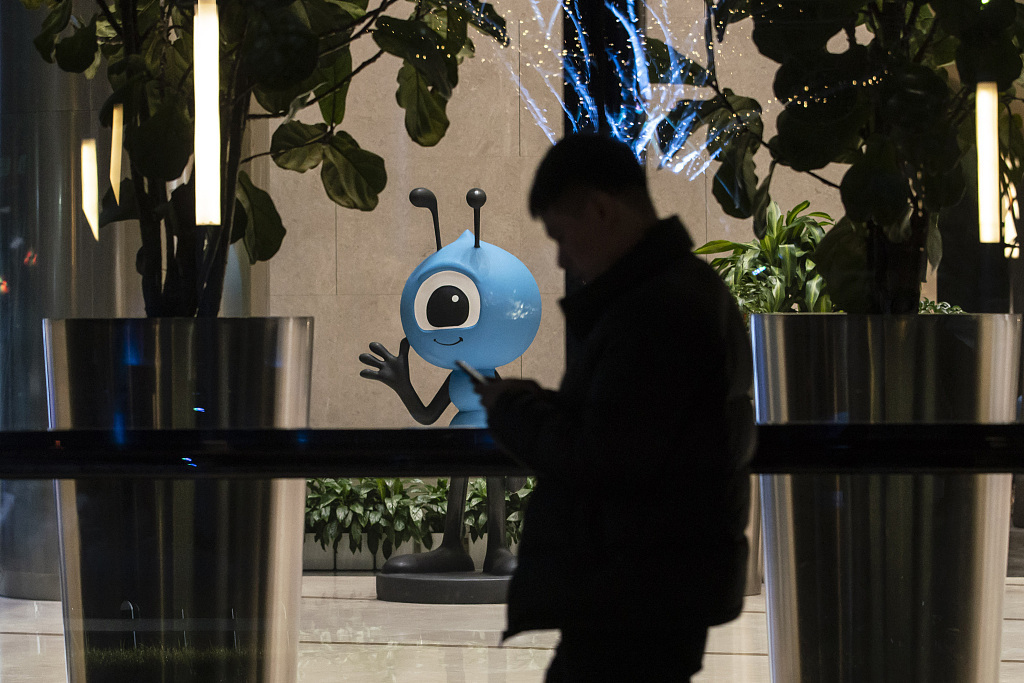 An employee checks his mobile phone while walking through Ant Group's headquarters in Hangzhou, Zhejiang province, on Jan. 20, 2021. (Photo: VCG)

"The fact that these companies exploit online credit loans to fuel young people's consumption as well as companies going public have created legions of billionaires, among other factors, means that the gap between the rich and the poor will be further widened," she said.

Zhao continued, "If they are allowed to develop into juggernauts that will never fall and are not willing to obey supervision, they will bring a wide range of harm to the online, economic, and social environments and pose great systemic risks. It has now come to the critical moment when we have to strengthen supervision, curb monopoly, seek advantages, avoid creating disadvantages, and avoid risks for them."

In her proposal, the political advisor called for drawing on the successful experience and lessons of "separate operation and separate supervision" of China's financial industry as well as practical experience learned from the United States’ splitting up of the Standard Oil Company under its antitrust law. This should help guide dealings with mixed operation business entities by splitting them up and implementing strict separate operations and supervision.

For years, China has stepped up efforts to better regulate the internet industry, aiming to ensure equal participation in market competition for all types of market players. The Draft Revision of the Anti-Monopoly Law, issued in early 2020, added provisions for determining the dominant market position of internet companies.

The anti-trust guidelines on the country's platform economy, which was unveiled in February, encompass a set of rules that could help rein in monopolistic conduct among the country's top internet firms. Last December, China's State Administration for Market Regulation announced the launch of an antitrust investigation into the e-commerce giant Alibaba Group.

Tan Jianfeng, a national political advisor and president of the Shanghai Information Security Trade Association, described how he was concerned about data security. "The nature of the internet is data, and data security is the core of cyberspace security, and it is also the foundation for the healthy development of the internet," Tan said, adding that he planned to submit six proposals, five of which relate to strengthening data security.

He acknowledged that big data can effectively promote the economic transformation and development, but at present, many technologies are used indiscriminately without a bottom line, randomly collecting people's biodata in a way that lacks control measures and presents certain risks.

Tan also suggested that all non-renewable data, such as face scans, fingerprints, and DNA should no longer be collected by the market at will. China should establish a "national data bank" to uniformly manage and control data.

"After a large number of national personal medical files and health files are gathered, they can be used to analyze the country's labor status as well as economic and related industrial development trends. However, if acquired by hostile forces, this same data may cause unpredictable harm to national security and industrial economic development," he warned.