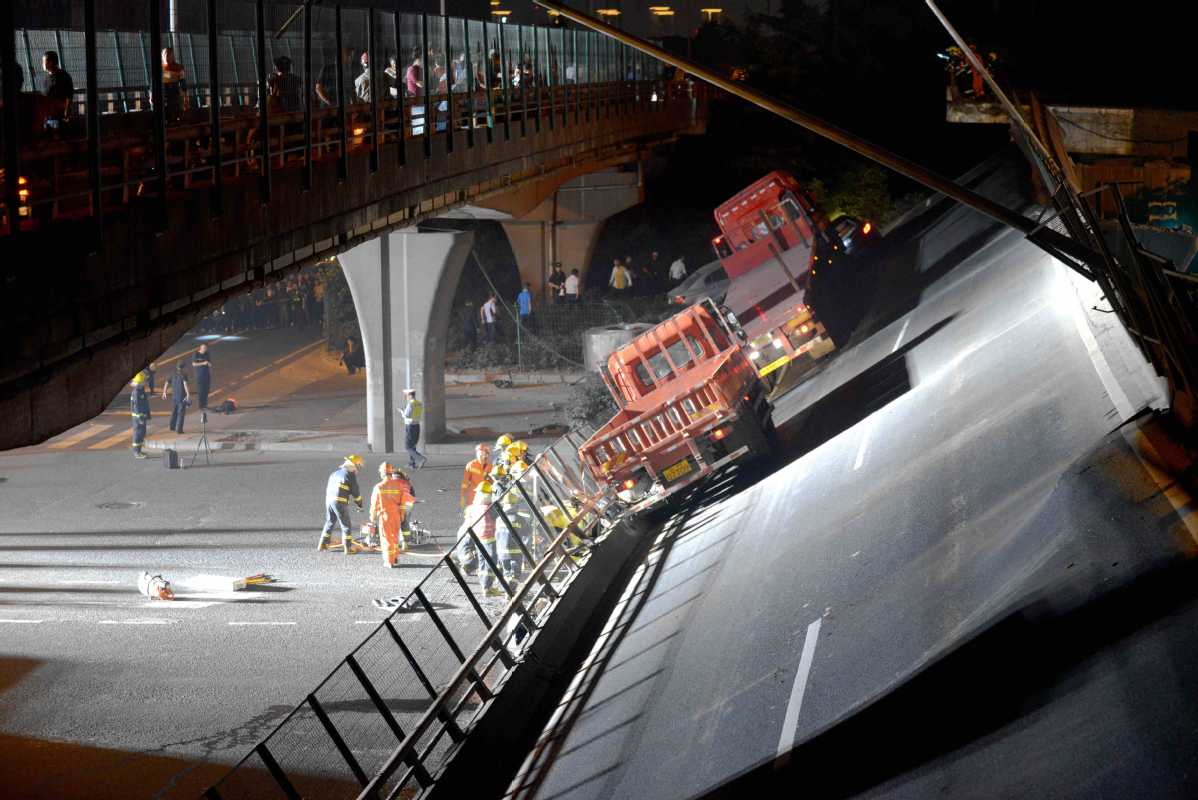 An overpass collapse caused several injuries and damage to vehicles in Wuxi, Jiangsu province on the night of Oct 10, 2019. Rescue work is underway. (Photo: China Daily)

After overloaded freight trucks were blamed for the collapse of an overpass in Wuxi, Jiangsu province, that killed three people on Thursday, transportation authorities around China said over the weekend they will enforce inspections and impose maximum penalties on truck drivers who overload their vehicles.

The collapse happened at about 6:10 pm on Thursday along National Highway 312 after the overpass tipped to one side. A preliminary investigation suggested the collapse was caused by heavily overloaded trucks, Wuxi's city government said in a statement.

"The first truck, carrying seven piles of steel coils, passed the overpass safely," he said. "But the accident happened when the latter truck, carrying six piles, was on the bridge. Each of the two trucks carried more than 100 metric tons of goods."

Ma said both drivers worked for Wuxi Chenggong Transport Company. One of the drivers, surnamed Wang, is being treated in hospital for injuries sustained in the collapse. He has been subjected to coercive measures.

"It will take at least one month for the collapsed overpass to be repaired," he said.

The Jiangsu Transport Bureau held a transportation safety meeting on Saturday morning to strengthen the monitoring of overloaded vehicles. Lu Yongquan, director of the bureau, said at the meeting that those overloading vehicles will be given the most severe punishment according to China's laws and regulations.

China has been trying to ban overloaded freight trucks from its roads for decades, with many drivers and logistics companies having chosen to ignore safety hazards and overload their vehicles to cut transportation costs since the 1980s. It has become one of the most pressing issues for China's transportation authorities.

"As drivers, we are the ones who know the danger of driving overloaded trucks the best," said a veteran freight truck driver from Shandong province who only wanted to give his surname, Lu. "The fact is that if we don't overload we will be out of jobs.

"We would choose the roads with no weighing facilities or inspection officers in the past, but inspections are getting tighter and the fine has also increased in the past two years, so my logistics company had no choice but to raise their prices."

In August, the ministry issued a directive in another attempt to tackle the issue of overloaded trucks, which have been called "the No 1 killer on the road".

According to the directive, trucks that are caught overloading three times within a year will be banned from the roads forever. It also said inspections will start at loading and logistics facilities.

From 2006 to 2016, overloaded vehicles caused 69 bridge collapses and resulted in eight deaths around China, Tao Hanxiang, head of the Ministry of Transport's road network management department, said in 2016 when the ministry introduced new measures to combat overloading and the modification of trucks to carry more goods.

According to accident reports, some trucks that passed over bridges weighed twice the maximum weight the bridge could support, Tao said, adding that the service life of roads would be cut by 80 percent if trucks were overloaded by 50 percent.