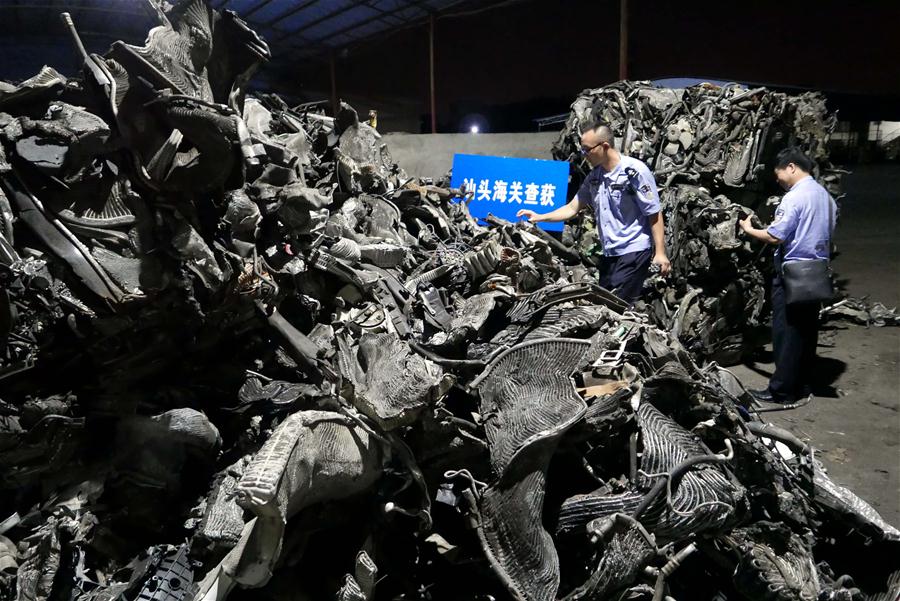 Despite waste imports to China falling almost in half in 2018, the General Administration of Customs said cracking down on smuggling will be a priority this year.

Customs officers across the country investigated 481 criminal cases related to waste smuggling last year, involving about 1.55 million metric tons of garbage, according to the administration. Waste imports dropped 46.5 percent in 2018 from the year before.

During inspections of the 1,155 enterprises with licenses to import plastic waste, the administration found violations in 236. For example, 72 of the companies were suspected of selling their import quotas, according to a China News Service report.

Quota selling was also found in the metals processing industry. Some enterprises holding import licenses for waste metals sold their quotas to smugglers or to unlicensed waste metal processors, both of whom could use the documents to evade detection. Five customs offices, including in Guangzhou, Guangdong province, and Changsha, Hunan province, uncovered 15 such cases involving around 9,000 tons of metal valued at 91 million yuan ($13.5 million), the report said.

It said quota selling was a primary target in five campaigns the administration launched last year to crack down on waste smuggling.

In July 2017, central authorities decided to phase out imported waste and switch to domestic alternatives by 2020. So far, China has banned the import of 40 types of waste. The ban will be further expanded to another eight types in July and another 16 by year's end, according to the Ministry of Ecology and Environment.

This year, customs officers across the country should understand that preventing banned waste from entering China is of "landmark significance" in the country's ecological progress, Ni Yuefeng, head of the customs administration, said during a national conference earlier this month.

"For law enforcement departments, the protection of the environment is a long-term task. It cannot be completed in only one campaign, as many look forward to, but should be conducted in a persistent way," he was quoted as saying by China News Service.

He also called on his colleagues to maintain their tough stance against waste smuggling and to persevere. Port control and inspection processes should be enhanced, he said.

China began importing solid waste as a source of raw material in the 1980s and for years has been the world's largest importer. China imported about 450 million tons of waste in 2016. Some companies bring foreign waste into the country illegally.

Jiang Jianguo, a professor of environmental studies at Tsinghua University, said China decided to ban waste imports because of the mounting pile of domestic trash that needed to be dealt with, and because of the pollution generated in converting waste to new products.