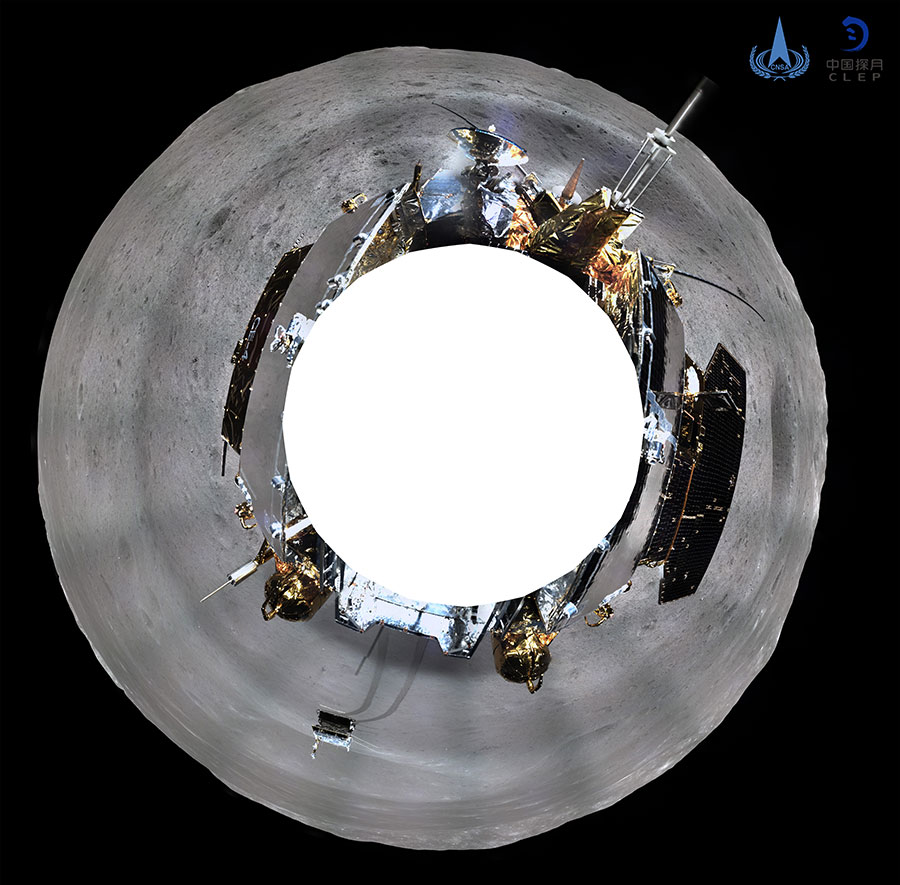 Images sent back from China's Chang'e-4 show that the first-ever probe to soft-land on moon's far side is surrounded by lots of craters of different sizes, which pose a great challenge for future exploration of the lunar rover Yutu-2.

The probe, comprised of a lander and a rover, touched down at the preselected landing area at 177.6 degrees east longitude and 45.5 degrees south latitude in the Von Karman Crater in the South Pole-Aitken (SPA) Basin on the far side of the moon on Jan. 3.

One of the published images is a 360-degree panorama which was pieced together from 80 photos taken by a camera on the lander after the rover drove onto the lunar surface, according to Li Chunlai, deputy director of the National Astronomical Observatories of China and commander-in-chief of the ground application system of Chang'e-4.

"From the panorama, we can see the probe is surrounded by lots of small craters, which was really thrilling," said Li.

One of the craters close to the rover Yutu-2 has a diameter of about 20 meters and a depth of about 4 meters. The rugged terrain will pose great challenges for planning the route of the rover, said Li.

Compared with the landing site of the Chang'e-3, which was sent to the Sinus Iridum, or the Bay of Rainbows, on the moon's near side, fewer rocks can be found in the area surrounding Chang'e-4, indicating the landing area of Chang'e-4 might be older, said Li.

He said the Chang'e-4 landed at an altitude of nearly minus 6,000 meters. The deepest region on the moon, where there is an altitude of minus 9,100 meters, is about 700 kilometers to the south of the probe.

"The information from the depths of the moon will be one of our focuses in the exploration," said Li.

The CNSA also released a video of the landing process of the Chang'e-4, which was produced by processing more than 4,700 pictures taken by a camera on the probe.

The video, lasting about 12 minutes, shows the probe adjusted its altitude, hovered and avoided obstacles during the descent process.

"From the video, we can see more dust was thrown up when the Chang'e-4 touched down on the far side of the moon compared with the landing of Chang'e-3, which indicates that the lunar dust at the landing area of Chang'e-4 is thicker than the region where Chang'e-3 landed," said Zhang Hongbo, chief designer of the ground application system of Chang'e-4.

"The thicker dust shows that the lunar regolith in the region has undergone longer space weathering, which also gives strong evidence of the region being older. We will conduct comparative research between the landing areas of Chang'e-3 and Chang'e-4," Li said.

As a result of the tidal locking effect, the moon's revolution cycle is the same as its rotation cycle. It always faces the earth with the same side, and the far side was a mystery before the age of spacecraft.

Many lunar orbiters had shown the moon's two sides were very different: the near side is relatively flat, while the far side is thickly dotted with impact craters.

The SPA Basin, where the Chang'e-4 probe landed, is the largest and deepest basin in the solar system, with a diameter of 2,500 km and a depth of more than 10 km.

"The far side of the moon has very unique features, and has never been explored on site, so Chang'e-4 might bring us breakthrough findings," said Zou Yongliao, director of the lunar and deep space exploration division of the Chinese Academy of Sciences.

Scientists have found evidence indicating a heavy asteroid bombardment event in the solar system around 3.9 billion years ago. And the SPA Basin might be an impact from that period. The exploration might offer clues as to why the bombardment occurred, said Zou.