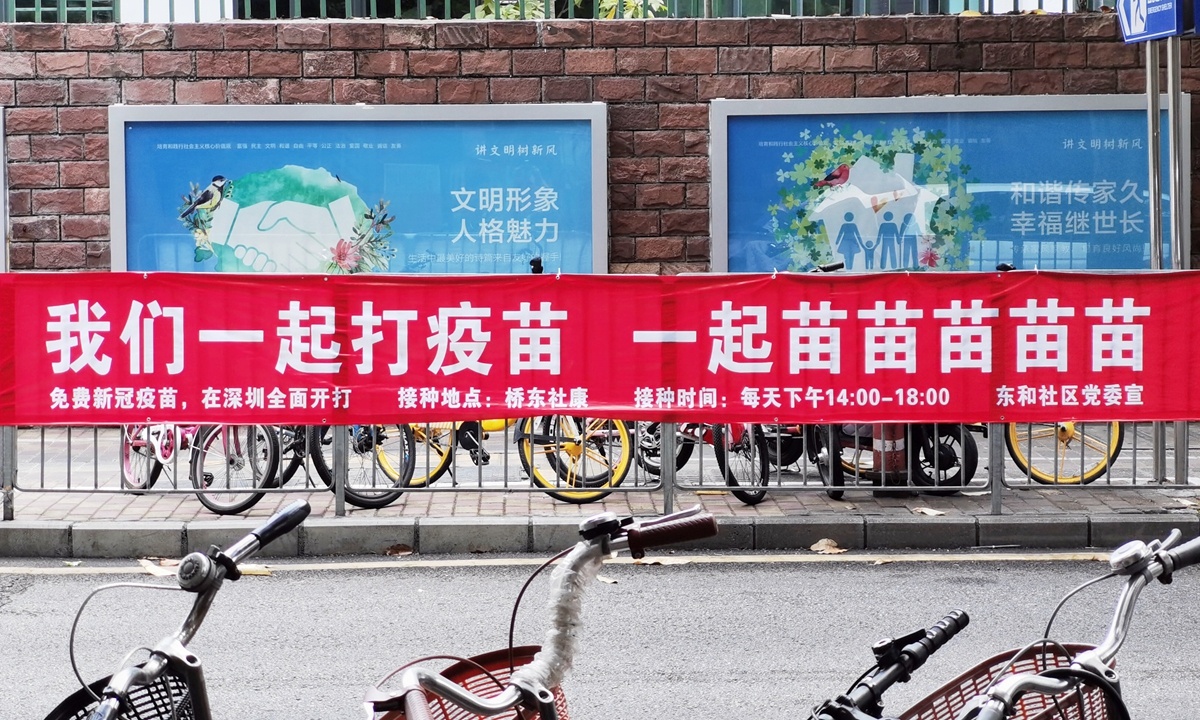 A slogan adapted from the lyrics of a pop song is presented in a community in Yantian district, Shenzhen, South China's Guangdong Province, on Tuesday. (Photo: VCG)

China is running the world's largest nationwide campaign to encourage COVID-19 inoculation via creative, considerate, and non-coercive measures to persuade people to get vaccinated. Choices made by the public will be crucial in achieving the herd immunity goal of immunizing 40 percent of the population by June, which experts said is likely to be achieved through an accelerated rollout.

Catchy and amusing slogans - adapted from the lyrics of pop music popular with young people or created based on internet buzzwords - have circulated in recent days, and these innovative campaign strategies have attracted a lot of youngsters.

Satff of the community that promoted the slogans, a community in the Yantian district, Shenzhen, South China's Guangdong Province, told reporters that they chose the slogans because they're catchy and easy to remember and spread.

Some Chinese netizens praised such creative slogans, compared to the usual rigid ones.

The country has launched a variety of public engagement and communication tools at the national, provincial and village levels to raise awareness, address hesitancy about COVID-19 vaccines, and build public trust.

A small pack of eggs, a family retail coupon, or other small items have become common post-vaccination thank-you gifts in some residence communities. Some inoculation teams in places like Shanghai offer door-to-door services, stepping into skyscrapers to provide on-the-spot shots to busy white-collar workers.

Buses in many places show videos about vaccinations.

Some villages reached by the Global Times have sent teams of volunteers and community workers to individual households to respond to public concerns over the innovative vaccines. Village officials hung banners at gates and used loudspeakers to motivate inoculation.

A Center for Disease Control and Prevention (CDC) staffer in Xuanhua town, Northwest China's Gansu Province, told the Global Times that his team is accelerating the rollout campaign to people aged between 18 and 59. Eligible individuals are encouraged to register, but it is definitely not mandatory.

"Most people who are eligible for vaccination are very understanding and cooperative with the policy to achieve herd immunity. But some still remain skeptical of such a new vaccine and worry about potential allergic reactions," the staffer, surnamed Liu, told the Global Times on Tuesday.

"We then set up weekly consultation session in some villages to provide education about protecting the most vulnerable people, and we provide clear and transparent information for those who are hesitant and reluctant," Liu said.

"We take patients' blood pressure and temperature, and explain the matters needing attention thoroughly, before the jabs. We have ambulances at the vaccination sites in case of any acute adverse reactions. People's concerns gradually eased, and the acceptance rate increased, judging by the number of registered patients," said Liu.

Campaigners design different communication approaches for multicultural and multiethnic communities, ensuring that the messages are properly disseminated through the best communication channels.

To better help villagers understand the vaccines, doctors and nurses who know both Putonghua and local ethnic languages had been dispatched to vaccination stations temporarily set up in villages and towns in the Aksu region of Northwest China's Uygur Autonomous Region, in the past few days. The region plans to vaccinate about half of its population.

Bilingual posters, radios and WeChat posts have been made to promote the significance of vaccination.

"It turns out many local residents are willing to get the shots," Li Yanli, head nurse at the Aksu No.1 People's Hospital, told the Global Times on Tuesday.

Close to the goal

China had delivered delivered to whom ? 110.9 million doses of vaccines to residents as of Monday. The National Health Commission has previously said that China's daily vaccination capacity can reach 10 million doses.

Global Times reporters noted that daily total doses across the country over the past five days ranged from 3.4 million to 6 million doses. But experts predict the daily total can reach 10 million doses soon as the campaign scales up.

But Zhou Zijun, a public health expert at Peking University, told the Global Times that it is difficult to predict whether the target will be achieved, as it depends on the speed of vaccination and the production of vaccines in different regions.

Zhou said the current vaccination campaign should first focus on cities with a high population density, while it's less urgent to get everyone vaccinated in remote areas with a low risk of transmission and low population mobility.