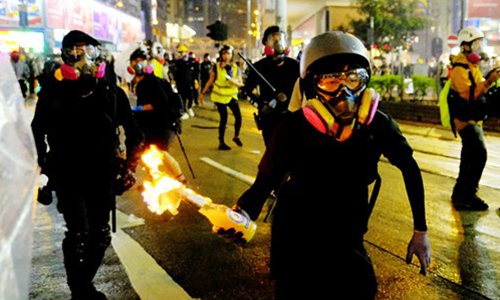 The number of crime offences in Hong Kong including break-ins, robberies and arson attacks has continued increasing amid a continuation of anti-government protests for half a year, the Hong Kong police said on Monday.

Multiple crimes involving suspected robberies with firearms have occurred this month, including the attacks on Sunday and Monday, Kwok Ka-chuen, chief superintendent of the Police Public Relations Branch, told a press conference on Monday.

Less than two hours before the attack, a local businessman was also mugged in Yau Ma Tei to the amount of HK$200,000 that he had just withdrawn from a bank in the district.

In another case, a male suspect fired a live round at police attempting to arrest him on Friday night in Tai Po. The suspect, a teenager, was detained and the police have seized a pistol-like weapon. He was reportedly involved in an earlier case in which bombs and firearms were seized related to protests in the city. The suspect was indicted at Fanling Magistrates' Courts on Monday.

At least three cases have occurred this month in which suspects were equipped with real guns and bullets, and home-made bombs. According to the investigation, certain individuals planned to use lethal force in crowded places on Tuesday, Christmas Eve, including shooting from a height using long range firearms and detonating bombs in crowds, said Kwok, noting that the victims would most likely be random HK residents, which would lead to disastrous consequences.

The number of robbery cases has gone up 28 percent this year compared with last year, meaning that robberies occur every other day in 2019, compared with once every three days in 2018, Li Kwai-wah, senior superintendent of the Organized Crime and Triad Bureau, revealed.

Street robberies went up 44 percent so far this year, burglaries from vehicles have risen by 39.3 percent, and car thefts have jumped 44 percent, according to Li, stressing the rising crime rates are related to social disorder. Outlaws, aware of the public's indulgence, would naturally be involved in such crimes, he said.

The police can't rule out the possibility that some people have been fishing in troubled waters after taking note of how busy police officers have been, Kwok said, noting that local residents' awareness of abiding by the law is most worrisome as some might intentionally provide assistance to criminals and prevent police officers from enacting the law.

In addition, false information has continued to spread, provoking the residents into arguments with local police and creating hatred, he went on to say.