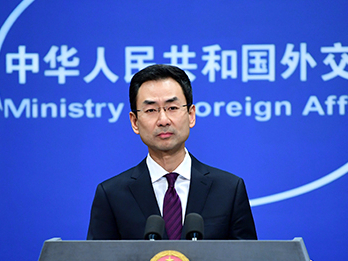 Geng Shuang made the remarks when asked to comment on the UN Security Council voting on the draft resolution on the mandate renewal of cross-border humanitarian relief mechanism in Syria proposed by countries including Germany. China and Russia voted against the draft resolution.
He said China's Permanent Representative to the United Nations Zhang Jun has elaborated on China's position in his statement at the UN Security Council.
Geng said China attaches great importance to the humanitarian situation in Syria and has actively participated in the discussions on the relevant draft resolution at the UN Security Council.
"We have done a lot of work to help all parties bridge differences," he said.
Cross-border humanitarian relief is a special relief method adopted under specific circumstances, which should be based on full respect for Syria's sovereignty, independence, unity and territorial integrity as well as the Syrian government's views, and evaluated and adjusted in light of the developments on the ground, he said.
"Regrettably, the final texts are not in line with the above spirit, bringing serious difficulties for China," Geng said.
He said countries that proposed the draft resolution forcefully pushed a vote on them despite major divergences. They do not contribute to the solidarity and authority of the UN Security Council, nor do they help to improve the humanitarian situation in Syria.
"Therefore, China voted against the draft resolution," Geng said.
China stands ready to, along with all parties, continue to work constructively toward the political settlement of the Syrian issue, which is the fundamental means of improving the humanitarian situation in Syria, he said.
China firmly rejects the groundless accusations on China by some countries, he added.
"China cast its vote based on the merits of the matter itself and the fundamental interests of the Syrian people," said Geng, urging certain countries to earnestly reflect on their words and deeds since their wrong actions inflicted sufferings on the Syrian people.