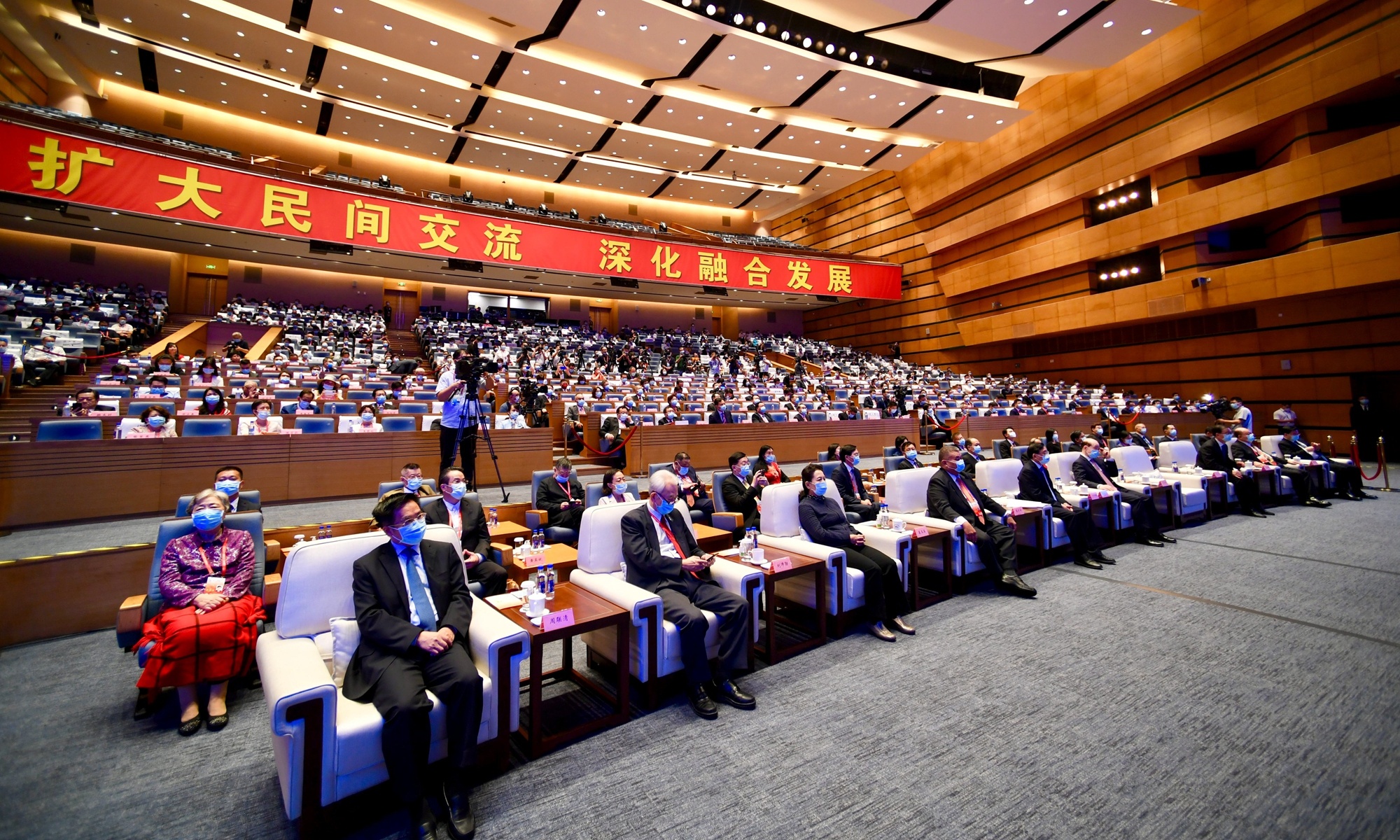 The ongoing Straits Forum held in the Chinese mainland for cross-Straits people-to-people exchanges showed that the mainland is handling the complicated situation with "two hands" - supporting exchanges and cooperation to serve the concrete benefits of Taiwan compatriots, and increasing military pressure to deter Taiwan separatism and the Trump administration which is increasingly throwing its weight on the Taiwan question, experts said on Sunday.

"Taiwan secession is a dead end," China's top political advisor Wang Yang said via video at the Straits Forum held by the Taiwan Affairs Office of the State Council in Xiamen, Fujian Province on Sunday, the Xinhua News Agency reported. Wang, a member of the Standing Committee of the Political Bureau of the Communist Party of China Central Committee and chairman of the National Committee of the Chinese People's Political Consultative Conference, added that asking for support from foreign forces to make dangerous moves will only bring unbearable risk to Taiwan.

From Friday to Saturday, according to Taiwan media, the People's Liberation Army (PLA) has sent dozens of military aircraft including bombers and fighter jets to cross the so-called "middle line" of the Taiwan Straits, and on Sunday, military aircraft from the PLA, Taiwan military and the US military all appeared in the morning in the southwest "airspace" of the island.

Wang, who is also the chairman of the National Committee of the Chinese People's Political Consultative Conference, remarked that since the beginning of this year, the global economic situation is becoming more severe, but trade between the two sides of the Taiwan Straits is still increasing sharply, and this has proved that the mainland is always the most reliable and solid backer for the island.

According to data released by the Ministry of Commerce on September 11, from January to August this year, trade between the mainland and island of Taiwan reached more than $158.9 billion, a year-on-year growth of 10 percent.

"Some people in the island are trying to limit and decrease cross-Straits exchanges and cooperation, and vainly attempt to decouple from the mainland's economy and cut-off cultural connection. These will bring no gains but all losses to Taiwan," Wang stressed.

Zheng Bo-yu, manager of the Vstartup Station of Taiwan and a Taiwan youth representative who attended multiple parallel sessions of the ongoing forum, told the Global Times that the forum is a platform for people-to-people exchanges, for the Taiwan youth who want to launch startups or study in the mainland, rather than a political forum, so the rising tensions around Taiwan Straits at present did not affect the atmosphere of the forum too much.

"But unfortunately, due to the interruption made by the Democratic Progressive Party (DPP) authority, only some people could fly to Xiamen, and an online parallel session on cultural issues which was scheduled to be held in Taipei had to be canceled," he said.

"We [Taiwan participants] are joking with our mainland partners at the forum, saying that if you can see anyone from Taiwan participating in the forum this time, they are all coming with true love," Zheng said. He said that some of them might be targets of the DPP authority after they return to Taiwan as the separatist authority does not want to see the friendly exchanges aiming at promoting mutual understanding with the mainland.

Lee Sheng-feng, vice president of the New Party of Taiwan, a Taiwan political party with a pro-reunification stance, told media at the forum on Sunday that "the whole society of Taiwan has a consensus - peace. The exchange is a foundation for the two sides to reach that peace, and whoever is interrupting the exchanges is the one who is undermining the peace, and is a sinner to history and the people on the two sides of the Straits."

Despite obstacles set by DPP authorities, some 2,000 participants from the island attended the forum, according to Xinhua on Saturday.

Roughly at the same time, US Undersecretary of State Keith Krach visited the island of Taiwan to increase interactions with the separatist DPP authority, but Taiwan participants in the Straits Forum said that this kind of interaction is all about politics and only benefits the Trump administration and the separatist authority. It has nothing to do with Taiwan people's interests.

Originally, the DPP authority said Krach would hold an economic dialogue with DPP authority but it turned out that this was only a wishful thinking, and the Trump administration wants to show its support for Taiwan separatism to provoke the mainland. It wants to force the island to buy more US problematic products and weapons and the DPP can still please the separatists in the island to win more support.

"It is hilarious and ridiculous that the DPP is making Taiwan residents happy to be a cash-machine for the US, while gaining no promise of security and economic interests from Washington," Zheng said. "At the same time, they can also make many Taiwan people blindly hate the mainland, which is the one providing significant economic opportunities and benefits to the island."

Wu Cherng-dean, president of the New Party, who also attended the forum, told the Global Times on Sunday that the current tensions are getting more serious than the 1996 Taiwan Straits Crisis.

"At that time, the interference of the US was more symbolic, but now it seems like the US could even make significant policy shift on the Taiwan question," Wu said." This could mean an abandonment of their previous stance and the one-China principle to openly support separatism, Wu noted.

The recent massive military drills conducted by the PLA show that the Chinese mainland is capable of seizing air superiority and command of the sea over the island of Taiwan and in the Straits if the mainland has to reunify the island by force due to the uncontrolled extreme secessionism of the island, said military experts.

Some politicians within the island are trying to blame the mainland for the rising tensions, and these politicians are not only from the ruling DPP, but also from the opposition party Kuomintang (KMT), which canceled its delegation to the forum in Xiamen. On Saturday, Chiang Chi-chen, president of the KMT posted on Facebook that the actions of the PLA will make public opinion in the island less favorable to the mainland.

However, this kind of opinion is truly unfair and confuses right and wrong, said Chinese mainland analysts, because these actions are actually triggered by increasing collusion between Washington and the island, which are intended to provoke the mainland and encourage separatism.

"When the mainland said it will not forego the use of force to reunify the island, it is speaking to the separatists rather than Taiwan people, and now the recent warnings and deterrence released by mainland officials and the military is to let Taiwan people understand it is the DPP and the US who are endangering them, rather than the mainland," said a Beijing-based expert on Taiwan affairs on Sunday.

The expert told the Global Times that "unfortunately, although the mainland has made a lot of effort to provide convenience and support to serve the benefits of the people, due to the one-sided anti-mainland propaganda made by the DPP, many Taiwan residents' view on the mainland is getting worse rather than improving. This is making many mainland people lose faith on the prospect of peaceful reunification and they increasingly support a military solution."

"As Taiwan residents, we worry that the DPP's propaganda can use the tensions to legitimize arms sales from the US, which costs huge amounts of money and further endangers the island," Zheng said.