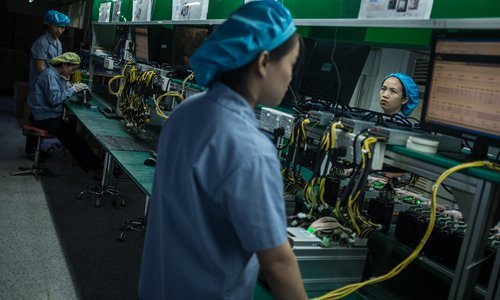 Several miners in China reached by the Global Times said they are considering moving mining machines to the US state of Texas or to Kazakhstan, due to favorable local cryptocurrency policies and cheap electricity there.

Some miners were forced to go overseas, moving to hotspots such as Texas, Maryland and northern New York in the US, and Kazakhstan, a Hangzhou-based miner who asked to be anonymous told the Global Times on Wednesday.

However, the electricity supply in Kazakhstan can only satisfy a small number of miners from China, because the domestic mining industry has been around for two years, the miner said, suggesting miners in Kazakhstan cooperate with those from China.

Texas is another popular option for miners. An industry insider, who spoke on condition of anonymity, told the Global Times on Wednesday that "Texas is very popular for Chinese Bitcoin miners as the US government has a clear stance and legal framework for cryptocurrency. Electricity rates in the state are relatively cheap."

But he noted that some hurdles remain, such as shipping mining machines overseas, and he suggested that Chinese miners could form alliances to jointly bargain with overseas partners to overcome difficulties.

According to the industry insider, Bitcoin mining is no longer a lucrative business due to plunging market prices, which has prompted some industry players to idle their machines.

"Some have adopted a wait-and see-attitude, and are awaiting a proper price to get their machines roaring again," he noted.

China's intensified crackdown on cryptocurrencies has covered mine shutdowns, trading and payment.

Bitcoin has tumbled below $30,000 for the first time in more than five months.

As a consequence, secondhand cryptocurrency mining GPUs have come into the Chinese market.

This secondhand market has existed for some time, but is not standardized, according to the Hangzhou-based miner.

Considering the many secondhand machines flowing into the market, Bitmain, known for producing the largest amount of mining hardware, told Chainnews on Wednesday that it has decided to reduce supplies of spot mining machines in order to reduce the losses and shipment pressure for customers.