The visit to China by Cuban President Miguel Diaz-Canel will further deepen the friendship between China and Cuba and help open up both markets, Chinese analysts noted on Tuesday. 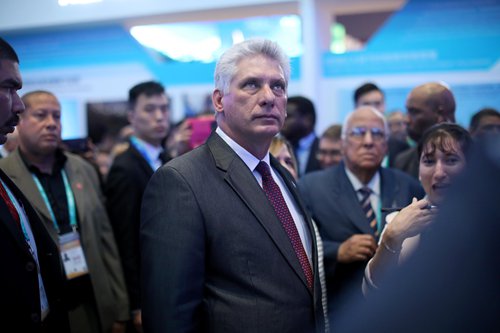 The visit came after Diaz-Canel took office in April, which Chinese analysts said demonstrates the firm determination of the Cuban leader to inherit and deepen the bilateral relationship.

Diaz-Canel was filmed by a Global Times reporter visiting the China International Import Expo in Shanghai on Tuesday.

The Cuban president was introduced to a model of the China Railway Express and inspected models of the Hong Kong-Zhuhai-Macao Bridge and its 6.7 -kilometer undersea tunnel at the expo's China Pavilion on Tuesday.

He then visited the Cuba Pavilion.

Like his predecessors, Diaz-Canel will keep maintaining the well-established China-Cuba relationship and seek further economic opportunities, especially in terms of Chinese investment, Han Han, secretary general of the Cuba Research Center at the Chinese Academy of Social Sciences' Institute of Latin American Studies, told the Global Times on Tuesday. 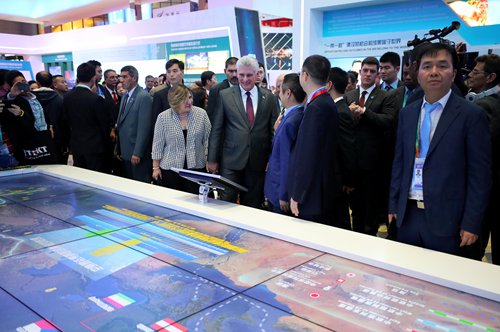 Cuban President Miguel Diaz-Canel (center) is introduced to a model of the China Railway Express at the China International Import Expo in Shanghai on Tuesday.

Diaz-Canel is a leader that supports Cuban reform and opening, which will optimize the nationwide investment environment and attract more Chinese investors to private business, Han noted.

The expo in Shanghai will provide opportunities for Cuban companies to boost rum, cigar and fruit exports to the Chinese market, Dong said.

Chinese visitors showed interest in the long history of high-quality Cuban cigars at the expo, the Global Times found.

Cuba is the only socialist country in the Western hemisphere and the first Latin American and Caribbean country to establish diplomatic relations with China.

Since the Latin American country has tense relations with the US, its relationship with China is extremely important and won't change in the short term, Chinese analysts noted.

The Cuban president is expected to finish his visit on Thursday.