CHINA Cui: Now is time to cooperate, not decouple

Cui: Now is time to cooperate, not decouple 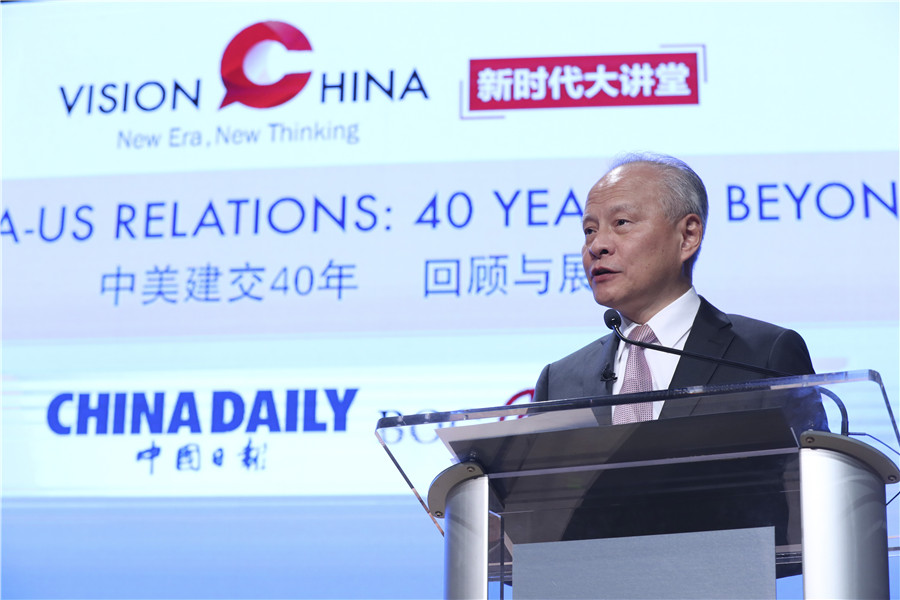 As the China-US relationship sits at another crossroads, the world's two largest economies should come together by expanding cooperation rather than "decoupling" from each other, Chinese Ambassador to the US Cui Tiankai said Tuesday.

"We have learned from the past four decades that cooperation is the only right option for us," China's top envoy to the US said as he delivered the keynote address at a Vision China event in New York. "It is something we should always uphold."

The forum, "China-US Relations: 40 Years & Beyond", hosted by China Daily and Bank of China, featured commentary by experts intricately involved in Sino-American relations.

"Decoupling our two countries in trade and industrial development goes against globalization and the tide of history. And considering China's advantages in cost, market and supply chain and its growing edge in innovation, to decouple from China is to decouple from opportunities," Cui said.

Cui's remarks came amid trade differences between the two countries that date to early 2018. Another round of talks between the countries' top trade negotiators is scheduled for early October.

"The trade war the US launched and repeatedly escalated was based on a wrong rationale in the very beginning, and its negative impact has now hit both countries and spilt over to the whole world," said Cui.

Scientific, technological and people-to-people exchanges between the two countries also are hard to decouple, Cui added.

China and the US differ on some issues, said Cui; however, instead of justifying confrontation or conflict, the disagreements should be seen as opportunities and potential for complementarity and cooperation.

"It is extremely dangerous and irresponsible to base America's policy on alarmism and label China as a strategic rival and even adversary," said Cui.

He refuted the rhetoric that a rising China will "displace the US to be the world's new hegemon", and said China aspires to pursue happiness for its people, rejuvenation for the nation and harmony for the world.

Despite the economic advancement achieved by China in past decades, the country still faces tough challenges, including eliminating poverty, preventing and resolving systemic risks, and preventing and controlling pollution, noted Cui.

"China develops itself to deliver a better life to its people, not to scramble for global dominance," Cui said.

Cui pointed out that China's development has served other countries, including the US, and any decoupling of China and the US is hardly possible, given the inseparable links between the two.

In the past three years, China has remained the US' top trading partner. Daily trade between the two countries is worth more than $1.5 billion, according to the Chinese embassy in Washington.

More than 14,000 people fly between the two countries every day for work, study and leisure. There are now more than 270 pairs of sister-states and sister-cities, and more than 360,000 Chinese students in the US, according to the embassy.

The bilateral relationship has major bearing on world stability and prosperity, said Cui, and the two nations could cooperate to deal with global issues such as nuclear proliferation, terrorism, climate change, and natural disasters and challenges.

While the US will remain "the world's strongest country a long time to come", whether it can take an open and confident approach to China's development "will affect its future, and will determine the direction of China-US relations and very probably the future of the world", Cui said.