By Cui Can | China.org.cn 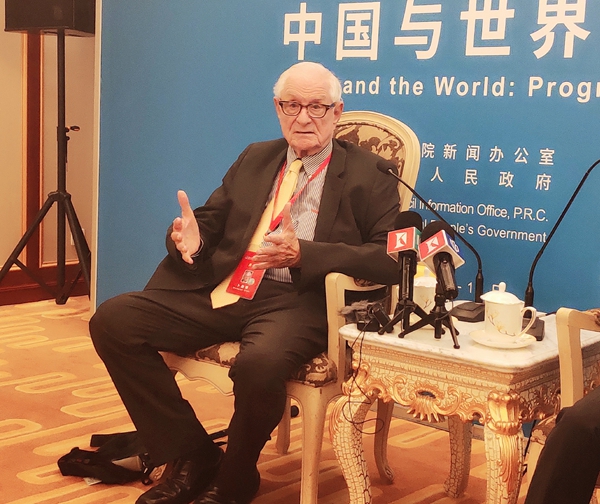 Nicholas Platt, president emeritus of the Asia Society in the United States, takes an interview during the Eighth World Forum on China Studies held in Shanghai on Sept. 10, 2019. (Photos by Zhou Lin/China Today)

At a time when growing tension and disagreement mark many aspects of the China-U.S. relationship, cooperation among long-term partners represents welcome continuity. Nicholas Platt, president emeritus of the Asia Society in the United States, stressed that cultural exchange is currently the most promising sector of China-U.S. relations.

Speaking in an interview during the Eighth World Forum on China Studies held Tuesday in Shanghai, Platt believes that the China-U.S. friendship can survive all these current pressures and that conflict between China and the United States is not inevitable.

"We (China and the United States) have spent decades together, both competing and cooperating, while dealing with serious crises along the way," he said. "We have no choice but to press ahead, with the focus on practical solutions rather than ideological pronouncements."

Platt, who first traveled to China with President Nixon in 1972 and worked with former U.S. Secretary of State Henry Kissinger to set up the U.S. Liaison Office in Beijing back in 1973, has a long view of the arc of China-U.S. relations. He was also one of the four scholars honored for their outstanding contributions to China studies during this year’s forum.

Over the years, Platt has witnessed that the people-to-people exchanges between the two sides, once tiny and barely existent, have become so huge that they have assumed major strategic significance. Trade, investment, travel, sports, culture, science and education have become regular agenda items in high-level strategic consultations between the two governments.

Platt recalled the pioneer visit of the Philadelphia Orchestra to China 46 years ago, which signified an important milestone in both the development of Western classical music in China, and the relationship between China and the United States. It changed Chinese perceptions of Western music and introduced musicians in the United States to Chinese traditional virtuoso performers. As a result, the Philadelphia Orchestra became a household name in China.

The former U.S. ambassador facilitated the orchestra's 1973 tour and still serves as its senior adviser.

Earlier this year, Platt accompanied the Philadelphia Orchestra on its 12th China tour, which he was worried would be poisoned by the current tensions.

He found, however, that culture had escaped the controversies that were damaging other areas of China-U.S. relations. "Music actually purifies the soul," he said.

The American scholar compared the China-U.S. relationship to an iceberg, with the jagged edges of "strategic mistrust" clearly visible above the surface. But below the waterline is a big mass of private relationships maintained by "tactical trust" that provides stability.

Looking towards the future of China-U.S. relations, Platt expressed confidence. "We have been competing and cooperating for decades and will continue to do so in the future," he said. "Interdependence is complicated and not very comfortable, breeding new problems every step of the way. But it is vibrantly alive, a force in its own right." 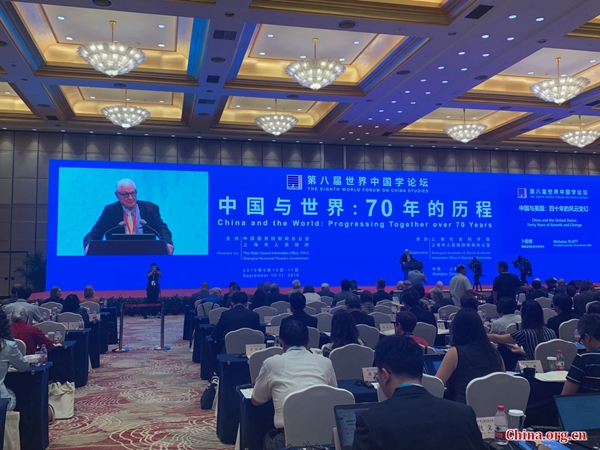 Nicholas Platt, president emeritus of the Asia Society in the United States, delivers a speech during the opening ceremony of the Eighth World Forum on China Studies held in Shanghai on Sept. 10, 2019.