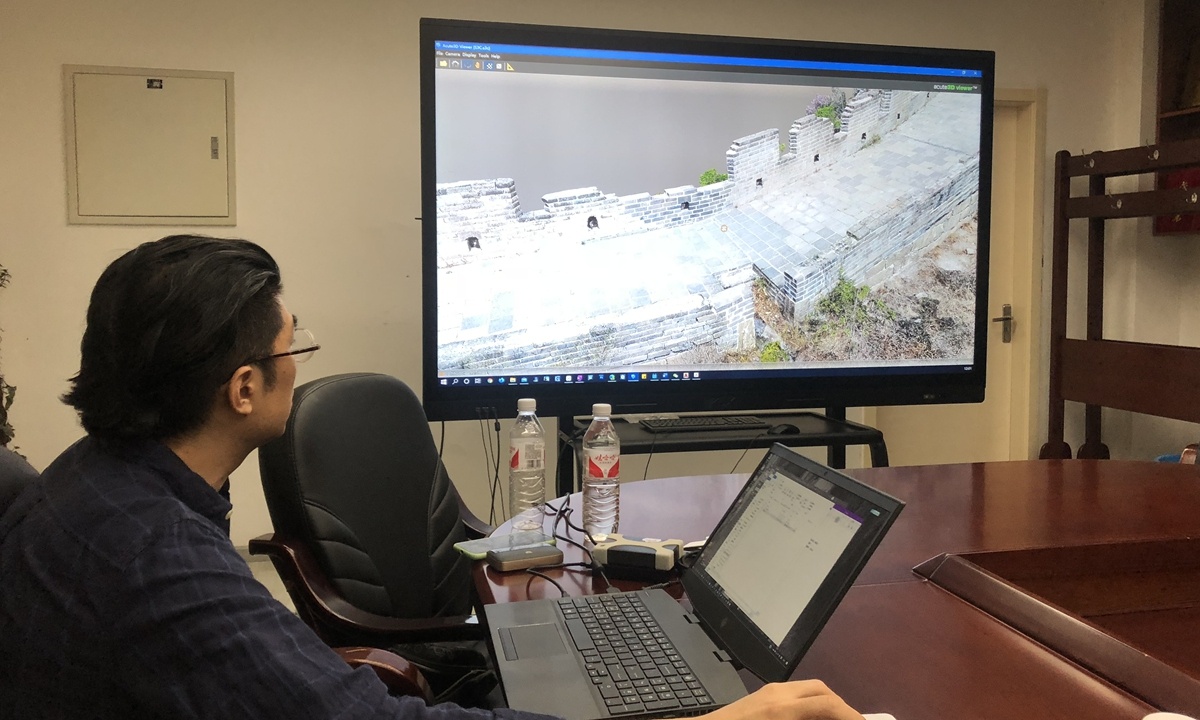 Zhai Fei, a technician of Beijing Institute of Conservation and Design of Ancient Architecture, shows a high-precision three-dimensional model of the Great Wall. (Photo: Global Times)

High-techs such as drones and satellite remote sensing tools are used to document and survey the Badaling Great Wall and create a “digital Great Wall,” helping protection efforts go from “qualitative” to “quantitative.”

“Using this technology to collect Great Wall data, which provides more accurate data support for later repair and protection, is an important step in building the “‘digital Great Wall.’” It also serves as a model reference for the protection of the Great Wall in other provinces of China,” Yu Haikuan, director of the Yanqing Institute of Cultural Relics, told the Global Times. 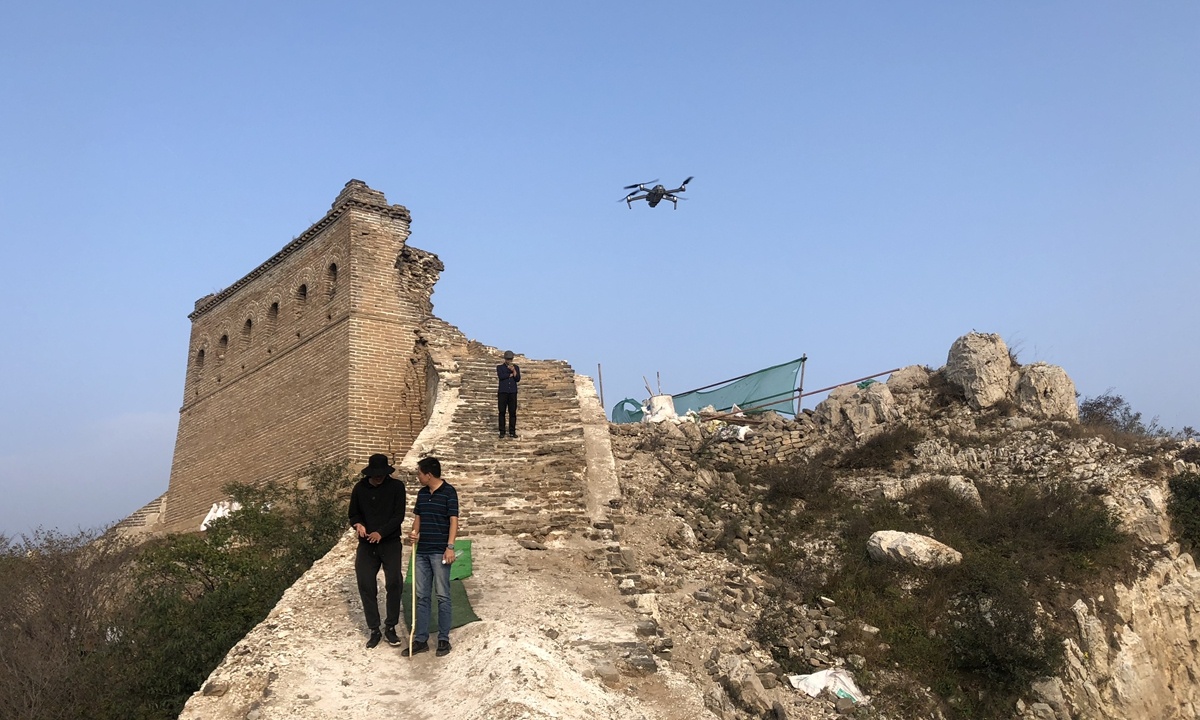 A drone cruises over the No.90 tower of Badaling Great Wall at Yanqing district, Beijing to observe its restoration and reinforcement condition on Sunday afternoon. (Photo: Global Times)

It is an innovation in the protection of the Great Wall for the first time to make a comprehensive survey and mapping of the Great Wall and the environment along the Great Wall by using drones equipped with various kinds of photographic equipment through the nap-of-the-object photogrammetric technology.

The Great Wall protection and monitoring area is 1,000 square kilometers, accounting for 60 percent of the area of Yanqing, which is too large to monitor illegal quarrying, sand-borrow and illegal construction by humans, Yu said.

The use of fixed-wing high-altitude drones can monitor illegal construction though aerial survey and identify illegal activities with a side length of about 5 meters. Twice a year, the aerial survey can identify the illegal buildings through the comparison of aerial pictures, and provide accurate targets for manual verification, Zhai Fei, a technician of Beijing Institute of Conservation and Design of Ancient Architecture who is helping build the digital Great Wall, told the Global Times.

For the brick-and-stone Great Wall, multi-rotor drones equipped with airborne laser radar are adopted to scan the Great Wall twice a year to form a set of 3D laser dot array data. Through the comparison of data, about 20 centimeters of morphological changes are observable and a possible collapse can be found in advance.

All kinds of data collected by drones and laser scanner can be processed to form a 3D model of the Great Wall for browsing, measurement and statistics and high-precision photos around the wall. By zooming in, the texture of the Great Wall bricks can even be seen clearly.

From February of 2007 to December 2009, the National Cultural Heritage Administration and National Surveying and Mapping Administration obtained the length data of Ming Great Wall for the first time after nearly two years’ scientific investigation and measurement, CCTV reported.

Zhai told the Global Times that it took several hundred surveyors to map the Great Wall on a 1:10,000 topographic map ten years ago with infrared range finder and GPS locator.

Using current mapping technology by drones, if each district is equipped with two drones mapping teams, it is estimated the same work can be completed within half a year. A 3D Great Wall data model, with a resolution of 2-4 cm, from which a complete set of coordinates can be formed—where all 3D dimensions can be measured and continuous surface texture can be found without errors—will be created simultaneously, Zhai noted.

The data collection and model establishment provide a solid and precise data support for further protection and restoration of the Great Wall.

“The south side of No.90 tower of Badaling is a cliff. We can't fully observe the collapse of the tower with the naked eye before the rescue and reinforcement. Drones help us have a comprehensive understanding of the overall situation before construction, and better reinforce the tower under the premise of protecting the original appearance,” Sun Junfeng, a Great Wall restoration worker, told the Global Times.

The National Cultural Heritage Administration has launched a pilot project in 15 provinces, autonomous regions and municipalities to protect the Great Wall by using high-tech technologies such as drones and satellite imagery, the China News Service reported.