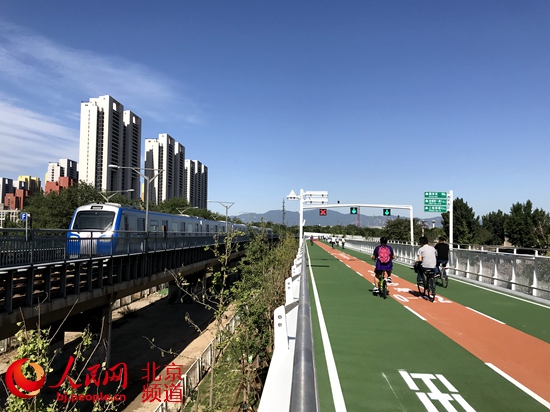 Cycling is an important part of the urban transportation system, and is an ideal way of making short- and mid-range trips, said Gai Chunying, deputy director of the transportation planning department under the Beijing Municipal Institute of City Planning and Design.

She said cycling enjoys high investment efficiency and is also able to boost related industries. In addition, it also activates the public space of cities and adds vitality to urban culture.

A “bicycle highway” stretching through Beijing’s Huilongguan, one of the capital's most populous residential zones in Changping district, is now making cycling much more convenient for local residents.

On the overpass, cyclists don’t have to keep clear of speeding cars during rush hour. Instead, they can ride freely on the open and wide bicycle path. The bicycle highway is free from the crowds you find in a subway and the congestion of ground traffic, and cyclists can still feel the joy of biking even during the busiest hours for urban traffic.

“I just love riding to work and home on the path as I feel there is absolutely no congestion. It’s more like touring,” said a woman nicknamed Xiaowen who lives nearby.

“It saves me a lot of time in commuting,” said a man surnamed Li from a nearby neighborhood, adding that the scenery along the route is great and the road is safe.

Compared with traditional bike lanes, the overpass is safer, and cyclists can also move faster along the path as it does not have traffic lights.

Gai noted that Huilongguan’s bicycle path is very helpful in exploring ways to develop biking transportation, and will guide similar planning and construction in the future.

Apart from benefiting nearby residents, the bike path has also become a “must-see” attraction, gaining huge popularity among cycling clubs, citizens and tourists visiting Beijing. By the end of 2019, the path had been visited by over 1 million people. Even COVID-19 was unable to put the brakes on people’s enthusiasm – from March 1 to 19, it was used by an average of 2,371 people each day.

Beijing is not the only city in China exploring low-carbon means of transportation. Xiamen, southeast China’s Fujian province, has also constructed an overpass exclusively for bicycles. Officially put into service on Jan. 26, 2017, the 7.6-kilometer path was the first bike-only road in China and the world’s longest.