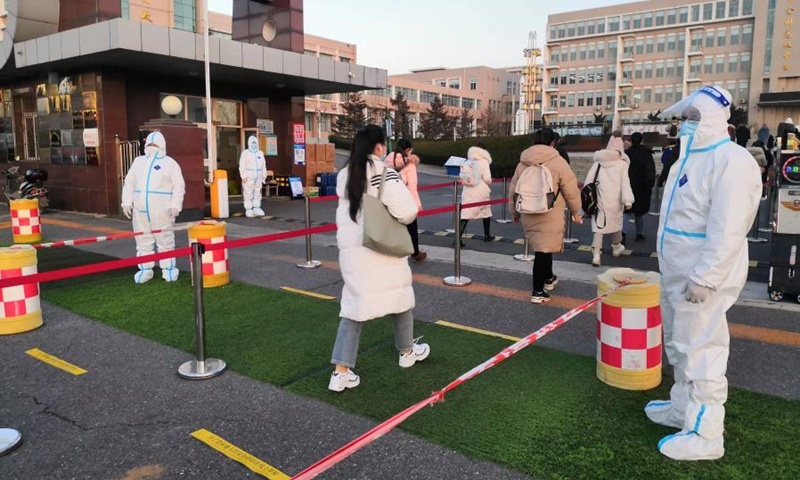 Examinees walk to Jinzhou senior high school in Dalian, northeast China's Liaoning Province, Dec. 26, 2020. A total of 304 examinees who have been kept in the quarantine area with proper epidemic prevention measures managed to take the postgraduate admission exam in designated school in Jinpu New District of Dalian on Saturday. (Photo: Xinhua)

Despite the recent spike in COVID-19 cases and "fake negatives" looming over the city of Dalian in Northeast China's Liaoning Province, several government officials were still found to be neglecting their duties and even breaking epidemic prevention and control regulations. On Tuesday, two cases reportedly saw five officials punished for organizing private gatherings while in quarantine and disobeying anti-virus rules.

An Jun, head of the local justice bureau at Jinpu New District, has been removed from his post for holding a private gathering attended by Xing Wantao, another official in the bureau, who had earlier been told to undergo centralized isolation, the local disciplinary office announced on Tuesday. Three others involved in the case also received warnings.

On December 23, Xing received a notice from his residential community demanding him to undergo centralized isolation, as he was found to have been to a shopping mall where COVID-19 cases were reported. However, when he reported the matter to An, he was not only allowed to self-quarantine at his office, but also invited to have drinks with An that evening.

During their gathering, Xing received another notice from the community, which requires him to undergo centralized isolation, but that did not stop them from partying until later that night.

Three days later, Xing was eventually sent to a designated location for quarantine.

In another case, Zhou Zhongyao, the head of the local public complaints and proposals bureau at Jinpu New District, disobeyed epidemic prevention and control rules and posted inappropriate remarks on social media.

Zhou has been suspended from office and put under inspection, according to the Dalian disciplinary office.

Zhou joined the local anti-virus prevention efforts as a volunteer at a quarantine hotel on behalf of his bureau on December 20. Hotel management staff put forward a few suggestions for disinfection to correct the mistakes that some volunteers had made in their daily operations, but Zhou ignored the suggestions and even posted inappropriate remarks on their WeChat group chat.

Dalian reported a total of 80 infections as of Monday, of whom 68 patients worked or lived in Jinpu New District. The city extended its quarantine period to 14 days at a quarantine center plus seven days of home isolation, as the new round of infections showed a stronger transmission capability and longer incubation periods, local officials said on Monday.

Besides, one Dalian patient tested negative 11 times before testing positive, while in some regions, infections were still found after six rounds of mass testing.