Dark comedy set to show a different side of Chinese animation 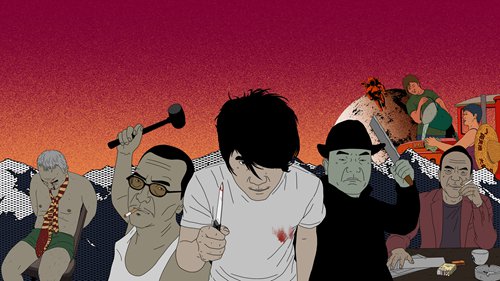 Promotional material for Have a Nice Day Photo: IC

The only Chinese-language film to compete for the Golden Bear at the 67th Berlin International Film Festival and the only animated film to do so since Miyazaki Hayao's Spirited Away, Have a Nice Day is a very different work from what people usually think of when it comes to animated film. The second feature film from artist-turned-director Liu Jian, Have a Nice Day was drawn and animated by Liu in just three years.  Set for release in the Chinese mainland on Friday and limited-release in North America on January 26, the dark comedy currently is one of the most anticipated films on Chinese media review site Douban. Considering the dark satirical nature of the film, which also contains violent scenes, many moviegoers in China worried if the film would be shown at all in its home country. "Censorship issues are handled by the producer, but my personal feeling is that the film environment [in China] is becoming more diversified," Liu told the Global Times in an exclusive interview. "There are no demands that you have to make a film this way or that way. If your film is really good, everyone will help to ensure it reaches theaters."  Liu further explained that the Chinese mainland version will not be that much different from the version screened in Berlin, as Chinese authorities only required some minor dialogue be changed. Additionally, the Chinese title was changed to Da Shijie(The Big World) from Haojile (Wonderful), to better illustrate the film's themes to Chinese audiences. "The story takes place over a single day, but it is not a very pleasant day for the main character. This made me think that the English greeting 'Have a nice day' would be a perfect sarcastic title," Liu said. Since there is no similar greeting in Chinese, Liu felt that Da Shijie made for a better title. "The film is about a group of nobodies who live on the edges of the city and yearn for a bigger world. Also, in many Chinese cities, there are amusements and entertainment venues that are called 'the big world' [which gather different classes of people]."After its world premier in Berlin, Have a Nice Day was highly praised by Western media. Describing the film as "Quentin Tarantino Meets Wong Kar-Wai," Indie Wire wrote in its Berlinale 2017 Review that "If Quentin Tarantino remade Pulp Fiction as an animated movie set in modern day China, it might look something like Have a Nice Day."Yet, there have also been a few critics of the film both at home and overseas. "If you enjoy quality animation, this film will be a horrible torture," Netizen nemesbarna posted on movie site IMDB. "Its format is fresher than the story itself. It is very much like a Guy Ritchie film and the story is like that of Chinese film Crazy Stone," wrote Chinese filmgoer Fang Qiangqiang on Douban. Responding to these critics, Liu said that he wants to present reality and the harshness of life by presenting the story in a rough way, including not using professional voice actors. He added that what he wanted to present was not necessarily a new story, but a film that explored humanity and human desires.  Having participated in various animated film festivals and activities around the world, the 1969-born filmmaker said that while Chinese animators were less adept when it came to their art styles and ability to tell a story before 2000, they are now becoming a major force on the world stage.