CHINA Dawn of the dazzling dusk

Dawn of the dazzling dusk

It's coming to midnight in Guangzhou, Guangdong province, and Liao Zhihai's restaurant is bustling. It's as though the business day has just started for the 25-year-old restaurateur. Amid much noisy cheer and excitement, Liao serves a plate of garlic-flavored crayfish and several bottles of beer to a bunch of merrymakers, probably workers socializing after a long day's late-shift work.

Liao's crayfish restaurant is open every day from 11 pm to 7 am. Office-goers, youngsters who play new-age video games at gaming parlors in the neighborhood, and those who simply crave another meal ... all flock to his restaurant for a late bite.

The term nighttime economy refers to business activities undertaken between 6 pm and 6 am in the services sector. It is a golden period for merchants seeking to expand their business.

"Nighttime eaters can never have enough. I've made a new plan for this winter. If the nighttime economy continues to upgrade, I will definitely join in and extend my business to more places," Liao said.

Not far from Liao's restaurant, a sober bar is also throbbing with life. In dim lighting, a music band belts out popular numbers while appreciative customers sip whisky on the rocks. Impressed with the scene visible through the bar's roof-to-floor thick glass-walls, some passersby walk in and settle for a late night friendly chat.

Liao said: "People there enjoy the music and the drinks, and love talking to each other in a relaxing atmosphere. Then, after downing a bottle or two of liquor or wine, they get hungry and come over here to order loads of food. My restaurant is their best option in this area."

Data from the Ministry of Commerce showed that in first-tier cities such as Beijing, Shanghai, Guangzhou and Shenzhen in Guangdong province, nighttime consumption was worth over 50 percent of daytime (6 am and 6 pm) consumption.

The nighttime consumption sector has been growing at an compound annual growth rate of 17 percent, serving as a powerful driving force for domestic demand. The sales volume of major shopping malls during the 6 pm to 10 pm time-slot accounted for over half of that for the whole day, demonstrating that nighttime is prime time for consumption.

As a result, many shopping malls are taking active measures to exploit the business opportunity. A general manager of a shopping mall in Beijing, who sought anonymity, said that to promote nighttime consumption, shopping malls build indoor and outdoor commercial streets.

He noted that currently 60 percent of China's business spending occurs nighttime. This trend is spilling over into digital channels too as e-commerce platforms operate round the clock.

Nighttime consumption took up more than 36 percent of the total. From 11 pm to 3 am, tens of millions of people shop on Tmall, Taobao's sister concern that is a platform for established domestic brands.

According to a report from the China Tourism Academy and online food delivery-to-ticketing services platform Meituan Dianping, China's night catering consumption jumped 47 percent in 2018 from a year earlier, 2 percentage points higher than the daytime growth.

A report from market consultancy iiMedia Research said that with local governments' favorable policies and amid rising market demand, China's nighttime economy will show explosive growth in the coming years to surpass 30 trillion yuan in sales revenue by 2020, and surpass 36.4 trillion yuan by 2021, growing 17.6 percent year-on-year.

This year, many cities implemented policies one after another to support the development of nighttime economy. On May 13, Beijing's Haidian district government rolled out a three-year action plan to promote overall consumption. According to the action plan, the local government will introduce nighttime economy subsidies, encourage related retail enterprises to extend evening business hours, explore several transport lines during night and promote nighttime cultural and artistic consumption in cultural salons, cinemas, theaters, and other such places.

The six municipal demonstration plots of the nighttime economy markets built in Tianjin had welcomed 130,000 customers per day on average, with a monthly total sales of 20 million yuan in August, according to the Tianjin Information Center.

Xu Hongcai, deputy director of the economic policy committee with the China Association of Policy Science, said: "To explore the consumption potential of cities, nighttime economy is a practical and efficient approach. 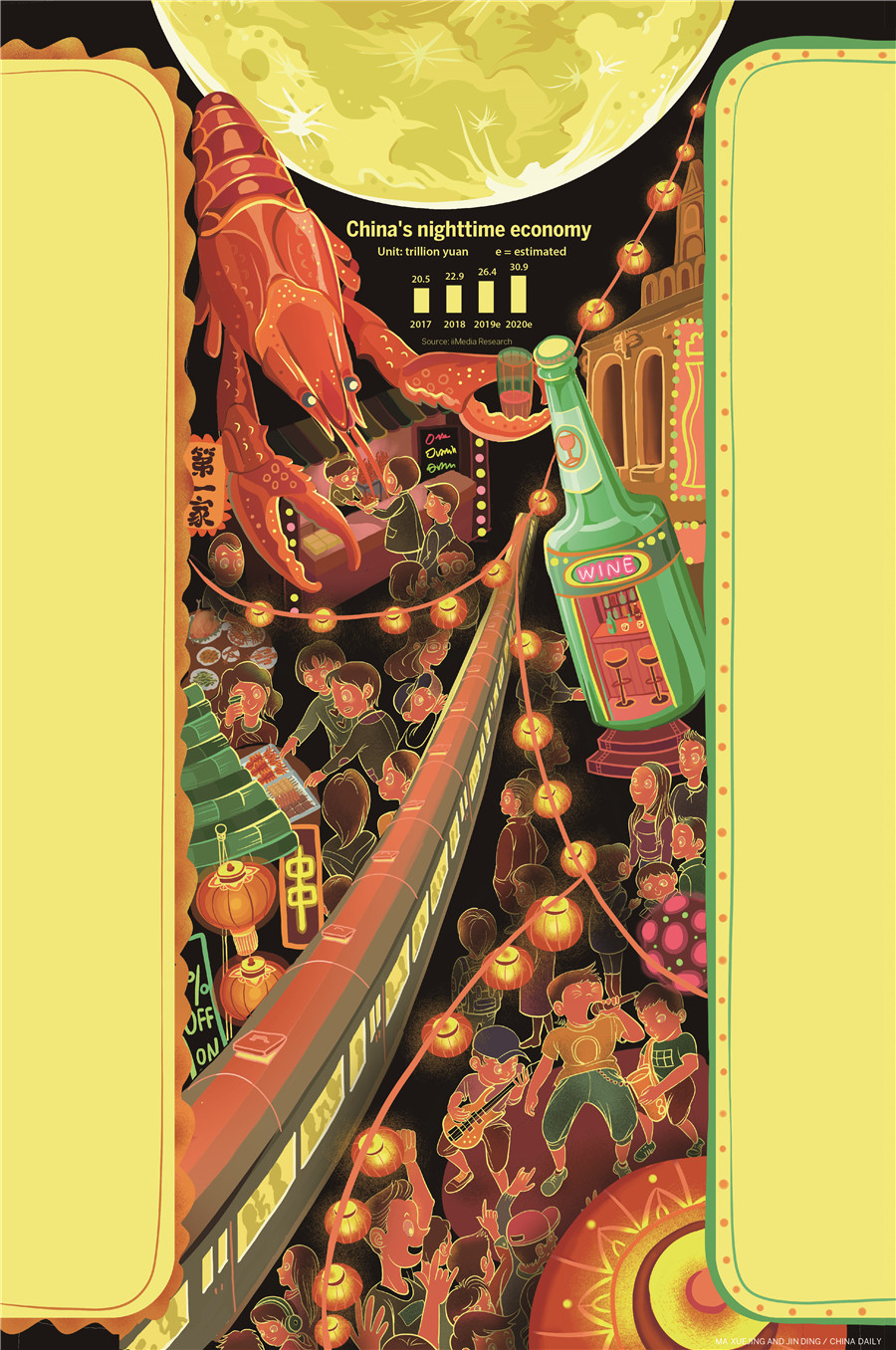 "Currently, China's gross national income per capita is nearly $10,000, which is higher than the average level of middle-income countries. At this development stage, residents' demand for high-quality nighttime consumption grows steadily."

Globally, many metropolises boast thriving nighttime consumption. Some economists use the brightness of nighttime lights to evaluate the economic vitality of a city, Xu said.

On the back of the policies formulated by local governments to boost nighttime economy, cities have reached a consensus to promote the development of the sector by enhancing infrastructure construction. Public transportation, power supply, and 5G projects will bring another round of economic growth, market insiders said.

Mao Zhonggen, director of the Western China Economic Research Center at the Southwestern University of Finance and Economics, said: "Support services are a priority for the development of the nighttime economy. There are still many obstacles that hinder the development of the sector, such as climate difference between day and night, residents' lack of spare time, predictable business practices, the homogeneity of products, as well as the inconvenience of public transportation."

These problems need to be addressed, so that nighttime economy can make a bigger contribution to the consumption sector, he said.