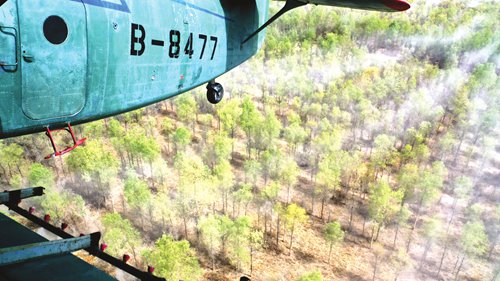 It is easy to see when spring arrives in Northwest China's Xinjiang Uyghur Autonomous Region, thanks in large part to a prolonged campaign to turn this mostly desert area into lush swathes of green."After consistent efforts over a long period, the artificial oasis area in Xinjiang has expanded to five times the size of in the 1950s. The region is much greener," said Yang Jianming, deputy director of Xinjiang's forestation office.  Becoming realityThe Taklimakan Desert and the Gurbantunggut Desert cover large areas of land on the north and south sides of Tianshan Mountain respectively, making the color of sand the region's primary hue.Pei Yu, deputy director of a non-commercial forest station in Shanshan county, Turpan, stood on the top of a sand dune on March 3, and watched the lush forest that covers more than 10,000 mu (about 6.7 million square meters) along the edge of the Kumtag Desert."We planted all the trees, vowing to make the place green. It has become a reality. The place where I'm standing is another forest that we planned to plant this year. It will also become green," Pei said. The development of Xinjiang is closely related to forestation. According to Yang Jianming, the area of the Three-North Shelter forest program in the Xinjiang region has reached more than 66 million mu, and the artificial oasis area is 62,000 square meters. The forestation area for this year is expected to increase by 2 million mu. Carrying out forestation programs in Xinjiang is no easy task, as deserts cover most of the area and it has a temperate continental climate with low rainfall throughout the year. Forestation projects in the region can only be accomplished with a great deal of perseverance. Liu Zhen, an official from Aksu Prefecture, planted his first tree in March 27 this year. More than 1 million mu of forest surround his seedling. Over the past 30 years, the leaders of Aksu have changed and the people who first planted trees here have grown old, but forestation work has never stopped. The prefecture has accomplished more than 4 million mu of forestation.

"We people who work for the forestation projects are very proud of ourselves," Yang Jianming said. He used a poem to describe the sharp contrast in the climate of the southern part of China and where they live. "Horses gallop in the west wind while apricot blossoms get wet in the spring rain… if there are no green areas, there will be no place for humans to survive. We are engaged in a great career," Yang said. According to data from the Xinjiang Daily, the total forest coverage rate of Xinjiang has risen from 1.03 percent four decades ago to 4.87 percent today.Led by scienceThe development of technology and scientific guidance have helped greatly with the forestation projects in Xinjiang. Ecological forests have been planted on the periphery of the desert and commercial forests in the inner circle, based on market demands. Poultry breeding and tourism will also be introduced to fit with local social development. Making the place greener relies not only on forestation projects, but also water resource management. When a sluice gate of a water conservancy project over the Kongque River in Koral, in Bayingolin Mongolian Autonomous Prefecture, slowly opens, clean water flows out toward a populous forest several hundred kilometers away."What is the priority in ecology? We consider water consumption for humans and nature in the same way and we do not neglect the survival of other lives to meet human needs," said Ma Ming, a director of the management department of the Tarim River region. In recent years, Xinjiang has worked on enhancing agricultural technology while improving water management. This allows more water to flow from farmland to the desert to revive plants, which also helps to fasten drifting sand.Zhumahali Hardbayi, a herdsman from the Dabancheng district in Urumqi, said that "Turpan city and our district have implemented a project of returning grazing land to grassland. With more grass, we will have more sheep, and snow leopards have also appeared in the area."This year marks the 21st year of the start of Xinjiang's natural forest protection work, with a total of 49.18 million mu of natural forest now covered. "From 1998 to 2004, Xinjiang reduced the yearly timber yield from 280,000 cubic meters to 80,000 cubic meters. In January 2005, Xinjiang took the first step nationwide to stop felling natural forest for commercial use. All the lumberjacks became forest rangers," said Xiao Zhongqi, a senior engineer from the bureau of forestry and grassland in Xinjiang. Benefiting from nature With its efforts to protect the natural forest and increase in forestation area, Xinjiang's environment has improved, which has also benefited local residents' lives. Ning Tao, manager of a Xinjiang-based ecological technology company, is planning to organize people to plant Chinese wild rye this month. He is confident of making a success of the ecological program in Duzishan village, Hutubi county in Changji Hui Autonomous Prefecture. "The desert grassland is hardly covered by plants, but we will change the situation by planting Chinese wild rye with the assistance of the Chinese Academy of Sciences," Ning said. Chinese wild rye is a high-quality forage that can resist cold weather and drought. Once planted, it can be harvested for up to 30 years. It can also help with desertification control and water conservation.

"We will try to plant 50,000 mu of Chinese wild rye within three years, making it the largest base for the pratacultural industry in Xinjiang, producing the seed, processing and selling Chinese wild rye," Ning said. The forestry and fruit industries have become the main sources of income for local farmers.Aniwar Abulaizi, a farmer from Gulubashi village of Jiashi county, Kashi Prefecture has planted prunes for four years. "I can earn more than 20,000 yuan from one mu of prune," he said.By the end of 2018, Xinjiang had more than 22 million mu of forest and fruit trees, with an annual yield of 10 million tons. Even the deserts have become a source of income. Wumer Memeti resigned from a station selling agricultural machinery in Shanshan county in 2016. He took all his money to plant saxaul in deserts. His agricultural cooperative now owns 2,700 mu of saxaul.The forestation projects in Xinjiang also help with transportation. Yelibao Sailiguai, a truck driver, said that he no longer worries about strong winds from the desert blowing his truck over. Many deserts in Xinjiang have been transformed into parks. Xinjiang now has 36 desert parks, the largest number in China."By building these desert parks, we can improve our desertification control work," Tursun Tuhuti, a director of the desertification control department of the bureau of forestry and grassland in Xinjiang, was quoted by the Xinjiang Daily as saying.