Students at CPC centenary event found renewed sense of purpose, commitment
Students who took part in the ceremony marking the centenary of the Communist Party of China on July 1 said they were inspired by the speech delivered by Xi Jinping, general secretary of the CPC Central Committee, and are committed to playing a crucial role in the great rejuvenation of the nation.

They said they are ready to devote their strength to the cause of the Party and the people, and to contribute to building a powerful China.

At the ceremony, more than 1,000 young students, representatives of the Communist Youth League of China and the Chinese Young Pioneers, conveyed their congratulations in the form of a heartfelt declaration to the Party on Tian'anmen Square.

"Today, we make a vow to the Party: to listen to the Party's call, to be grateful to the Party and to follow its lead," they recited in unison.

The declaration garnered praise on social media platforms. The hashtags used on Sina Weibo got hundreds of millions of views, with netizens describing the students as the best representatives of Chinese youth today. 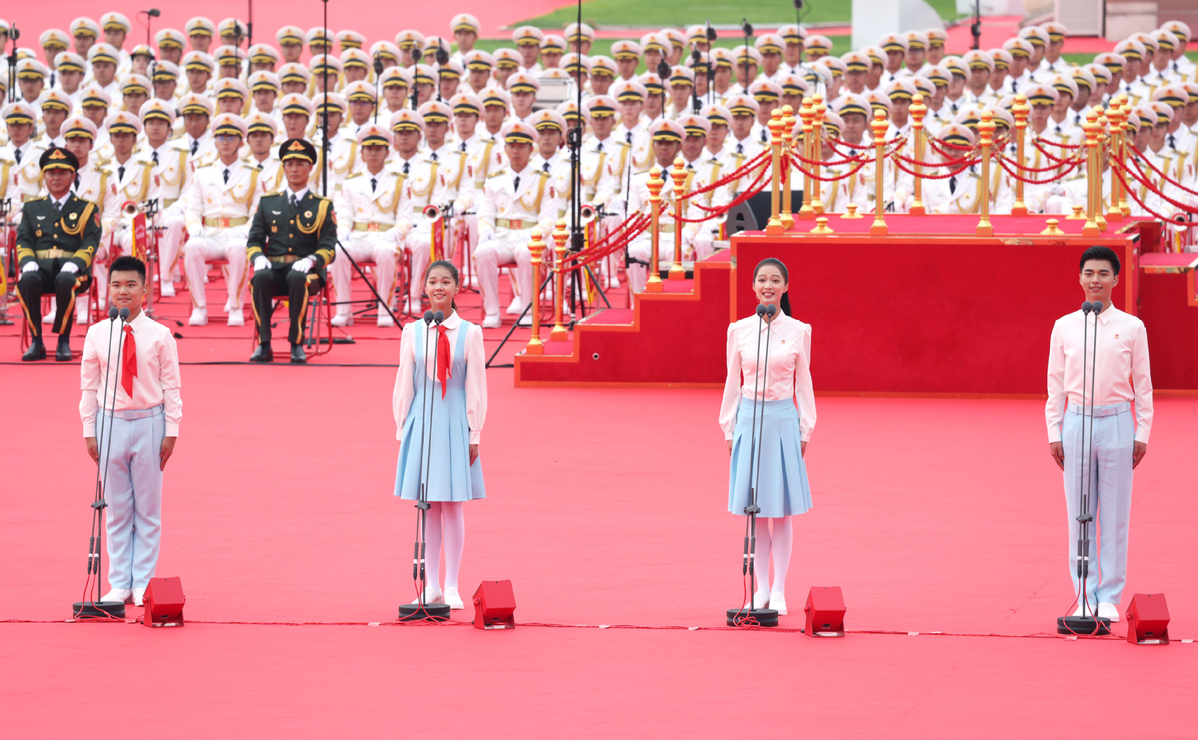 Yao Muchen (left), Peng Youxin, Feng Lin and Zhao Jianming lead more than 1,000 students in delivering a declaration to the Communist Party of China at the Party's centenary celebration on Tian'anmen Square in Beijing on July 1. (Photo: Xinhua)

"I consider it a great honor to have delivered the declaration on such an important day and I will treasure the experience for the rest of my life," said Zhao, a senior undergraduate student at the Central University of Finance and Economics.

The four representatives and their six backups were chosen from more than 3,000 students.

Zhao got up at 1 am and arrived at Tian'anmen Square at 5 am.

"It was the first time I saw the Tian'anmen rostrum glowing in the rising sun, and it was beautiful," the 22-year-old recalled.

He began to prepare for the day in March, and said that all the students had put their love and deep feelings for the Party and the country into the declaration.

When the People's Republic of China was founded in 1949, the country did not have sufficient military aircraft, so pilots had to fly twice over the square. Seeing so many advanced military planes fly over Tian'anmen Square in perfect formation on July 1, Zhao and the students applauded and cheered. "I felt a sense of happiness and pride in being Chinese," he said.

In his speech, Xi, who is also China's president and chairman of the Central Military Commission, said the future belongs to the young and that the hopes of the nation rest with them.

"In the new era, our young people should make it their mission to contribute to national rejuvenation and aspire to become more proud, confident, and assured in their identity as Chinese, so that they can live up to the promise of their youth and the expectations of our times, our Party, and our people," he said.

More than one-third of the Party's 95.15 million members are under the age of 40, and approximately 80 percent of the new Party members admitted last year are 35 or younger, according to the Organization Department of the CPC Central Committee.

Young people played a pivotal role in propelling the Party's growth after it was founded. The average age of representatives attending the first National Congress of the CPC in 1921 was 28.

Zhao said that a hundred years ago, it was also young people who began the difficult quest for national rejuvenation, and revolutionary martyrs sacrificed their lives so that young people today could enjoy good lives and prosperity in the new era.

"Standing on the shoulders of giants, we should take up the baton and become the main force in achieving the great rejuvenation of the nation," he said.

Zhao will begin postgraduate studies in September. He said he will focus hard on his studies in the coming years and put what he learns into the building of a powerful country.

Du Xinze, a postgraduate economics student at Renmin University of China who was one of the young people on Tian'anmen Square on July 1, said he was very excited to take part in the ceremony and is keenly aware of the great duty he has as a student in achieving national rejuvenation.

He said he began his preparations 100 days in advance, along with 30 other students in the university's declaration group.

"The whole process was a great opportunity for us to learn about the Party's history and strengthen our conviction and commitment to follow its lead and go wherever the Party and people need us the most," Du said.

He said he plans to become a grassroots official when he graduates, and use what he has learned at university to help formulate financial and fiscal policies.

In order to achieve the second centenary goal of building China into a great modern socialist country by 2049, the centenary of the People's Republic of China, there remains much to be done in building a stable, modern financial system, he said.

Xiao Xiangrong, director of the ceremony and a professor at Beijing Normal University, said the students gave their best performances on July 1.

The almost-1,000-word declaration was adapted dozens of times, and all the students underwent vigorous training and studied Party history, Xiao said in an interview with Beijing Youth Daily.

"We did not want the performance to focus on technique but rather, to be a genuine expression of deep affection for the Party," he said.