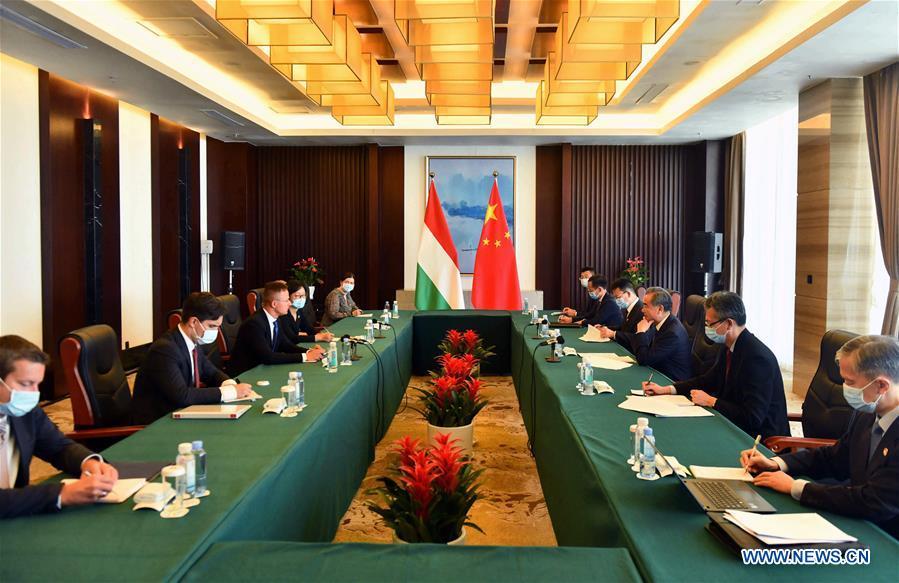 NANNING, Aug. 25 (Xinhua) -- Any attempt by a country to decouple the existing cooperation with other countries is against the laws of the market economy and the wishes of enterprises, and is doomed to hurt itself like a boomerang, Chinese State Councilor and Foreign Minister Wang Yi said Monday.

Wang made the remarks while meeting the press after holding talks with Hungarian Minister of Foreign Affairs and Trade Peter Szijjarto in Beihai, Guangxi Zhuang Autonomous Region.

In response to a query about U.S. sanctions against Chinese enterprises and the rhetoric of "complete decoupling" with China, Wang said the so-called "decoupling" is neither feasible nor reasonable, and to engage in political manipulation will only ignore its own development needs and damage the well-being of its people. "It is doomed to fail."

"To safeguard and enhance the well-being of the two peoples, we should complement each other's advantages instead of decoupling, integrate rather than isolate, and pursue win-win cooperation rather than conflicts and confrontations," Wang said.

Noting that both China and Europe are open economies, Wang said as supporters of globalization and the multilateral trading system, neither of them should allow the so-called "decoupling" to interfere with the normal operation of the global industrial and supply chains, or allow unilateral bullying to undermine normal international economic exchanges.

Noting Szijjarto is the first foreign minister of the European Union (EU) countries to visit China since the outbreak of COVID-19, Wang said while holding talks with his counterpart that in the face of the rise of unilateral bullying, China and the EU should stand up more firmly for multilateralism, complete negotiations on China-EU investment agreements within the year, and make China-EU relations more stable and mature in the "post-epidemic era."

Hailing China's successful control of the epidemic in a short period of time, Szijjarto said Hungary opposes interference in China's internal affairs, and is ready to deepen cooperation with China while fully supporting multilateral cooperation.