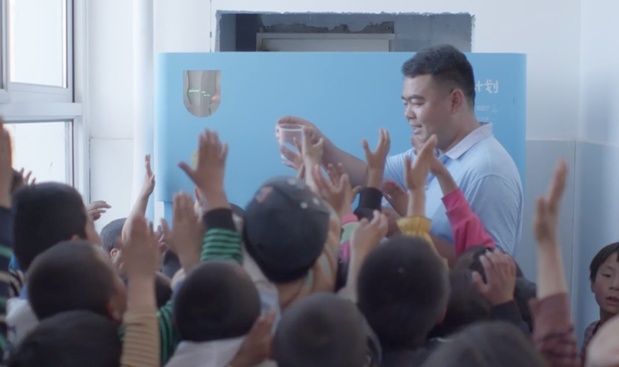 Four years ago, Ma Yongbiao was appointed principal of Mayin Primary School in Dongxiang county in Mayin village, Northwest China's Gansu province, after the previous principal died in an accident.

Upon arrival, Ma didn't even realize it was a school at all.

"This could not be the place where I wanted to work," he recalled. "There was no school name. The campus was not clean."

There were only three classrooms and a small playground. It was February and in the depths of a cold winter, everything looked even more desolate.

The first thing Ma did with help from his colleagues was to fix the school ceilings, which are all broken. He painted doors and the frames of windows, drew some murals on the walls and repaired leaky classrooms and dorms. A simple gate for the school was made, with the school name on it.

In the past, water in the school's wells was not very clean, but students might have gotten used to it. "However, if you were a newcomer here, your stomach would be upset and you could not easily get used to drinking it," Ma said.

Mayin village is on the top of a mountain, where the water contains high alkali and tastes bitter and salty. Even though the country had built a water pipeline network, because of the high terrain, water pressure was often insufficient, and the water supply was constantly blocked in the school.

The situation prompted Ma to apply for the school to be rebuilt and that a solution is found for the problem with drinking water.

After three years, from reporting, requiring land acquisition, building a new school, and then relocating, Ma, along with his colleagues and students, moved to the new campus.

The beverage giant also gave each of the students a special water bottle. Students carry the water bottles every day. Every student probably needs to drink at least three bottles of water every day, the principle said.

"They said the water tastes sweet and clean," Ma said.

The purifier at Mayin school is one of more than 50 water purifiers in Linxia Hui autonomous prefecture, donated by Coca-Cola China in 2019.

The Clean Water Program for Poverty Alleviation has been launched jointly by Coca-Cola China and the Ministry of Commerce's China International Economic and Technical Exchange Center, the United Nations Development Program and many local commerce bureaus, with One Foundation, to provide schools in remote areas with water purifiers and conduct safe water-drinking education since 2017.

Improving drinking water quality in poverty stricken areas has been a pillar in poverty alleviation efforts to improve the quality of life and hygiene conditions in these areas.

Since 2017, the program initiated by Coca-Cola China has invested 448 sets of water purifiers for a total of 434 schools in poverty-stricken areas in Northwest China's Xinjiang Uygur autonomous region and Gansu province, Southwest China's Yunnan province and Central China's Hunan province, providing clean and safe drinking water to more than 210,000 teachers and students.

Having worked to get safe drinking water and a new campus for his students, Ma's next goal is to cultivate the first batch of university students from Mayin village.

"Children here are as good as the children in the city. The only thing that they lack is the allocation of our education resources," said Ma. "Seeing this change, I feel really happy in my heart. Someday in the future, Mayin School could also have college students."