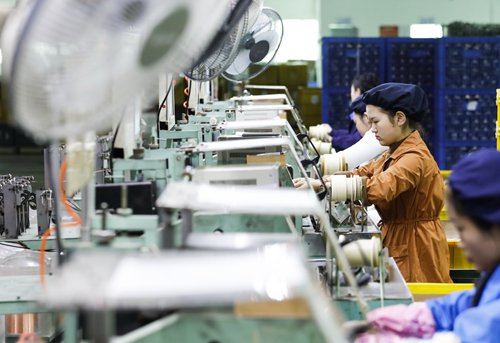 Employees work on an assembly line at a foreign-invested company in Jiujiang, East China's Jiangxi Province in March. (Photo: VCG)

China's deepening economic reforms and further opening-up will enable it to withstand US trade pressure and deal with future challenges, experts said on Tuesday.

Chinese and US officials will have a new round of talks on trade issues from Wednesday to Thursday in Washington, which will also be the first formal meeting between the two sides since June, according to media reports. However, US President Donald Trump told Reuters on Monday that he does not expect much progress from these talks.

Meanwhile, US tariffs on $16 billion of Chinese goods will take effect this week, with the Office of the US Trade Representative (USTR) set to hold public hearings from Monday to Friday in its Section 301 investigation of imports from China.

Despite the mounting US pressure and the difficulties encountered in the domestic economy recently, China's deepening of reforms and further opening-up will provide more impetus for China's economic development, analysts said. And this is China's biggest bargaining chip.

"We've seen economic policy adjusted from tight/neutral to loose/neutral, which was reflected in increased infrastructure investment," Wang Jun, deputy director of the Department of Information at the China Center for International Economic Exchanges, told the Global Times on Tuesday.

China has been pushing forward reforms such as tax cuts and reduction of some subsidies, which are also part of the country's long-term structural restructuring, he noted.

"External pressure gives us a reason to accelerate those reforms," Wang said.

China's stock market shrunk by about 7 trillion yuan ($1.02 trillion) in the first half of 2018 compared to 2017, and bearish sentiment has been on the rise. Social consumption growth has slowed to below 10 percent since April, falling to 8.8 percent in July, official data showed. Meanwhile, fixed-asset investment growth cooled to 5.5 percent from January to July and industrial output missed expectations.

In an article circulating online, a Chinese economist with the pen name of Zizaijuanshu said China should tackle some of its own economic issues to face up to external challenges.

The economist said the government should carry out large-scale tax reductions to ease the burden on individuals and enterprises, as well as streamlining administrative institutions to relieve the pressure on local governments.

In 2016, 3,415 out of 3,505 listed companies received various kinds of subsidies from the government, ranging from high-tech subsidies to investment subsidies, the economist noted. These should be reduced, as they are increasing the wealth gap and hindering market fairness, he said.

"China has its own reform and opening-up agenda and timeline. With or without the trade war with the US, we'll pursue the reforms to make our economy more sustainable and competitive," Bai Ming, deputy director of the Ministry of Commerce's International Market Research Institute, told the Global Times.

China has announced a slew of reform and opening-up measures since the beginning of this year.

"As long as the reforms yield positive outcomes, the country's growth will also contribute to the global economy and help deal with the trade friction with the US," Wang said.

China's Foreign Ministry said on Tuesday that it hopes a good outcome can be reached during the trade talks with the US this week, according to the ministry's website.