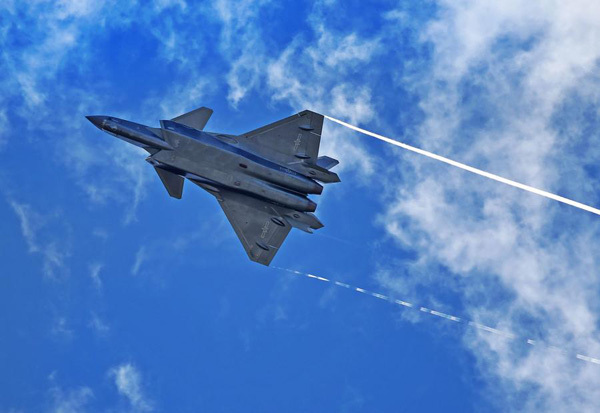 China's defense budget will increase by 6.8 percent to 1.355 trillion yuan ($209.5 billion) this year, according to a draft budget report submitted to the national legislature on Friday.

The figures were included in a report prepared by the Ministry of Finance and distributed at the opening meeting of the fourth session of the 13th National People's Congress at Beijing's Great Hall of the People.

The proposed expenditure, which needs to be approved by the lawmakers, is the sixth consecutive year of single-digit growth, and will be slightly higher than that in 2020, which recorded the lowest growth in more than three decades.

The annual Government Work Report, released on Friday, said China's national defense system and the military have made remarkable achievements since last year and the armed forces have fulfilled their duties in safeguarding national security and combating the COVID-19.

The report said the military will continue to make all-out efforts to hone the combat capability of troops and handle challenges and risks from various directions and fields so that they can better protect the nation's sovereignty, security and development.

Last year, the central government proposed a defense spending of about 1.27 trillion yuan, a 6.6 percent rise over the previous year's defense outlay. That was the lowest growth rate since 1988, when a 3.81 percent increase in the defense budget was proposed.

In 2019, the central government raised the defense budget by about 7.5 percent on a yearly basis to nearly 1.19 trillion yuan.

Zhang Yesui, spokesman for the annual NPC meeting, said at a news conference on Thursday evening that China's spending on its military is not targeted at, and does not pose a threat to, any other country.

He said that a moderate, stable increase in China's defense expenditure is for the protection of the nation's sovereignty, security and development interests and is needed by the nation to fulfill its international obligations and facilitate military reforms.

China's annual defense budget is transparent and open, as it is included in the overall national budget to be reviewed and approved by the NPC, he said, adding that China has reported its annual military spending to the United Nations each year since 2007.

"To judge whether a country poses a threat to other nations, the key lies in the nature of its defense policies," Zhang said. "China is committed to a path of peaceful development, and pursues a defense policy that is defensive in nature. Our development in the military strength is not aimed at, and does not pose a threat to, other nations."

A military observer who wished to be identified only as Cui said that it is necessary for China to moderately increase its defense expenditure as there are many fields in the global military arena that China is still left behind such as individual and logistics equipment.