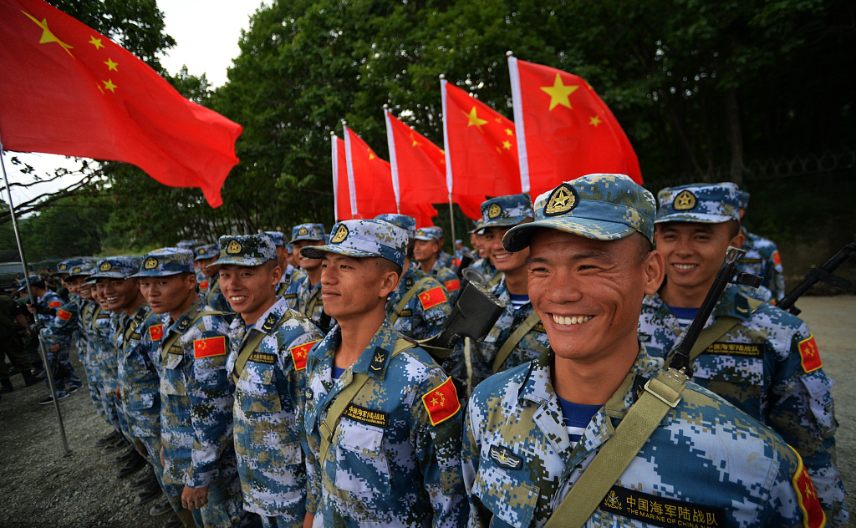 Servicemen of the Chinese team during the Intelligence Officer's Track competition at the first stage of the Seaborne Assault 2017 contest held as part of the International Army Games 2017 at the Gornostai training range in the Primorye Territory, Russia, Aug 2, 2017. (Photo: VCG)

China will continue to follow a peaceful development path and firmly follow its national military policies, which are defensive in nature, said Defense Minister Wei Fenghe.

Wei, also a member of the Central Military Commission and a state councilor, said the country will uphold the banners of peace, development, cooperation and mutual benefit, and will always build world peace, contribute to global prosperity and safeguard international order.

He said the Chinese military is willing to join hands with its counterparts around the world to deepen military exchanges and cooperation and to play a bigger role in maintaining peace and development.

"China will never seek expansion or hegemony no matter how powerful it grows, nor will it impose its will on others," Wei said.

He made the remarks at a reception at Beijing's Great Hall of the People on Tuesday night that marked the 91st anniversary on Wednesday of the founding of the People's Liberation Army.

On Aug 1, 1927, the young Communist Party of China, which was founded in July 1921, led a military uprising in Nanchang, Jiangxi province, and established its own armed force in hopes of liberating the Chinese people from the hands of the Kuomintang rulers, local warlords and foreign imperialists.

Wei said the Chinese military will continue to maintain its loyalty to the Communist Party of China and President Xi Jinping, who is also general secretary of the CPC Central Committee and chairman of the Central Military Commission. It will also deepen its modernization reform, adopt cutting-edge technologies and better regulate its troops with law and discipline.

He urged the armed forces to strengthen training and boost combat readiness, saying all their attention should be focused on improving combat capability.

Speaking about Taiwan, the general said it is an inalienable part of Chinese territory and the PLA has the resolve, confidence and capability to defeat all separatist attempts or actions for "Taiwan independence" and foreign intervention in any form to safeguard national sovereignty, territorial integrity and the great rejuvenation of the Chinese nation.