CHINA Deliverymen get gifts as tokens of gratitude

Deliverymen get gifts as tokens of gratitude 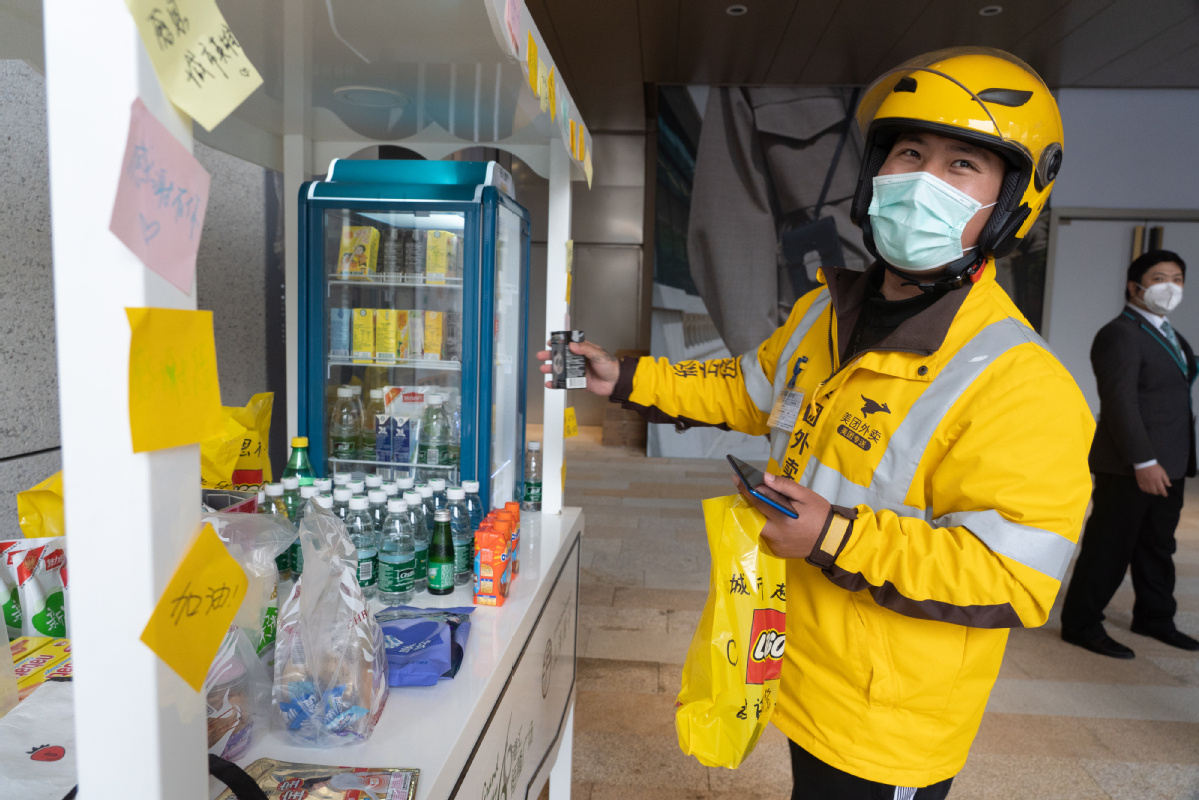 A deliveryman takes a bag of Lego toys from an unmanned pick-up kiosk at the Shanghai Grand Gateway 66 mall on Feb 28. (Photo: China Daily)

Deliveryman Wang Juntao picked up bread for a quick lunch break from a kiosk at the back door of the Super Brand Mall in Shanghai.

The only thing unusual is, he didn't need to pay this time.

The bread is among a variety of foods, drinks and daily use articles being provided for free by a bakery in the mall catering to frontline service staff like deliverymen who are busy serving residents during the coronavirus outbreak. The offering is part of a larger event in the city to show gratitude to such staff.

On Wednesday afternoon, a group of people including food deliverymen, couriers, gate guards, security personnel and cleaners gathered around the kiosk to pick their favorite gifts, which were provided by merchants in the mall.

Due to the surge in demand for delivery since people have been staying at home, and the limited number of deliverymen during the festival period, Wang has been much busier than before. The kiosk with free food and gifts made him feel appreciated for his hard work.

"Work as a deliveryman is not easy. Our busiest time is when customers need to have meals, so most of us don't have time to eat lunch and dinner. The kiosk provides us convenience, and I really appreciate the support from the public," Wang said.

Ma Yaping, another deliveryman, said that he found disinfectants, face masks and gloves at the kiosk are most popular and they would soon be taken since those products were most needed by the service staff.

He also found that many individuals have also bought food and beverages for front-line workers. Flowers, lunch sets and daily necessities all show up at the kiosk.

Many foreigners have also contributed, including a woman who came to the kiosk at the Jing'an Kerry Centre at noon and handed hot coffee to deliverymen.

A comment from a Canadian netizen named Aaron reads: "It's been a hard time for all of us. But the heart and love I've seen from everyone to lend a hand and help each other have been heartwarming. Shanghai is my home, and I love everything about it."

"Some people chose the cosmetics and gift sets for their families or girlfriends due to the upcoming International Women's day. I also saw a deliveryman pick up a pair of new shoes because he has to run while delivering every day, and a cleaner picked up hand cream since she needs to disinfect every day," said Zhang Yang, the initiator of the kiosk event.

"During the outbreak we all stayed at home, and the people who served and helped us the most were the deliverymen, security staff and cleaners, so we wanted to launch a platform for people to express thanks to them," said Zhang, also the founder of Shanghai Quanzi.

So far, eight shopping malls in the city have set up the unmanned kiosks after one showed up in the Grand Gateway 66 shopping mall on Feb 26.

The event will continue through Friday, according to Zhang.

Zhang said the idea was inspired by unmanned refrigerators two years ago that provided free cold water to service staff in the summer.

"So far, thousands of workers have benefited from the event. They don't have to receive any expensive gifts, and kiosks don't accept donations of money. What they need the most is being protected and understood," he added.