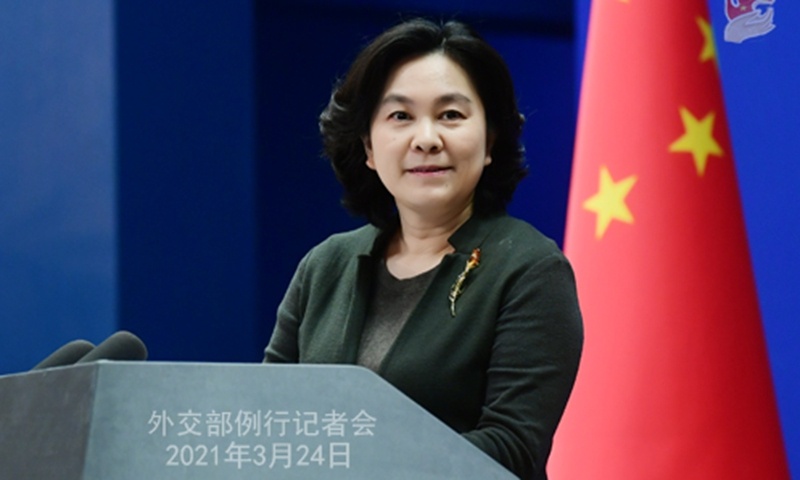 The Afghan situation again proves democracy has no set model and the standard is whether it meets people's needs and expectation, not solely what the US and its allies say, a Chinese Foreign Ministry spokesperson said at Friday's routine press conference, using the metaphor that a Chinese stomach cannot adapt to cold milk every morning and an American is not accustomed to chopsticks.

Hua Chunying, the ministry spokesperson, expressed sense of loss on the death of Zaki Anwari, a 19-yar-old Afghan national youth team football player who fell from a US aircraft conducting an evacuation mission on Monday. Democracy is not Coca Cola — the US produces the syrup and it tastes the same everywhere, Hua said.

What is democracy, who is authorized to define it and how to evaluate whether a country is a democracy? Those rights are not monopolized by the US and its allies.

China's socialist democratic politics is the broadest form of democracy, which represents people's will, conforms to China's situations and is embraced by people. The Communist Party of China represents the widest people's interests, not any interest groups or privileged elites. Whether the people embrace, acknowledge it is the criterion of all work, the spokesperson said.

China's legislative decisions all go through procedures and are based on scientific and democratic policymaking. More than 1 million submissions were collected when Chinese government make the 14th Five-Year Plan (2021-25). China's development and stability are based on people's democracy and the creativity that comes with it.

US deems the "one man one vote" as the best form of democracy, which is a narrow understanding. "We all know US elections are manipulated by interest groups and the nature is money politics. US politicians prioritize ballots in two or four years, not the country and people's interests," Hua said.

When tens of millions of Americans are struggling with COVID-19, American parties continue their political wars and 600,000 lives have been forfeited. "Does the polarization between the rich and the poor in the past decades mean democracy? [George] Floyd cannot breathe and gun violence prevails, American democracy belongs to whom? Which party represents the interests of all Americans?"

Take a look at the result of US promoting American-style democracy. Which country invaded by the US enjoys peace, security, freedom and democracy, Iraq, Syria or Afghanistan? Hua asked.

Democracy should not be built on hollow slogans, spiritual opium to fool people, or excuses to smear others and maintain hegemony. Using democracy to form cliques, wantonly interfere in others' internal affairs, and even suppress other people's rights to development and better lives is undemocratic, autocratic, hegemonic and totalitarian, the spokesperson noted.