"When I was living in the Kong Family Mansion, I had to rise in the early morning to attend school and had whatever the school kitchen served for breakfast," Kong Deyong said. 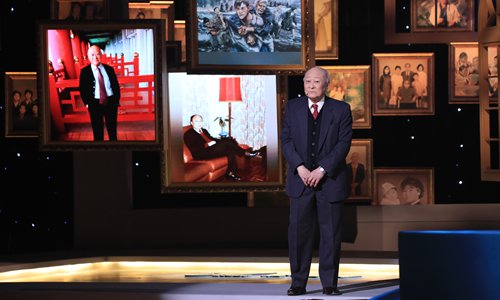 Kong Deyong shares stories about his residency at the Confucius mansion and interprets family virtues at a talk show on China Central Television on February 10. Photo: Courtesy of Kong Deyong (Photo: Global Times）

He added that his eight years of spartan living at the original home of the ancient scholar Confucius in Qufu, East China's Shandong Province, cultivated him into a hardworking and frugal soul.Kong and his father moved into the mansion at the end of 1937 to safeguard the legacy of their ancestors.They made the move because his cousin who resided in the mansion fled to Chongqing in Southwest China to escape being kidnapped by the invading Japanese army.In 1998, 72-year-old Kong Deyong presided over the fifth compilation of the Kong Genealogy. It took 13 years to wrap up the compilation.Traditional valuesA plaque with four hand-written characters "shi li chuan jia" (meaning "Poetry and ethics should be passed down through the family") is hanging over the desk in Kong's study in a compound of Beijing's Xicheng district, where he explained to the Global Times the family virtues of the Confucius clan.Kong deemed filial piety as the most important family ethic, followed by honesty. He recalled a punishment he suffered from his father after he cheated in a family game."I was afraid of running into my father over the following days, and I never lied after that," said Kong.When Kong started his own company, an overseas potential client asked about his way of doing business. Kong replied that Chinese businesspeople uphold the rule, "Genuine goods at a fair price, and neither the old nor the young will be cheated." "Since our business has just started, while you are already successful, we are the younger party and you are the senior party, and I hope we could follow the rule in our future cooperation," Kong said. His genuineness secured him the first order."Honesty and modesty, which I learned from my family education, contributed to the success of my career and business," said Kong. In addition, he says diligence and frugality should also be carried on through the generations. "My father used to be a senior official of Shandong Province. He was generously paid but practiced frugality," Kong said. "I just had one silk robe for festivals and important occasions, which I had worn for many years, and the rest of my clothes were all made from plain materials."In the Confucius mansion, sleeping late and not eating all the food on the table were never allowed.Evolving virtuesWhen asked whether the family's virtues have developed with the changing times, Kong shared a story about his first business errand to Tokyo.A Japanese senior official raised a question at the beginning of their meeting. "How come you became a businessman, since Confucius, your ancestor, labeled merchants a low-class occupation below scholar, farmer and artisan?" the official asked. "Wouldn't your ancestor be angry at you?"Kong replied, "Mencius, another Chinese scholar born 100 years later than Confucius, said Confucius was a 'sage of his time.' My ancestor would endorse international trade if he lived in the contemporary world, because peace and communication is needed to develop contemporary society. Confucius would have a more successful career than I do, and he would be proud of my international career if he knew." Everyone in the room applauded at his remark.The traditional concept of filial piety has also changed. "Traditional filial piety stresses unconditional obedience, but in modern society, your parents might suffer if their errors cannot be corrected," Kong said. "Unconditional obedience should give way to 'respect,'" he added. On preserving family virtues, Kong urged parents to set themselves an example to the children and create a good environment in family education."Family virtue is about good habits in the petty matters of the daily life. A good family environment is developed from the good habits," Kong told the Global Times.Kong said he and his cousins used to gather together to study poems in their spare time and a good learning environment was formed."Now that the Party is encouraging the construction of good family virtues, the Kong family will take the lead to rebuild an upbeat family environment," he said.