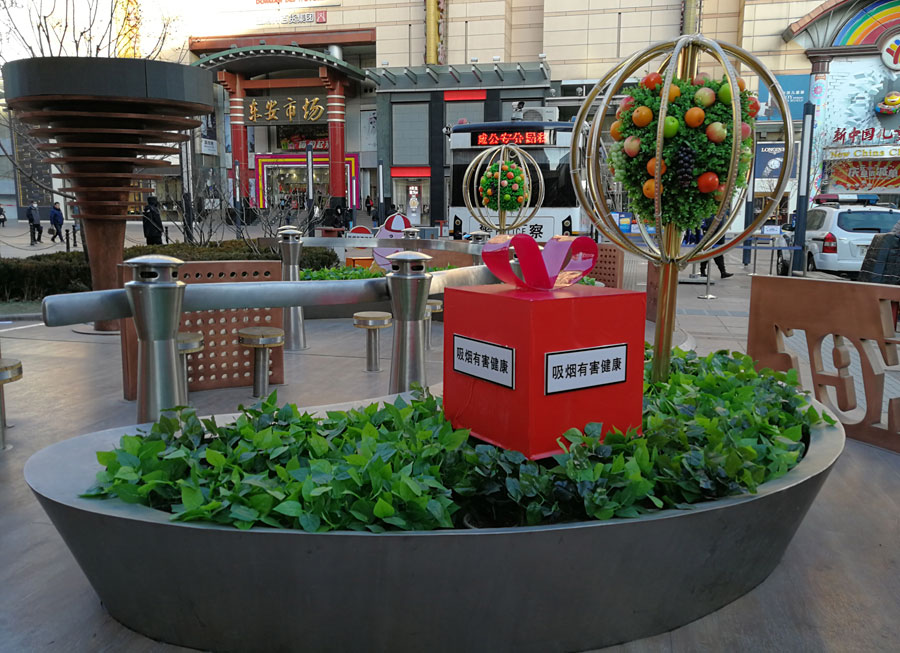 A designated outdoor smoking area sprawling about 70 square meters on a landmark commercial street in Beijing has sparked a furious backlash from tobacco control advocates, who urged immediate removal of the installation.

Within an hour on a chilly Tuesday, about five smokers stopped in the area to light up cigarettes.

Zhang Jianshu, head of the Beijing Tobacco Control Association, denounced the installation as a severe violation of the city's tobacco control regulation launched in 2015.

"The regulation stipulates that smoking venues should be set up far away from areas where people often cross and cluster, and there must be prominent signage that informs the public of the health risks involved in smoking," he said.

He added that the area risks blocking access for firefighting equipment, compounding the hazards it poses to public safety.

Guo Jinyang, 23, a student who returned to Beijing for winter vacation, said the outdoor smoking area on the pedestrian street exposes passers-by to harmful fumes.

"It's inappropriate to have the facility in the open space," he said. "Most smoking areas I've seen in other countries are at least enclosed."

Wangfujing Street, stretching 1,400 meters, is one of the city's iconic shopping areas. It sees an average of 250,000 visitors daily, about 70 percent of whom are domestic travelers from outside of Beijing or foreign tourists, according to the street's management authority.

Zhang said the association has reached out to street regulators and government bodies, which promised to remove the installation.

"However, the ashtray stands and some adornments are made from steel that's difficult to dismantle. So preparations are underway to facilitate the removal," Zhang said.

Beijing ZoomDu Eco-Technology Co, which led the design and construction of the smoking area, has built seven other designated venues for smokers across China. The majority are indoor smoking rooms at airports.

Jia Peipei, the designer of the Wangfujing facility, said the intent was to respect the rights of smokers and protect nonsmokers from breathing secondhand smoke.

Gauden Galea, the World Health Organization representative for China, said in an interview on Beijing TV, that he firmly rejected the notion that smoking is civilized when done in such an installation.

"By creating an atmosphere of so-called civilized smoking, the tobacco industry is trying to undermine the existing strong legislation to make Beijing a smoke-free city," he said.