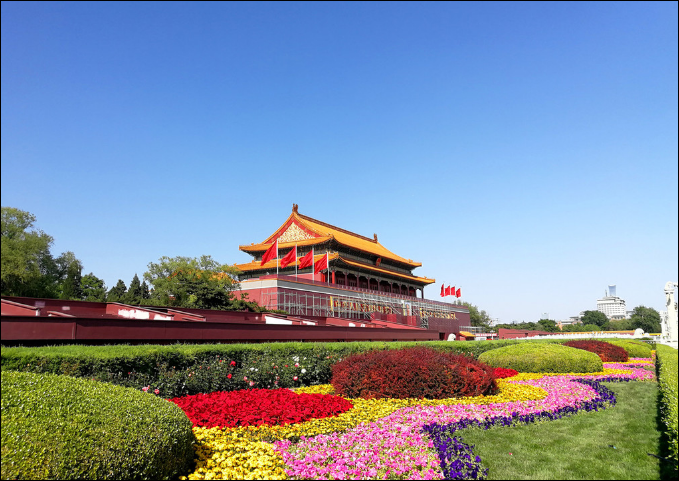 More than 100,000 people are expected to take part in a massive parade at Beijing's Tian'anmen Square on the morning of Oct 1 - National Day - to celebrate the 70th anniversary of the founding of the People's Republic of China, it was announced on Thursday.

The parade, with marching groups, will feature floats and music during a free and lively show, Du Feijin, head of the publicity department of the Beijing Committee of the Communist Party of China, said at a news conference in Beijing.

It will include participants from all walks of life and ethnic groups, he said.

Hong Kong, Macao and Taiwan compatriots, as well as overseas Chinese and foreigners, will also join the parade, Du added.

The 70 years of growth and hard work since the founding of New China will be displayed via groups of marchers, each telling the story of a period of time, Du said.

Tian'anmen Square will feature red decorations representing the glorious history of the Party as it led the Chinese revolution to victory, he said, adding that 70 red lanterns will be hung parallel to the east and west sides of the square.

About 10 Hong Kong police officers, including some injured while coping with recent violent protests in Hong Kong, were invited to attend a gala show on the evening of Oct 1, China Central Television reported on Thursday.

Starting next month, a series of grand events are planned to celebrate the 70th anniversary. An exhibition featuring the achievements over the past 70 years will be held at the Beijing Exhibition Center starting in September.

Activities including raising the national flag, singing the national anthem, commemorating revolutionary martyrs and singing competitions will be held nationwide to let more people take part in celebrating the birthday of the motherland, he added.

A documentary featuring highlights during the 70-year journey will also be broadcast on TV and a set of commemorative coins and stamps will be issued.