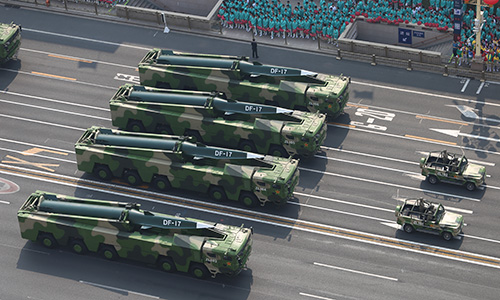 Making their debut in the general public for the first time, DF-17 missiles join the National Day parade held in Beijing on October 1, 2019. (Photo: GT)

The DF-17, China's hypersonic missile that was first revealed at the National Day military parade on October 1, might not be the only hypersonic aircraft program China possesses, a report by the state broadcaster suggested.

Analysts stressed that China will not fall behind in related technologies compared with the US and Russia.

"From the test subjects that were made available to the public, the Xingkong-2 (Starry Sky-2) might use a different flight pattern to the DF-17," said military expert Ma Jun on Military Time, a China Central Television (CCTV) program on military affairs, on Saturday, without further elaboration.

According to Ma, the Xingkong-2 is still in the trial phase and more tests are expected.

The Xingkong-2 Ma referred to is the first Chinese waverider hypersonic vehicle unveiled by the country, dating a year earlier than the DF-17.

Designed by the China Academy of Aerospace Aerodynamics under the China Aerospace Science and Technology Corporation, the Xingkong-2 was successfully tested at a target range in Northwest China in August 2018, the academy announced then.

When the DF-17 missile made its debut at the National Day parade this year, some thought it might be the final product of the Xingkong-2 project.

One distinctive difference between the Xingkong-2 and the DF-17 is that the former has a fairing and the latter does not, making the two very different in appearance alone, analysts pointed out.

They noted that the time does not match either, as the Xingkong-2 was only tested in 2018 and is not likely to enter Chinese military service as early as 2019.

The DF-17 is said to be a glide-boost vehicle, but it is not known what type the Xingkong-2 might be, other than it could be different from the DF-17, although it was also propelled by a rocket, according to Ma.

The US and Russia are striving to develop hypersonic weapons with both glide-boost and air-breathing technologies, as the two have different strengths and shortcomings, a military expert who asked not to be named told the Global Times. China will not fall behind and could develop multiple types of hypersonic weapons using different technologies in the future, the expert predicted.