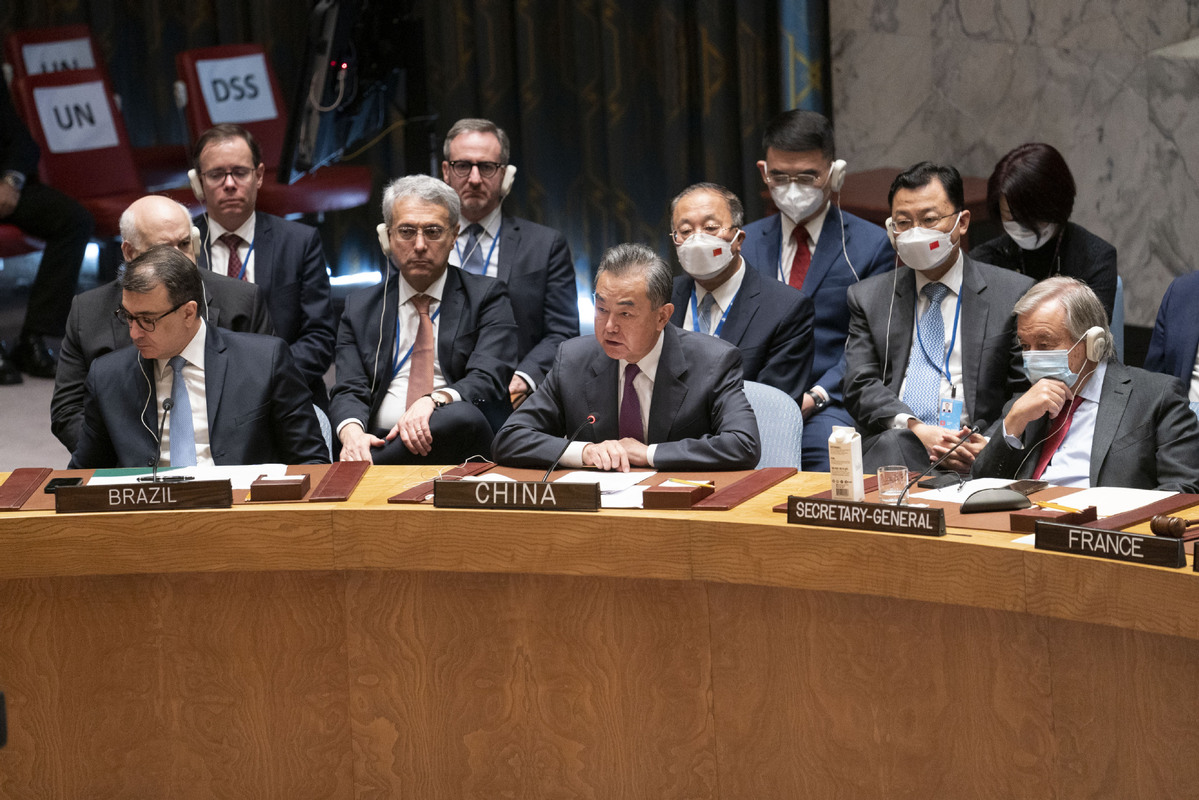 Parties to the Ukraine crisis should resume dialogue as soon as possible, said State Councilor and Foreign Minister Wang Yi, who urged them to discuss their legitimate concerns and viable alternatives to obtain peace.

Making the remark at a foreign ministers meeting on the issue held by the United Nations Security Council in New York on Thursday, Wang urged all parties to practice restraint, and called on the international community to play a constructive role in easing tensions.

"No trial and error should be allowed on the security issue of nuclear facilities. We must prevent any risks of accidents," Wang said.

Wang, who called for concrete actions to alleviate the humanitarian situation arising from the conflict, said the parties concerned should obey the international humanitarian laws and minimize the number of civilian casualties.

Also, an international investigation should be objective, just and fact-based, and avoid becoming politicized, Wang said, adding that the world should support the UN's humanitarian aid institutions in continuing to provide assistance for the people affected.

Underlining the need to contain the spillover effects of the Ukraine issue, Wang called for concerted efforts to ensure the stability of the global energy market.

China supports the efforts of UN Secretary-General Antonio Guterres in promoting a resolution to the issue of food exports from Russia and Ukraine, and welcomes all countries to respond actively to China's Cooperation Initiative on Global Food Security, Wang said.

Countries should not abuse unilateral sanctions, let alone make developing countries pay the price, said Wang, stressing that the Security Council should uphold objectivity and justice, promote talks and work for a political settlement of the Ukraine issue.

Wang also met with Ukrainian Foreign Minister Dmytro Kuleba on the sidelines of the UN General Assembly on Thursday.

The "four musts", put forward by President Xi Jinping, form the most authoritative statement China has made on the Ukraine issue, and are the fundamental principles China follows while viewing and handling the issue, Wang told Kuleba.

Xi made clear China's position on the issue in a virtual summit with French President Emmanuel Macron and German Chancellor Olaf Scholz in March.

As a responsible major country and a permanent member of the Security Council, China has always worked to facilitate talks, Wang said in his meeting with Kuleba.

This year marks the 30th anniversary of diplomatic ties between China and Ukraine.

China hopes to take the anniversary as an opportunity to plan the development of bilateral ties for the next stage and carry on the traditional friendship between the two countries to better benefit their peoples, Wang said, thanking the Ukrainian government and people for helping Chinese citizens, especially students, evacuate from Ukraine.

Kuleba said his country values China's international status and influence, and expects China to play an important role in easing the crisis. Ukraine hopes to conduct talks that are in line with its national interests, he said.