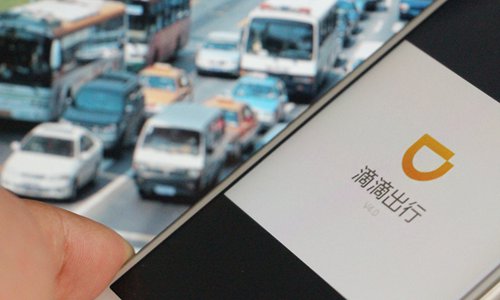 On May 5, a young airline stewardess in Zhengzhou, Central China's Henan Province, ordered a hitch service from Chinese ride-hailing provider Didi Chuxing just like the company's other 450 million users in the country, but she never made it home.

Three days later, she was found dead in a semi-naked state with her chest stabbed more than 20 times. Police also found semen on her body, the Beijing News reported.

She was allegedly murdered by the Didi driver who picked her up that day, and who later killed himself by jumping into a river, Henan police said.

Didi has reportedly apologized to the victim's family and suspended its inter-city hitch service across the country for a week since May 12 to overhaul operations. Hitch is one of the 11 services Didi offers in China.

The case has sparked a national outcry over passenger safety, the online car-hailing platform's responsibilities and data privacy.

Didi Chuxing claims it provided 7.4 billion travel services to 450 million users in over 400 cities in 2017.

Some hitch service drivers revealed online that the company asks them to comment on passengers who cannot see the remarks. Comments such as "really beautiful," "sweet voice" or "long white legs" were frequently seen on the service's evaluation page.

"Didi is suspected of infringing on passengers' personal information by illegally collecting and sharing it," Xie Yongjiang, deputy director of the Institute of Internet Governance and Law at the Beijing University of Posts and Telecommunications, told the Global Times.

Xie said that remarks on passengers' appearance together with the regular commuting path could accumulate and make it easier to identify a person, which resulted in the leak of personal information.

Gu Dasong, an associate professor of transport laws at Southeast University, East China's Jiangsu Province, told the Global Times that Didi's hitch service actually provides a social platform for making friends and is an environment-friendly travel option, but remarks on appearance may be used by criminals like the murderer in the Zhengzhou case.

This is not the first time Didi Chuxing is in trouble over a murder case. In May 2016, a 24-year-old teacher from Shenzhen was killed by a Didi driver, Caijing reported.

Fear has led some young female passengers to use a man's name and picture and hide their real age on Didi's platform.

Internet companies including Didi should ensure data safety  and personal information should not be disclosed without user consent, Xie said, suggesting Didi make its comments function optional and change it to a grade-based one from being  descriptive.

Gu said that making friends and green commuting should be encouraged, but Didi should rope in civil society groups on environmental protection to reduce chances of misuse of the hitch service, and organize offline activities to guide Didi users.

The suspect in Zhengzhou case acted illegally by using the Didi account of his father, who had passed the safety checks required by the ride-hailing company's inter-city hitch business, a Didi statement said.

The company will intensify vigilance over its drivers and resolve the information discrepancies between drivers and their vehicles.

"The rules made by car-hailing firms are for the company's development and commercial purposes, so it's important that governments in different cities come up with guidelines on the responsibilities of these companies and detail requirements for drivers," Gu said.

The State Council issued guidelines for taxi development in 2016, which said that drivers and vehicles belonging to online booking services should meet basic requirements, and internet taxi booking platforms should improve management of vehicles and drivers.

"With government guidelines it will be easier to identify platforms involved in illegal operations and protect passengers' rights," Gu said.

Didi said it cooperated with the police department to fire drivers who used to be criminals, drug addicts and mentally disabled in 2016, but media reports said the suspect in the case had been accused of traffic offences.

According to Gu, excluding all former criminals is not right. Government guidelines should regulate drivers' background, and those who don't fall foul of the law for a certain period after finishing their prison terms should be allowed to drive for Didi.