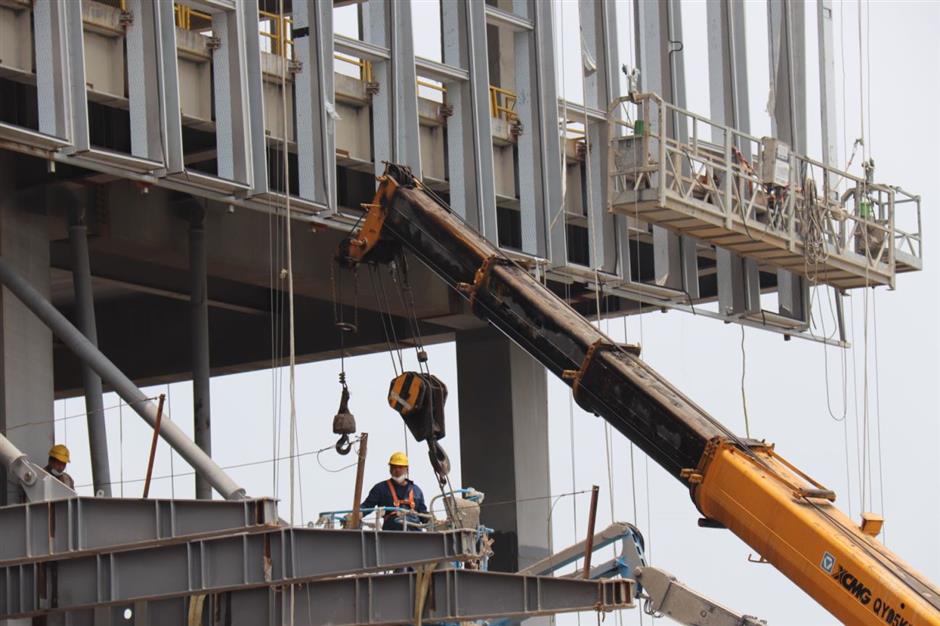 A worker busy on a landmark office building for the Nanda Digital City project. (Photo: Shine.com)

Senior villager Zhang Xidi in north Shanghai's Nanda area has realized her dream to own a specialized room at home for her physiotherapy instruments.

On her 70th birthday, she moved into a brand-new apartment with three bedrooms in a modern residential highrise, which was built on the former farmland she had lived for life near the once notorious Nanda industrial zone in Baoshan District.

"I witnessed the development of the factories and chimneys at the industrial parks. Now, from my new home, I'm looking forward to its grand transformation into a futuristic city," Zhang said.

As the COVID-19 pandemic wanes, construction has resumed at the Nanda Digital City in north Shanghai to turn a once polluted industrial site into eco-friendly high-tech parks and communities.

The digital city has been listed as a key site to achieve Shanghai's ambition to become a scientific innovation center with global influence.

The first batch of resumed projects after the COVID-19 resurgence include a central park covering 200,000 square meters at the former heavy industrial site in Baoshan District.

Structures have been completed on two more than 100-meter-tall twin towers, which will become the tallest and most iconic buildings in the digital city.

According to the blueprint, the future digital city will feature parks, waterways and transit-oriented-development (TOD) projects, along with sprawling underground space for Metro stations and commercial facilities.

Nanda was once the city's leather production and chemical engineering center with more than 200 companies and factories, but pollution and safety concerns meant the site was known as one of the city's most polluted area.

Action against the problems began in 2009 and over 50 companies were shut down. Most of the land has since been remediated.

Baoshan is cooperating with the Lingang Group to convert the area into an intelligent park and community with global architectural, urban planning and engineering firms.

The region has finished its comprehensive pollution treatment campaign, including land remediation.

Construction has also started on over a dozen urban infrastructure projects, including nine roads, two bus terminals, three greenery projects and three neighborhoods, marking the beginning of the grand transformation of the site.

More than 100,000 people are expected to make their homes in the area with 40 parks planned covering over 40 percent of the area. Branches of Shanghai's quality schools and hospitals will be built in the region, along with over 10,000 talent apartments and high-end commercial neighborhoods.

Landmark office buildings have been planned amid a central business district to be home to multinational headquarters, as well as leading firms in the digital economy, livestreaming, biomedicine, artificial intelligence and fintech.

The digital city will also become a pilot project for the city's digital transformation. Many smart applications will be initially tested in the area, said Zhang Peng, chief commander of the Nanda development headquarters.