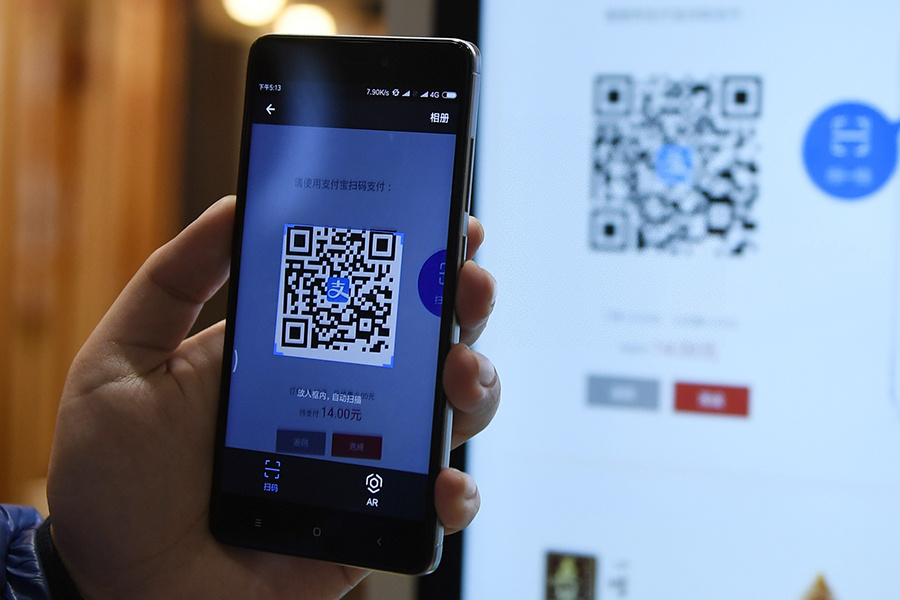 A consumer scans an Alipay QR code to pay for the order at a self-service restaurant in Hangzhou, Zhejiang province. [Photo/Xinhua]

Unfamiliar with customer service patter, Zhang Jiayuan was often mistaken for an automated message when he started to work for fintech company Alipay three years ago.

With a computer in his small bedroom, the 34-year-old hemophiliac managed his own work on an average hourly pay of up to 25 yuan ($3.60).

"Bills, refund orders, train tickets … Where there's a customer with a problem, I'm here to help," Zhang said. A big part of his job is to calm down irritated individuals.

Zhang gradually developed various conversation techniques to address both their irritation and problems, which led to a sense of fulfillment.

His ability to earn money from home surprised Zhang's parents at first.

"I'm grateful to live in this era and have this new job," he said. Zhang was diagnosed with hemophilia when he was in primary school and used to shut himself away from the world, depressed, with an injured left leg.

In 2015, a job ad in an online chat group helped drag him out of his despair. He signed up with some 100 others, completing various training programs and evaluations, and was hired as an Alipay "cloud customer service clerk".

According to Zhang, more than 20,000 people are currently doing the same job, scattered over some 350 cities and counties across the country.

Some of them suffer from rare diseases, just like him, while others were previously held back by physical disabilities.

With over 40 new occupations unveiled on its platform, Alipay has created nearly 7 million jobs, showing the great benefits of the digital economy on the labor market, as well as the infinite possibilities it brings, according to an Alipay report.

He Jianhua, a researcher and former deputy head of the Shanghai Academy of Social Sciences, said the digital economy has spurred the gig economy and provided more flexibility to the labor market. A much more efficient collaborative revolution is almost upon us, He added.

Bus route planners, garbage sorters, AI data annotators and other jobs are just around the corner.

More importantly, over two-thirds of these jobs are part-time ones, and about one-third can be completed online, the report said, also noting that half of the new workers live in small cities and counties.

These gigs are not only for young people. The 180,000 planters and forest rangers who planted trees for numerous online users of the green initiative Ant Forest were all herders and farmers, more than half of whom were age 40 and older.

After finishing his rehabilitation exercises, Zhang sat back down before his computer and resumed his work.

"I don't like to be labeled as disadvantaged," he said. "In this era, every job deserves some applause."