More than 60 percent of Chinese prefer reading on digital devices or via the Internet in 2018, according to the survey which the report was based on. 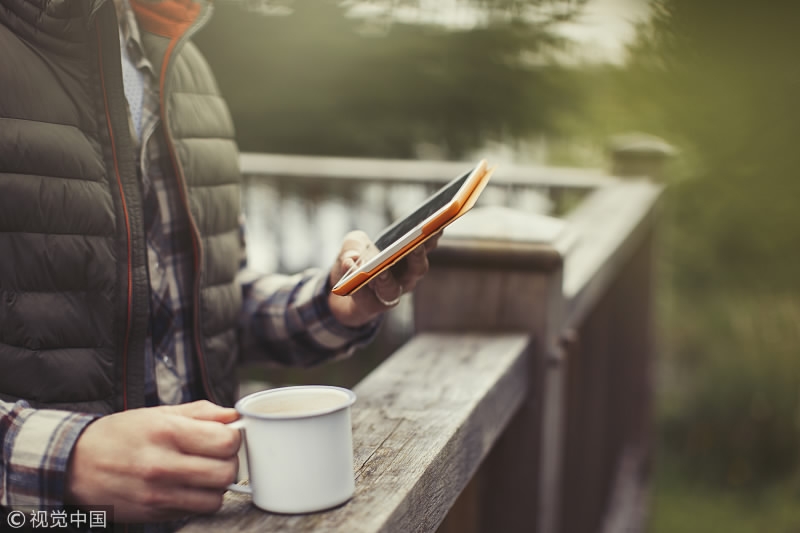 A man drinking coffee and using a digital tablet on a balcony. (File Photo: VCG)

Conducted by the Chinese Academy of Press and Publication (CAPP) from August to December 2018, the survey had a sample size of 19,683 people from 29 provincial-level regions and is the 16th of its kind.

Around 80.8 percent of Chinese adults read books, newspapers or magazines in 2018, a slight year-on-year increase, extending the rising streak to six years in a row.

About 76 percent of the respondents had accessed reading content through digital channels, including online reading and reading on mobile gadgets, up from 73 percent in 2017.

According to Wei Yushan, head of the CAPP, the growth of digital reading made reading generally more popular among Chinese, but has also led to the diminishing numbers for paper reading.

Only 38.4 percent of those surveyed said they preferred reading paper books, a 6.7-percentage-point yearly decrease, while Chinese adults read only 26.38 issues of newspapers per capita in 2018, down from 33.62 in 2017. The figure for reading magazines shrank from 3.81 to 2.61.

About 96.3 percent of teenagers and children aged between 9 and 13 read books last year, 3.1 percentage points higher than that of 2017.

Reading with young children was a regular practice in 68.7 percent of Chinese families with children aged from zero to eight, however, with parents spending an average of 22.61 minutes reading with their children every day, compared with 23.69 minutes in 2017.

In general, there are still more positives to gain from the report. Apart from digital reading, listening to audiobooks has become a new growth point for the Chinese in terms of their reading habits, the report shows.

About 26 percent of adult Chinese and 26.2 percent of young Chinese under 18 listened to audiobooks in 2018, up 3.2 and 3.5 percentage points year on year respectively.

Among the adult respondents, 11.7 percent used applications on their mobile gadgets to access audiobooks, while 6.4 percent opted to listen to them through radios.

Moreover, about 67 percent of Chinese adults called for reading festivals or other public reading activities, according to the report.