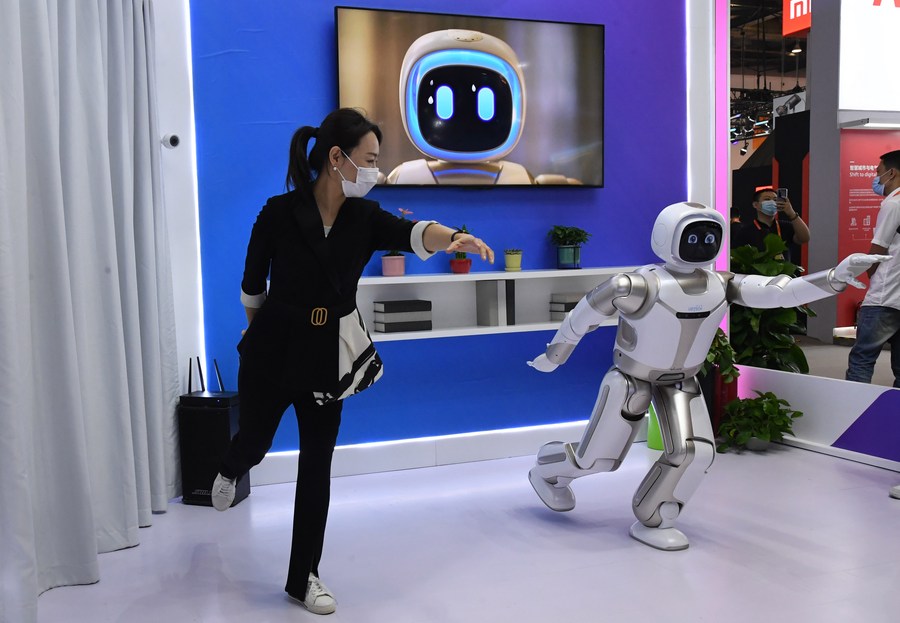 A woman interacts with a service robot (R) during the 2020 China International Fair for Trade in Services (CIFTIS) in Beijing, capital of China, Sept. 6, 2020. (Photo: Xinhua)

BEIJING, July 25 (Xinhua) -- A man visits a digital experience center in a warehouse in Beijing, and a digital figure appears on the screen. The figure mimics his every movement, and it can even dance with him.

As the 2022 Beijing Digital Economy Experience Week started this month, people are invited to a series of experiential activities, such as being immersed in the starry sky via VR or communicating with ancient figures in digital form using body language with the help of a motion capture system.

In the first quarter, Beijing's added value of the digital economy reached 387.36 billion yuan (about 57.35 billion U.S. dollars), up 7.2 percent year on year and occupying 41.2 percent of the Chinese capital's gross domestic product (GDP) during the period, according to the economy and information technology bureau of Beijing.

Digital services are applied in more fields. Based on the imaging technology and AI skin detection algorithm, Meitu, an AI-driven technology company, has provided businesses and institutions related to the skin beauty industry with digital services.

With the combination of online and offline services, beauty industry stores will receive more guests, and customers can have a better skin condition not only in the virtual world but also in the real world.

For the first half of 2022, China's combined output of the electronic information manufacturing, software, communication and internet industries surpassed 10 trillion yuan, according to the Ministry of Industry and Information Technology (MIIT).

The system has enabled a single farmer to breed some 50,000 ducks, improving the efficiency of livestock stock production, said Yu Jie, chairman of the company.

From 2017 to 2021, the output of China's digital economy increased from approximately 27 trillion yuan to over 45 trillion yuan, with its proportion to GDP growing from 33 percent to 39.8 percent, according to Cao Shumin, deputy head of the Cyberspace Administration of China.

"The development of the digital economy is in fact digitization in various industries," said Liu Shangxi, president of the Chinese Academy of Fiscal Sciences.