Instead of staying in bed or being confined to a room all day, 30 young orphans with disabilities at a children's welfare center in Lanzhou, Gansu province, have a tight schedule every day. 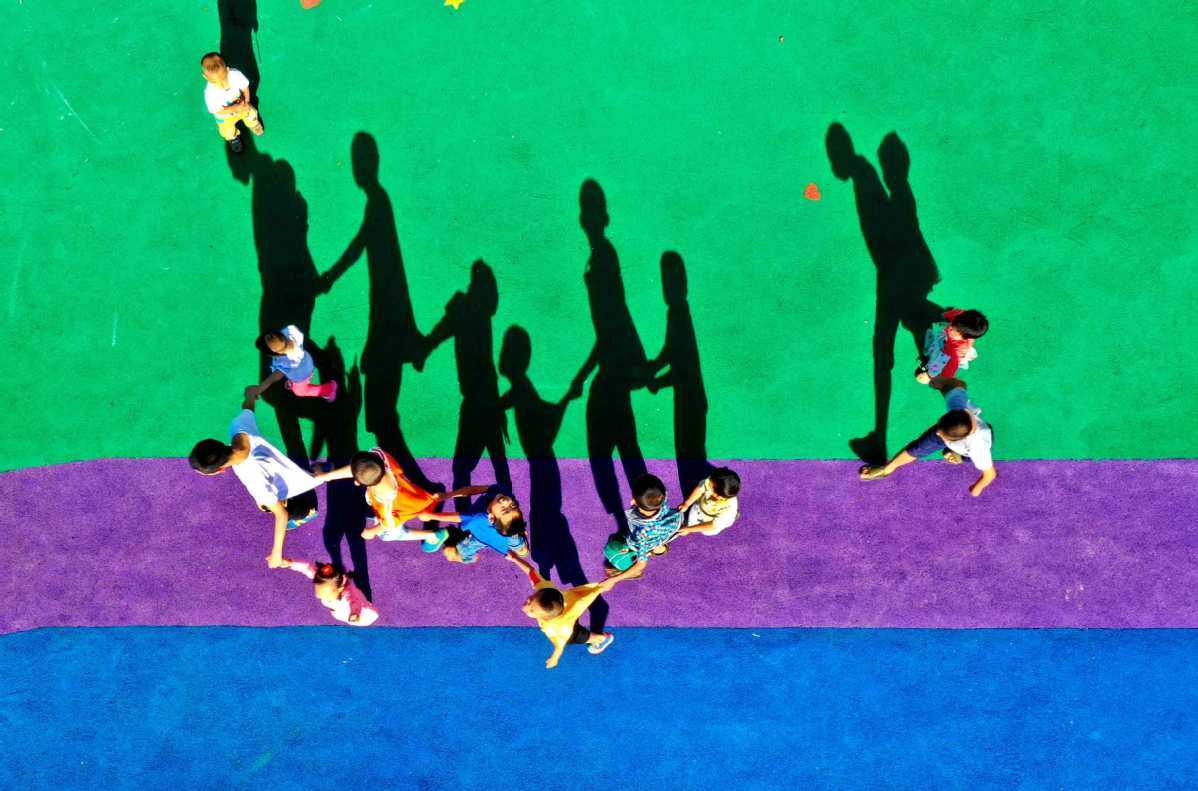 An aerial view of children playing at a orphanage in Taiyuan, Shanxi province, in August. (Photo: Xinhua)

Five full-time special education teachers are in charge of the orphans' emotional training and character building, to prepare them for attending kindergarten and school.

The orphans were born with conditions including cerebral palsy, heart defects and Down syndrome.

The center set up an early education program last year－guided by the concept of inclusive education－which ensures access for all children under the age of 3 to education, with the exception of those who are severely disabled and have to stay in bed.

Inclusive education, originally proposed by UNESCO, respects the individual differences of children and encourages the implementation of education for all without discrimination.

The program offers opportunities for students with disabilities to learn with their able-bodied peers.

Zhang Qinyue, from the center's infants and young children division, said children used to be sent to classes as soon as they turned 3. It was quite a challenge for them to fit in without any preparation for the education system.

"Most kids would scream and cry due to a sense of insecurity, and some of them had to be eventually sent back," she said.

Jiang Xue, a 24-year-old early education teacher, usually starts her day by taking five children from their nursing rooms to a playroom.

She cuddled a 1-year-old boy in her arms, gazing at his eyes and whispering his name.

The boy, with a congenital cleft lip and palate, smiled back at her. "Interactive care can increase his sense of security," Jiang said.

In another classroom, 30-year-old teacher Li Jing played with seven children, who "graduated" from the inclusive education program six months ago.

"Early education has improved their ability to adapt to challenging and unfamiliar environments. And they show less resistance to strangers and in the classrooms," Li said.

Over the past year, inclusive education has benefited 238 disabled orphans of all ages at the center, pooling professional medical equipment, effective rehabilitation treatments, faculty members and targeted courses.

In May, a special education school was formally established at the orphanage. It will start taking enrollments next autumn, offering professional early education to more children in need.

According to the Ministry of Civil Affairs, there were 1,217 child welfare institutions across the country by the end of March, in contrast to no more than 300 in 2008.

About 68,000 orphans, or 22.8 percent of the country's total, are taken care of at child welfare institutions.

Chang Xiaona, head of the center's rehabilitation division, said many more welfare institutions in other cities are also promoting inclusive education for children of different ages and with different health conditions.