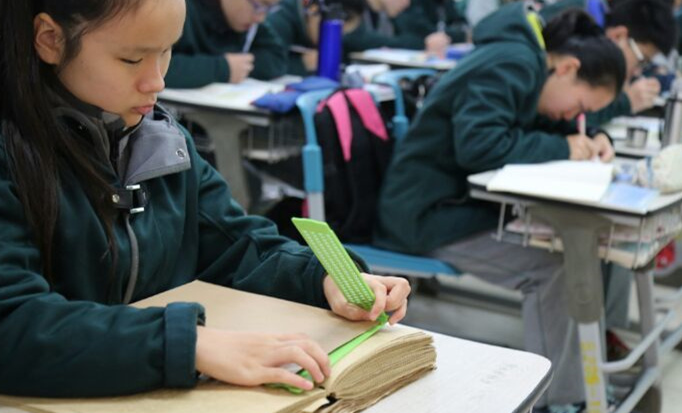 Chen Qian studied in a class at a mainstream middle school in Nanjing, Jiangsu province, at about age 13. (Photo: China Daily)

Chen Qian said it was sheer luck that she attended a mainstream grade school in Nanjing, Jiangsu province, about a decade ago. Later, her parents helped her secure a slot at an academically competitive middle school.

That was the highest the blind student went in the mainstream education system. "We couldn't find a high school willing to admit me, despite my decent academic performance," said the 19-year-old, who recently enrolled at Nanjing University of Chinese Medicine to study massage.

In 2015, the government ordered local exam authorities to provide "reasonable assistance" to disabled applicants taking the gaokao, the national college entrance exam, including longer test times and papers in Braille.

Since then, some places－including Shanghai and Fujian and Guangdong provinces－have started offering similar assistance to students taking the zhongkao, the high school entry exam.

In 2017, when Chen wanted to take the zhongkao, her request for assistance was refused. "There was no precedent for blind students to take the exam," she said.

Instead, she joined the provincial swimming team for blind athletes and attended a special high school during intervals in training.

After graduation, she took a vocational exam that runs parallel with the gaokao but is held a few months ahead of it. The exam is designed to recruit applicants for courses tailored for blind students, such as massage training.

"I think every disabled person should be given equal access to quality education," Chen said. "As long as they wish to attend a mainstream school, they should be allowed to."

She was one of a number of special needs students who fought their way into mainstream classrooms but didn't attend high school. Some said local authorities' resistance to reforming the zhongkao was a major reason many were unable to attend high school or university.

Zhou Qiuqiao knows that struggle all too well. Last year, her son, a seventh grader who is blind, faced a similar dilemma when seeking admission to a middle school in their hometown of Nanjing.

She said the city's education authorities would not let Zhu Xuan'ang take an exam that decides admission to local middle schools because there was no precedent and it was impossible to provide Braille test papers and other assistance just for one person.

After protests, Zhou reached a compromise with the authorities: Zhu would attend a nearby mainstream institution but register at a local special school. The arrangement is likely to cause trouble when Zhu wants to take the zhongkao and the gaokao, but Zhou said she has no alternative.

The former middle school Chinese teacher quit her job to care for Zhu a few years ago. Every night, she types his homework on a computer, which allows him to listen to the assignments via screen-reading software.

That would be impossible for less-educated or poorer parents, Zhou said, adding that she wants to make Zhu a precedent so more people like him can remain on mainstream campuses.

"Mainstream schools are the best vehicles for disabled students to integrate into society," she said.

"Blind schools are relatively insulated, and their graduates usually have a very narrow range of job opportunities."

Zhao Jihua, who served as a spokesman for the China Disabled Persons' Federation in the 1990s, said disabled people now have more access to a range of State benefits that can lift them out of poverty.

"But if their education rights cannot be fully ensured, there is always the risk that they will be marginalized. That will leave such people with fewer ways of living dignified lives," he said.