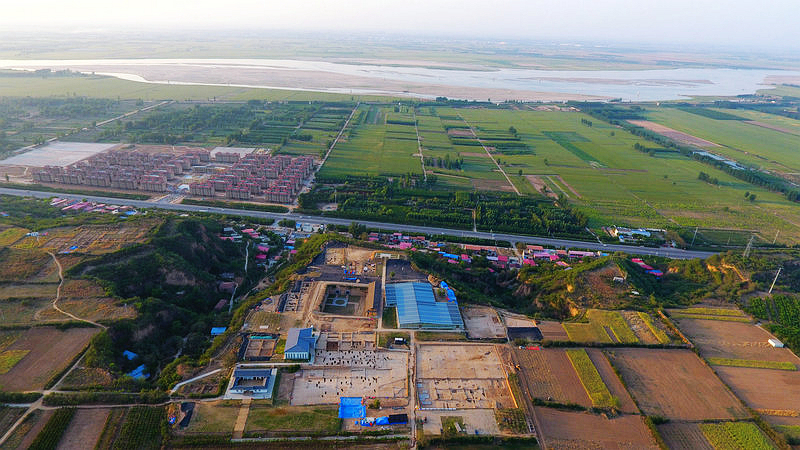 Gu Wanfa, head of Zhengzhou Municipal Research Institute of Cultural Relics and Archaeology, announced a series of significant archaeological findings at the Shuanghuaishu Site at a press conference in the provincial capital Zhengzhou on May 7.

The ruins of the ancient city were proposed by archaeologists to be named "Heluo Kingdom" after its location in the center area of Heluo region, where the Yellow River (known as He in ancient China) and the Luohe River meet.

Root of the Yellow River culture

Lying on the south bank of the Yellow River in the township of Heluo, Gongyi City, the site is one of China's major archaeological discoveries in the 21st century.

The site, which was about 1,500 meters long from east to west and 780 meters wide from north to south, covers a large area of 1.17 million square meters, where tremendous historic and cultural relics of great importance were unearthed.

Gu revealed at the press conference that a large number of relics of the Yangshao culture dating back 5,000 to 7,000 years have been discovered in the ancient city ruins, which was surrounded by three huge ring trenches with each found to have external access, forming a strict defense system.

"The site is the highest-standard cluster with the nature of a capital city discovered so far in the Yellow River basin in the middle and late stage of Yangshao culture, the early stage of the formation of the Chinese civilization," said Li Boqian, a professor at Peking University.

It has been a major topic for archaeologists to explore the origin of the Chinese civilization, and they have discovered several over-5,000-year-old cities in the Liaohe River Basin, the middle and lower reaches of the Yangtze River and other places, including Liangzhu Archaeological Site in east China's Zhejiang Province, which was inscribed on UNESCO's World Heritage List last year.

Wang believes that the mid-late civilization of Yangshao culture centered on the Shuanghuaishu site is indeed the root of the Yellow River culture, which can be called the "embryo of early Chinese civilization."

In the city ruins, the central residential area with four rows of houses was found in the northern part of the inner ring moat. Additionally, three public cemeteries with more than 1,700 tombs, three sacrificial remains, an astronomical relic, a pottery workshop area, a water storage area, a road system and other facilities were also found.

Among the unearthed relics is an item considered as a national treasure – a boar tusk carving of a silkworm, which is 6.4 cm long, nearly 1 cm wide and 0.1 cm thick.

It is believed to be China's earliest carving depicting spinning silkworms, a testimony related to the origin of silk proving that the residents in the middle reaches of the Yellow River had started silkworm breeding and silk reeling around 5,300 years ago.

Nine pottery pots were arranged in the pattern of the nine stars of the Big Dipper at the astronomical relic, which indicates that the ancestors of Heluo had relative mature astronomical knowledge to guide agricultural activities through observing the celestial phenomena.

According to the experts, a series of archaeological discoveries show that the "original development model of the Chinese civilization" represented by the Shuanghuaishu site attaches importance to people's livelihood, farming and sericulture, with more investment in social production instead of offering wealth to the gods.

The main concept of this model was inherited and carried forward by generations in mainstream society, becoming the most representative and leading development model in the following dynasties.