Discoveries may unveil origin of Beijing 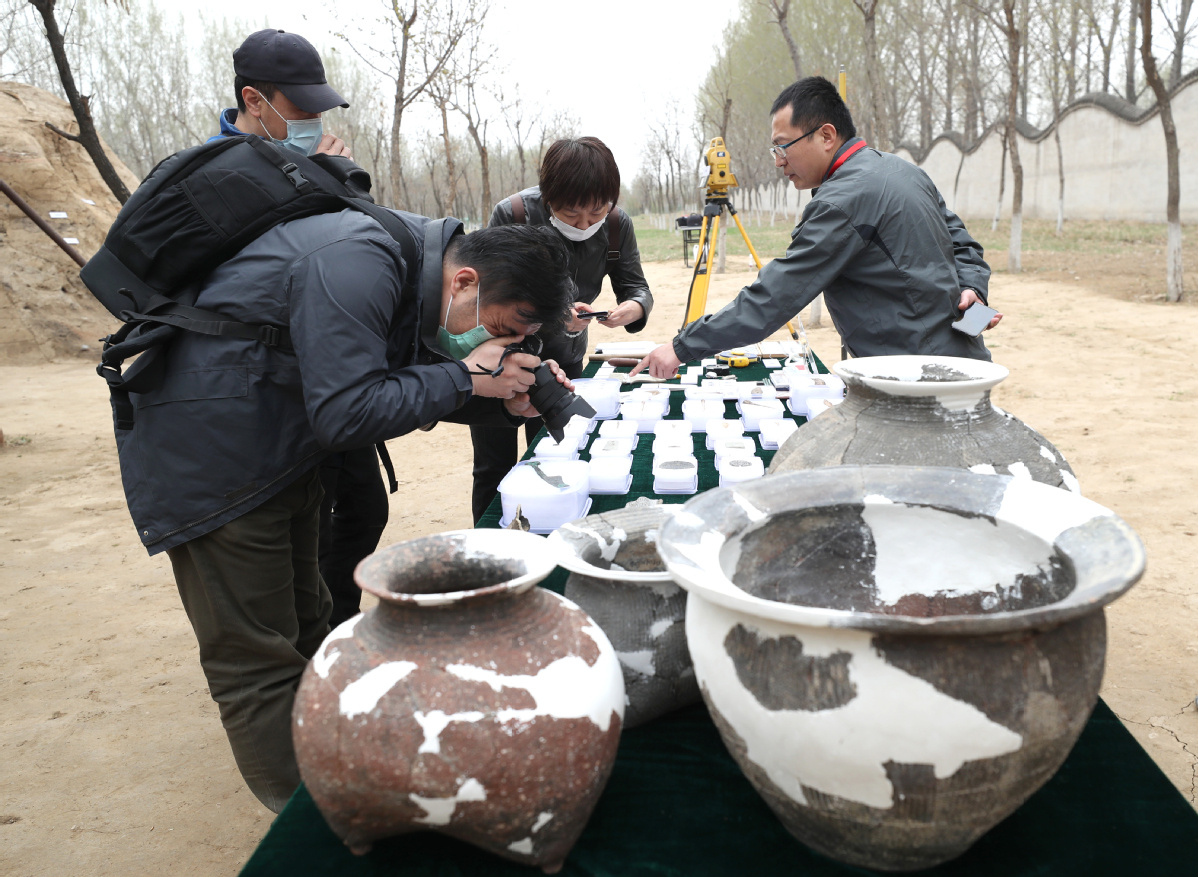 Newly unearthed artifacts are displayed to journalists at an excavation in Beijing's Fangshan district on Thursday. The dig uncovered the first well-preserved remnants of rammed earth construction in Liulihe, the site of the earliest known city ruins in Beijing. (Photo: China Daily)

Key archaeological findings were recently made at nearly 3,000-year-old city ruins on the outskirts of Beijing, the city's cultural heritage administration announced on Thursday.

In the northwest of the Liulihe site in Fangshan district, a complex of architectural remains with a clear layout was newly unveiled in an ongoing excavation, according to Wang Jing from the Beijing Archaeological Research Institute, who is also a leading archaeologist working on the site.

Based on her team's research, the constructions had been built using rammed earth. Each layer of earth was 8-to-12-centimeters high.

This is the first time this type of discovery has been made at Liulihe, the site of the earliest known city ruins in Beijing.

The part of the construction that has been revealed so far was 28 meters from east to west, and 26 meters from north to south. Its foundations were 1.62-meters-deep, and the wall was 40-cm thick.

"The earthen constructions are of good quality and belonged to a group of high-level architecture, echoing its status as the capital city of a vassal state," Wang said.

As historical documents showed, Beijing was where the capital of the Yan vassal state was located during the Western Zhou Dynasty (c. 11th century to 771 BC). The state later rose as a power during the Warring States Period (475-221 BC) before it was finally conquered by Qinshihuang as the northern frontier of his empire.

"This indicated that the construction was abandoned and rebuilt several times ranging from the early period of Western Zhou Dynasty to the late period of the dynasty," she said.

It also provided a glimpse into the origins of Beijing as a city. In spite of the fame of the Yan vassal state in history, the exact whereabouts of its capital city remained unknown for a long time.

In 1945, the War of Resistance Against Japanese Aggression (1931-45) was just over and a cement plant was planned to be built in the region. A bank manager who was in charge of providing a loan for the project accidentally noticed some ancient pottery shards when he checked the site.

As his brother was an archaeologist, he immediately realized the significance of these artifacts. He later took some samples to Su Bingqi, a famous Chinese archaeologist, who speculated that the pottery dated to the Shang (c. 16th to 11th century BC) or Western Zhou dynasties.

Following Su's guidance, the first archaeological excavation in the area was conducted by Peking University in the 1960s. Since then, Liulihe has become a highlight of archaeology in Beijing. In 1988, it was listed as a national-level key heritage site.

The site has witnessed many important discoveries such as the biggest ritual bronze item ever unearthed in Beijing. City walls, graveyards and handicraft workshops were among other key relics that have been found.

A new round of excavation at Liulihe started in 2019, and Wang said the ongoing work has basically figured out the layout of the urban area and the residential compounds of the city.

Hundreds of artifacts were unearthed including a bronze sword, bronze arrowheads, jade and stone relics. Over 20,000 pottery shards have also been excavated.

Unearthed carbonized crop seeds such as millet, wheat and soybean also help to portray a picture of a booming agricultural society, Wang said.

"The new findings give us a vital reference to understanding the governance and political system in the early history of China," Wang said.

"The unearthed relics have the characteristics of both agrarian culture in Central China and nomadic culture to the north," she added. "They showed the pivotal role that the Liulihe site once played in cultural communication."

According to the new plan, which guides related work until 2035, the protection zone will expand to 11.6 square kilometers from the current 7.1 square kilometers, within which urban construction will be strictly controlled. Villagers living near the site will be relocated to newly built residential areas.