After six days of intensive flying display performances by J-20 fighter jets at the Airshow China 2022, which concluded on Sunday in Zhuhai, South China's Guangdong Province, military observers pointed to more details that reflect the stealth aircraft's strong and increasing combat capabilities in terms of techniques and tactics as well as the number produced, which they believed can deter potential opponents including "Taiwan independence" secessionists and external interference forces. 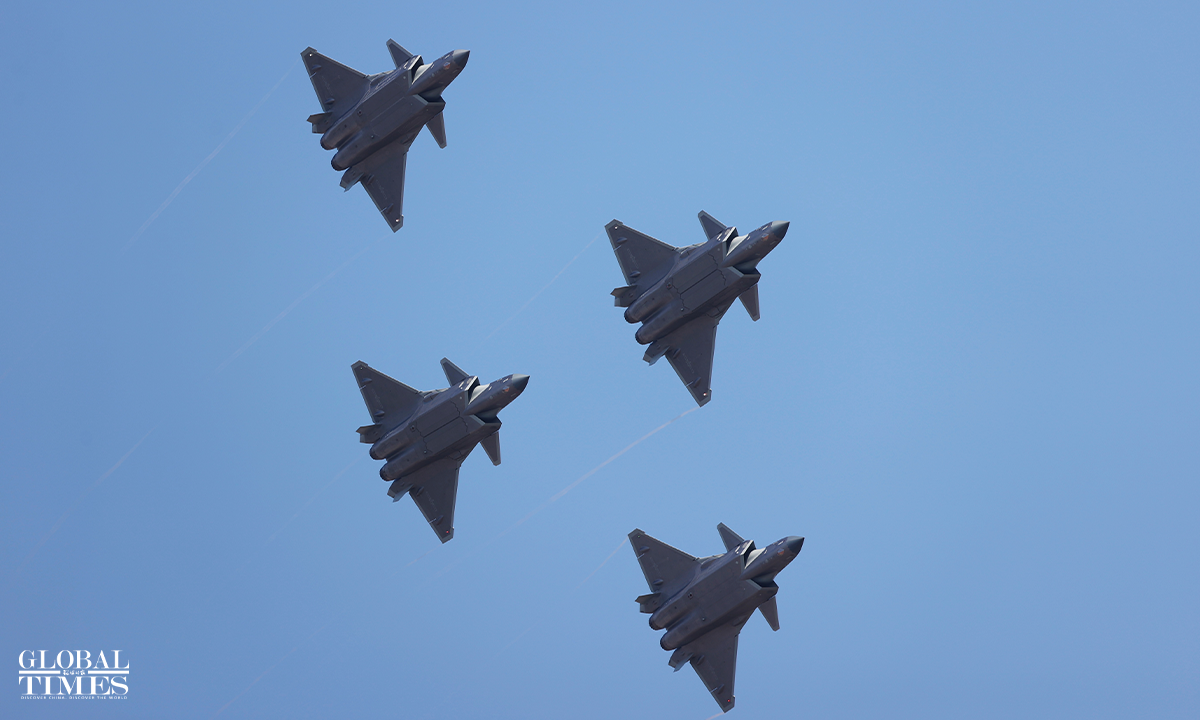 During the flight performances, a J-20 displayed a unique rolling maneuver. During the roll, the aircraft's nose kept changing the direction it was pointing to, drawing a circle with the axis of the flight path in its center, instead of the usual rolls shown by other aircraft, during which the nose would travel along the axis without changing direction.

The J-20 performed this maneuver not only when flying forward, but also when climbing.

This, together with some small-radius turns and climbs, displayed the J-20's outstanding maneuverability and its ability to point its nose at a target during a maneuver. These moves will win the J-20 advantages in air combat, Zhang Xuefeng, a Chinese military expert, told the Global Times after watching the J-20's performances.

This is realized through the unique aerodynamic design, which is an independent innovation of China, as well as China's domestically built engines, Zhang said.

Four J-20s flew in a diamond formation during the flight performances, and this is a large tactical unit with high combat-oriented significance, Song Zhongping, a Chinese military expert and TV commentator, told the Global Times.

Another highlight of the J-20s' display at this year's air show was their landings and takeoffs in front of the general public for the first time. When landing, the J-20s released drag parachutes, and when taking off, two J-20s lifted off at the same time.

Photographers who have seen landings and takeoffs of other warplanes told the Global Times at the air show site that the runway distance required for the J-20 to take off and land is very short.

This is of tactical significance because in combat, a runway could be targeted and damaged, and using only a small portion of undamaged runway to take off and land can greatly increase the warplane's operational capability. At the same time it could reduce the risk of getting hit during the process, analysts said.

During the static display after the landing of the J-20s, observers noted that there were what seemed to be construction numbers painted on the aircraft. Based on these numbers, US media outlet Defense News speculated that China has likely built more than 200 J-20s.

All these details reflected achievements by the Chinese People's Liberation Army (PLA) Air Force and the country's aviation industry, and they will serve as deterrents to potential opponents including "Taiwan independence" secessionists and external interference forces, showing that the PLA is fully capable of safeguarding national sovereignty, territorial integrity and development interests, experts said.