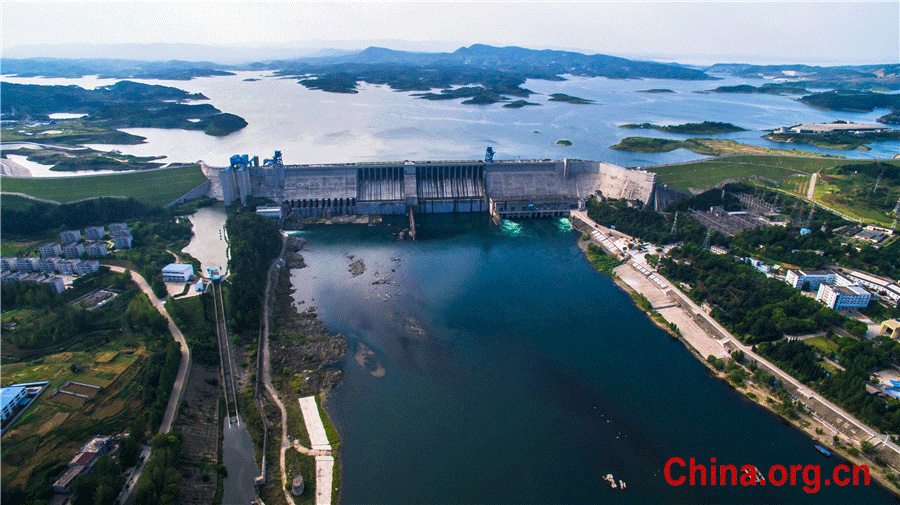 The Danjiangkou Dam in Hubei province. China's South-to-North Water Diversion project, the world's largest, is designed to take water from the country's longest river, the Yangtze, through eastern, middle and western routes to feed dry areas in the north. (Photo provided to China.org.cn)

ZHENGZHOU, Dec. 13 (Xinhua) -- China's first phase of the middle route of the south-to-north water diversion project has delivered more than 19 billion cubic meters of water to northern cities, according to the project office.

Over 53.1 million residents of 19 cities have benefited from the water diversion project that began in late 2014, said the office located in Xichuan County, Henan Province.

The water diverted from the Yangtze River has helped ease water shortages and ensure water security in cities such as Beijing, Tianjin, and Zhengzhou, the capital city of Henan.

The diversion has accounted for 73 percent of Beijing's daily tap water supply and helped increase the city's average water resource per capita by 50 percent.

In order to ensure quality water supply, the city of Nanyang in Henan where the project originates, has made great efforts in monitoring environment, enhanced sewage treatment, and closed or relocated a number of energy-intensive enterprises.

The south-to-north water diversion project, the world's largest, takes water from the Yangtze to feed dry areas in the north through eastern, middle and western routes.

The first phase of the middle route begins at Danjiangkou in Hubei and runs through Henan and Hebei before reaching Beijing and Tianjin.