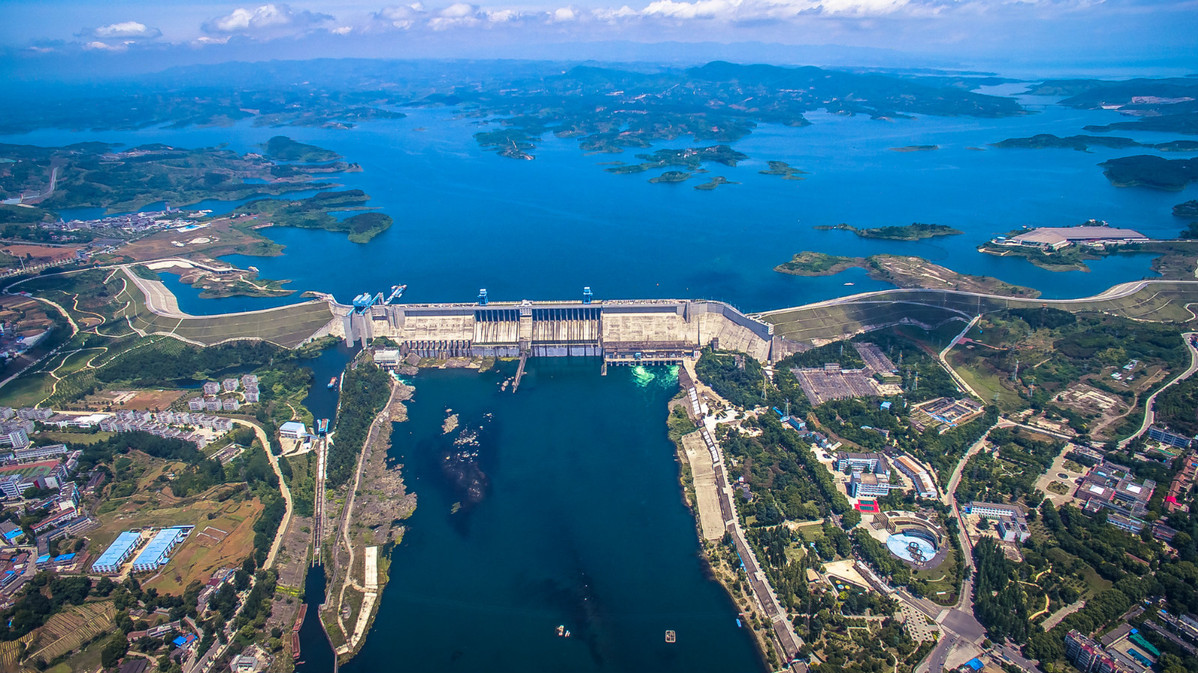 In the living room of Zhang Hongan's two-story house in Shiyan city, Hubei province, stand a battered desk and several old wooden stools, which seem at odds with the marble floor, leather sofa and modern appliances.

However, it's not unusual to find old items in the well-designed neighborhood that is home to 160 families who moved to higher ground 10 years ago. They relocated to ensure the viability of the South-North Water Diversion Project－the world's largest such undertaking－which carries supplies from the Yangtze River in China's south to the drought-prone north.

In 2009, the walls of the Danjiangkou Reservoir－the start of the middle route of the diversion project－on the Hanjiang River were raised to 176.6 meters as the water level rose to 170 meters.

More than 345,000 locals like Zhang, mostly farmers who lived in the area around the reservoir, moved to about 600 government-built villages across the central provinces of Hubei and Henan to avoid being flooded out of their homes.

The 68-year-old left his old wood-and-brick house and resettled on the outskirts of Shiyan, bringing along the tattered furniture that has accompanied him for over 20 years.

"I'm not a penny-pincher who is unwilling to purchase new things. It's just not easy to totally abandon my old home and community comforts. I kept this old stuff to help me rebuild my life from scratch," he said.

Even though there were hard feelings initially because people had to say goodbye to the land that had nourished them, they were compensated with new apartments equipped with running water, internet connections and indoor toilets－amenities lacking in their old homes. They were also given relocation money and skills training to help them adjust to their new lives. 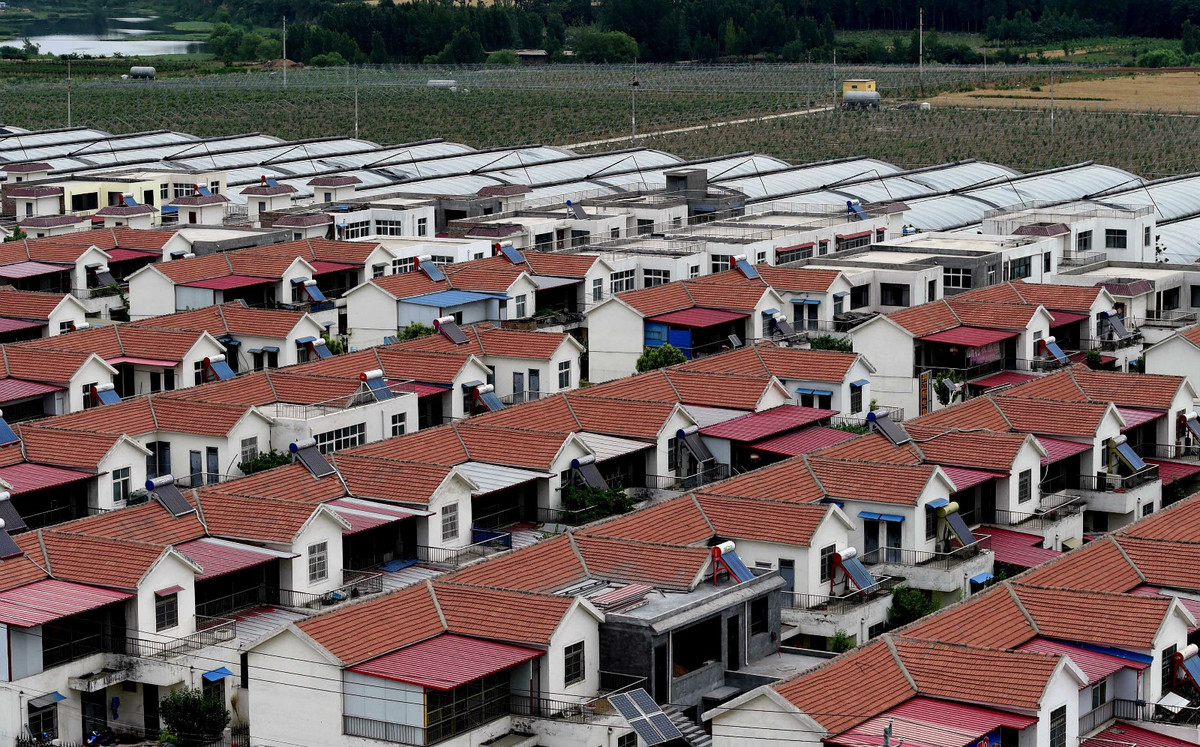 Wang Shicheng, from Erdaohe village in Shiyan, used to work in Shenzhen, Guangdong province. The 36-year-old decided to return to his hometown in the wake of the relocation project, when several factories were built as part of government efforts to boost living standards.

Like many of his youthful peers, Wang left for Shenzhen more than 15 years ago, because the old village－also called Erdaohe－could offer little but endless farm chores.

"I saw my grandfather and father living at the mercy of the weather and toiling on the mountains for decades. However, it didn't provide them with a good standard of living," he said.

Wang started work at an electronics factory in Shenzhen straight after graduating from high school. Though working and living in a big city was an eye-opening experience, his memories of, and relationships in, the small village made him homesick, luring him back from time to time.

After hearing that the government had built a number of factories and was providing villagers with free training to facilitate their move into the urban labor market, Wang and his wife joined the first batch of returnees.

Zhang Zhibin, Party secretary of Erdaohe, said: "As less arable land became available because of the water diversion project, a lot of villagers chose to transfer their land to the rural cooperative and become shareholders. They had been freed from farmwork and needed nonagricultural jobs."

However, they were relatively poorly educated, and most lacked skills. So, the local government provided a range of training, from making clothes to cooking, several times a year to help villagers land jobs when they finished their courses, he added.

According to the Ministry of Water Resources, the central government invested more than 4 billion yuan to assist the resettlement across the two provinces, in addition to providing over 150,000 people with training.

At a media briefing this month, Jiang Xuguang, vice-minister at the ministry, said, "The annual per capita income of people from Danjiangkou has reached more than 10,000 yuan ($1,426), much higher than before relocation."

Though Zhang's monthly salary of 4,000 yuan as a delivery driver for the factory is not as high as in Shenzhen, the job provides "a big bonus" because the workplace is just a 10-minute walk from his home, which allows him to take good care of his family.

"Now, we finally have more life choices at home, instead of being tied to the land. With improved infrastructure and more opportunities, it is a good place to enjoy my life," he said. 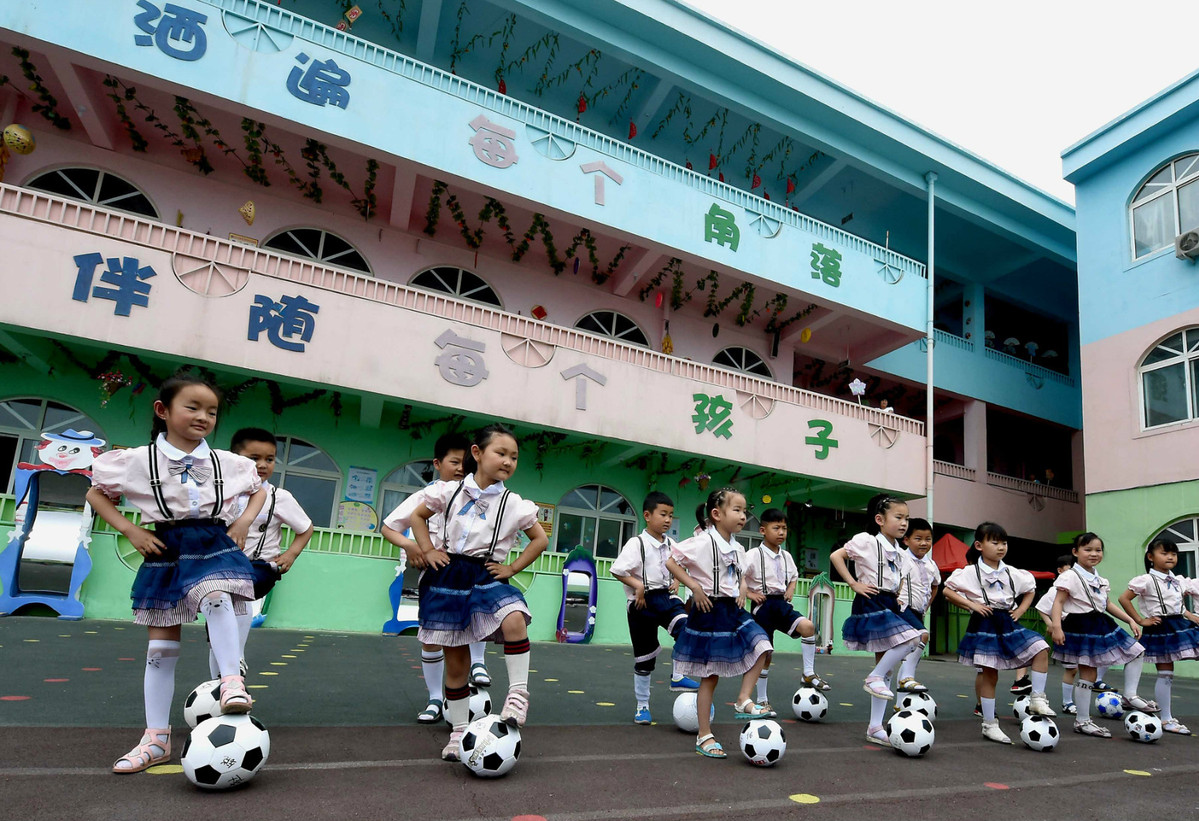 Children take part in soccer training at a kindergarten in a relocated village in Henan province in 2016. (Photo: Xinhua)

Statistics from the Shiyan relocation service center show that before 2014, when the middle route of the water diversion project began operating, 22,000 of those relocated lived below the national poverty line of 3,000 yuan per year. Now, they have all been lifted out of poverty.

As the project brings better lives to relocated families, more than 120 million people in northern China are tasting "sweet" changes.

The diversion project was first proposed by Chairman Mao Zedong more than 60 years ago because South China had abundant water resources, while the north had too few. The dream became reality when the first phase of the eastern route opened in late 2013, with the middle route becoming operational in December the following year.

To date, the two routes have transferred nearly 30 billion cubic meters of water to more than 40 cities and 260 counties in the north; enough to fill West Lake－a well-known attraction in Hangzhou, Zhejiang province－about 2,140 times, the ministry said.

Now, more than 73 percent of Beijing's tap water comes via the project, benefiting over 12 million residents, nearly half the population. Meanwhile, the project also supplies water to 14 districts in the northern port city of Tianjin, it added.

Liu Guangming, deputy head of the Beijing Water Authority, said that in the past five years, the capital has received more than 5.2 billion cubic meters of water from the Danjiangkou Reservoir. About 70 percent is supplied to waterworks, while the remainder is stored in large-and medium-sized reservoirs and used to replenish urban rivers and lakes. Liu noted that the city's underground water reserves have risen by 1.62 billion cubic meters as a result.

Zhou Jinxing, professor of soil and water conservation at Beijing Forestry University, said, "With such a huge amount of water feeding North China's dried-up rivers and shrunken lakes, the numbers of bird and aquatic species have seen marked growth and the ecological function of the water has been rehabilitated effectively."

The environmental benefits resulting from the project have brought real changes to many families who experienced the effects of Beijing's hard water, whose high mineral content furred kettles and other implements.

Weng Huayu, a Guangdong native who has worked in Beijing since 2012, is delighted with the improvement in water quality.

"The biggest concern before I came to Beijing was the dry, cold weather, but I didn't expect the water to be a nightmare," she said, adding that she was shocked when she first saw the thick mineral deposits in her kettle.

After that, she refused to drink tap water, using only purified or bottled water until the problem was solved in early 2015 by the low calcium and magnesium content of the diverted water.

The quality of the water transferred through the middle route－home to many bottled water factories－is constantly at or above grade two in China's five-tier quality scale for surface water, with 80 percent of sites providing grade one water, according to the authority.

Weng said, "The better-quality water means I don't have to always rinse out the shower nozzle, which used to be constantly clogged with mineral deposits."

Though China is on the right path, experts said the country should step up efforts to resolve the water supply-demand mismatch resulting from the growing population and increased urbanization.

Zhou, from Beijing Forestry University, said China is home to about 20 percent of the global population, but only has 6 percent of the world's freshwater resources, while per capita water availability is just one-fourth the global average.

"China's economy is still forging ahead, which will lead to surging demand for water," he said. "We have to appreciate the sacrifice of the people in Danjiangkou and cherish every drop."

When he was relocated, Zhang Hongan brought several orange trees from his old village to replant outside his new home. He didn't have high hopes that the trees would survive the abrupt change, but they flourished.

Now, the village is committed to developing rural tourism, as more tourists will arrive with the opening of a high-speed railway linking Wuhan, Hubei's capital, with the dam area.

With the help of the village committee, Zhang is considering turning his house into a homestay.

"The trees are thriving, why shouldn't we?" he asked.