An anesthesiologist convicted of killing his wife and daughter by placing a yoga ball that leaked carbon monoxide in their car has been sentenced to life in prison in Hong Kong.

Malaysian citizen Khaw Kim Sun, 53, had become estranged from his wife, Wong Siew Fing, 47, and their four children, although they continued to live together while he had an affair with a student. 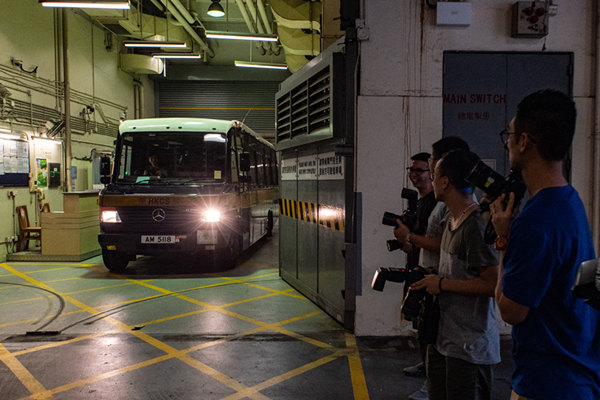 A prison van transporting Malaysian national Khaw Kim-sun, 53, who is accused of murdering his wife and daughter, leaves the High Court in Hong Kong on August 23, 2018. (Photo: AFP)

A jury of five men and four women found him guilty at Hong Kong's High Court after seven hours of deliberation Wednesday.

"It is shocking that a highly educated and successful man would conjure up such a calculated method to get rid of his wife," judge Judianna Barnes Wai-ling was quoted in media as telling Khaw.

Khaw was accused of putting the gas-filled yoga ball in the trunk of a Mini Cooper driven by his wife, Wong Siew-fung, on May 22, 2015.

Wong and their 16-year-old daughter were found unconscious in the car parked at a bus stop about an hour after leaving home. They were later declared dead from severe carbon monoxide poisoning, although the vehicle showed no defects such as a leaky emissions system

The case initially flummoxed Hong Kong police until the presence of the deflated yoga ball drew suspicion. Khaw was arrested in September after colleagues from the teaching hospital where he worked spoke with police.

Khaw reportedly obtained the carbon monoxide from the hospital. He told colleagues he wanted to "test its purity" and its effects on rabbits, according to accounts.

He reportedly told police he took the gas home to use it to exterminate rats at home, although a domestic helper employed by the family testified that they had no rodent problem.

While Khaw stood to inherit considerable amounts of property co-owned with Wong following her death, there was no apparent motive for killing his daughter, leading to speculation that her death was unintentional.